:
Cyperus species represent a group of cosmopolitan plants used in folk medicine to treat several diseases. In the current study, the phytochemical profile of Cyperus laevigatus ethanolic extract (CLEE) was assessed using UPLC-QTOF–MS/MS. The protective effect of CLEE at 50 and 100 mg /kg body weight (b.w.) was evaluated on hepatorenal injuries induced by thioacetamide (100 mg/kg) via investigation of the extract’s effects on oxidative stress, inflammatory markers and histopathological changes in the liver and kidney. UPLC-QTOF–MS/MS analysis of CLEE resulted in the identification of 94 compounds, including organic and phenolic acids, flavones, aurones, and fatty acids. CLEE improved the antioxidant status in the liver and kidney, as manifested by enhancement of reduced glutathione (GSH) and coenzyme Q10 (CoQ10), in addition to the reduction in malondialdehyde (MDA), nitric oxide (NO), and 8-hydroxy-2′-deoxyguanosine (8OHdG). Moreover, CLEE positively affected oxidative stress parameters in plasma and thwarted the depletion of hepatorenal ATP content by thioacetamide (TAA). Furthermore, treatment of rats with CLEE alleviated the significant increase in plasma liver enzymes, kidney function parameters, and inflammatory markers. The protective effect of CLEE was confirmed by a histopathological study of the liver and kidney. Our results proposed that CLEE may reduce TAA-hepatorenal toxicity via its antioxidant and anti-inflammatory properties suppressing oxidative stress.
Keywords:
smooth flatsedge; flavonoids; aurones; oxidative stress; hepatorenal injuries; inflammation markers; histopathology

Medicinal plants represent the most enriched resources for natural remedies worldwide [1,2,3]. Recently, medicinal plants and their byproducts have proved to be the main source of safe medicinal drugs because of their bioactive secondary metabolites [2,4]. Moreover, plants provide phytochemicals to manage and protect against a multitude of diseases, owing to minimal side effects, and/or low toxicity and costs, along with significant biological potentiality and availability [4]. All documented data reported a strong relationship between the biological activities, including anti-inflammatory, antioxidant, and hepatoprotective potentialities of medicinal herbs, and their bioactive metabolites [2]. Plant phytochemicals, including phenolic acids, organic acids, flavonoids, aurones, and others, are the main contributors to the hepatoprotective mechanism [4].
Plants belonging to the Cyperus genus (family Cyperaceae) are widely distributed around the world with several traditional uses [5,6]. Various byproducts from Cyperus plants displayed several potent biological and pharmaceutical potentialities, including anti-inflammatory [7], hepatoprotective [8], anti-ulcer [5,6], antimalarial [9], and antidiabetic [10] activities. Many secondary metabolites were identified in Cyperus plants, including phenolic acids, flavonoids, aurones, quinones [5,6,11,12], steroids, terpenes [13], and alkaloids [14], along with volatile oils [15,16]. The previous work on C. laevigatus aerial parts resulted in the characterization of some phenolic acids and flavonoids [7] alongside volatile components [16]. Essential oil, extracts, and metabolites derived from this plant were reported to possess significant antioxidant, anti-inflammation, antimicrobial, and anti-diabetic effects [7,16].
Thioacetamide (TAA), an organo-sulfur white crystal, has been reported to cause carcinogenic damage to the liver and thus used to induce rats’ hepatic injury [17]. The documented toxicological reports deduced the neurotoxic effect of TAA in animals and humans [18]. TAA may cause the generation of reactive oxygen species (ROS), destroying free radical scavenging mechanisms and some cellular ingredients such as DNA, lipids, and proteins, thus deteriorating cellular structures and functions [19].
The current study provides mechanistic insights on potential protective effects of CLEE against hepatorenal damage induced by thioacetamide. Comprehensive metabolites profiling of C. laevigatus ethanolic extract (CLEE) was described herein for the first time using UPLC-ESI–QTOF-MS/MS. Additionally, the protective effect of CLEE against thioacetamide-induced hepatorenal toxicity in rat models was assessed based upon biochemical and histochemical results.

UPLC-ESI-QTOF–MS/MS analysis of the ethanolic extract was performed to characterize the bioactive compounds of CLEE. A total of 94 compounds belonging to various classes were annotated, including organic and phenolic acids, flavones, aurones, and fatty acids. The base peak chromatogram is depicted in Figure 1 in negative ion mode. Compounds were identified based on molecular formula, MS/MS fragmentation pattern, the reported data in the literature, and the phytochemical dictionary of natural products, as listed in Table 1 and Figure 2, representing the first comprehensive phytochemical profiling of CLEE.

The administration of TAA led to a marked reduction in the rats’ body weight from the second week until the sixthweek (Table 2) by 19%, 19.5%, 28%, 27%, and 26% compared to the control, respectively. On the contrary, the rats that were given CLEE + TAA exhibited an insignificant gain of body weight until the fifth week. Only CLEE (100 mg/kg) in the sixth week significantly ameliorated the body weight gain by 11% compared to the TAA (p ≤ 0.05).

All the organic solvents used for extraction and chromatographic experiments, as well as the chemical reagents, were of analytical grade. The thioacetamide with a purity of 98.5%, 1,1,3,3-tetraethoxypropane (malondialdehyde), and glutathione were obtained from Sigma-Aldrich (Saint Louis, MO USA).

The whole plant of C. laevigatus L. was collected from Kafr Elsheikh Governorate (31°35′34.19″ N; 31°05′18.00″ E, Kafr Elsheikh) Egypt in March 2020. Ahmed M. Abdel Gawad, Professor of Plant Ecology, Botany Department, Faculty of Science, Mansoura University, Egypt, carried out the plant collection and authentication. A plant voucher specimen (Man-20-X17CL-56) was deposited in the Faculty of Science herbarium, Mansoura University, Egypt.
Afterward, 600 g of the air-dried whole plant was extracted with 70% aqueous ethanol at room temperature for five days and then filtered. This extraction step was repeated three times. All the extract was collected and then evaporated under vacuum until complete dryness afforded a dark black gum (28.3 g). The extract was kept in the refrigerator at 4 °C until the start of the analysis.

The UPLC-MS analysis was carried out with the same documented protocol and conditions as El-Newary, et al. [62] and Farrag, Abdallah, Khattab, Elshamy, Gendy, Mohamed, Farag, Efferth and Hegazy [6].

Adult male Wistar rats (150–160 g) were chosen from the animal house of the National Research Centre, Egypt. They were fed a standard pellet diet and water ad libitum and kept at adjusted temperature (22 ± 2 °C) with a 12 h light-dark cycle [63].
The overall study and animal handling were performed following the guidelines of the NRC ethics committee, National Institutes of Health, and Canadian Council on Animal Care [Acceptance No.: 19218]. The body weights of the rats were recorded weekly.
According to results of Elshamy, El-Shazly, Yassine, El-bana, Farrag, Nassar, Singab, Noji and Umeyama [7], CLEE was safe up to 5 g/kg b.w. without any mortality or toxic symptoms in rats.

Twenty-four rats were left for 14 days for acclimatization and then sorted equally into four groups. Group I (negative control group): All the rats in this group were administered orally with an equal volume of vehicles. Group II (positive control group): Rats were intraperitoneal (IP) administered with 100 mg/kg b.w. of TAA dissolved in distilled water [64]. Group III: Rats pre-treated with intragastric CLEE (50 mg/kg b.w.) dissolved in distilled water followed by treatment with TAA (IP). Group IV: Rats were pre-treated with intragastric CLEE (100 mg/kg b.w.) and treated with TAA (IP). The pre-treatment of used CLEE concentrations was performed half hour before the injection of TAA. The inductions of the rats by TAA were carried out three times weekly, while they were treated with CLEE daily throughout the experiment for 8 weeks.

At the end of the experimental period (8 weeks), the overall rats were euthanized using ethyl ether in a completely sealed container. The blood samples (3 mL each) were collected in heparinized tubes before euthanasia. The centrifugation for 15 min at 3000 rpm was carried out to isolate the plasma. The liver and kidney were rapidly removed and washed in ice-cooled saline. A weighted part of each tissue was homogenized with ice-cooled saline (0.9% NaCl) to prepare homogenate. The homogenate was centrifuged at 3000 rpm for 10 min at 5 °C using a cooling centrifuge [65]. The supernatant was used for various analyses. The remaining portion of the liver or kidney was fixed immediately in 10% neutral buffered formalin.

The liver and kidneys were dissected directly after the rats’ sacrifice for histopathological investigations. Aliquots of the liver and kidney tissues were fixed in 10% formalin in phosphate-buffered normal saline for 7 days. Then they were washed for 2 h under running tap water and dehydrated gradually in ethanol, followed by embedding in the paraffin wax. After that, the sections were de-paraffinized using xylene and stained with hematoxylin and eosin (H&E, 4–5 µm thick) (Mc, 1946). A light microscope (Olympus CX41, San Marcos, TX, USA) and SC100-digital camera attached to the computer system were used for the examination.

The variability of results was expressed as means ± standard error of means (n = 3, SE). Data were evaluated by one-way analysis of variance (ANOVA) followed by Tukey-Kramer multiple comparisons. The level of significance was accepted at p < 0.05. All the statistical assays were carried out using Graphpad Prism-8 (San Diego, CA, USA).

UPLC-ESI-QTOF–MS/MS analysis of CLEE derived from the whole plant resulted in the identification of 94 compounds belonging to various classes with relatively high concentrations of flavonoids and phenolic acid derivatives. Luteolin and tricin derivatives represented the main constituents in Cyperus laevigatus. CLEE exhibited antioxidant and anti-inflammatory effects against TAA-induced toxicity owing to the synergistic action of major phytochemicals detected in the former. A high dose of CLEE at 100 mg/kg b.w exhibited a higher protective effect against hepatorenal damage than did its lower dose at 50 mg/kg b.w. The possible mechanism of CLEE on the liver and kidney might implicate regulation of energy metabolism, oxidative stress, and inflammatory markers. The present findings reveal the protective effects of the main constituents of Cyperus laevigatus against hepatic and renal injuries. The results also suggest further and deeper biological evaluation to enrich the scientific background regarding using CLEE to manage various diseases. However, phytochemical studies should be evaluated to isolate and identify the significant compounds in CLEE, thus determining their precise mode of action and safety.

The publication of this article was funded by the Open Access Fund of Leibniz Universität Hannover. 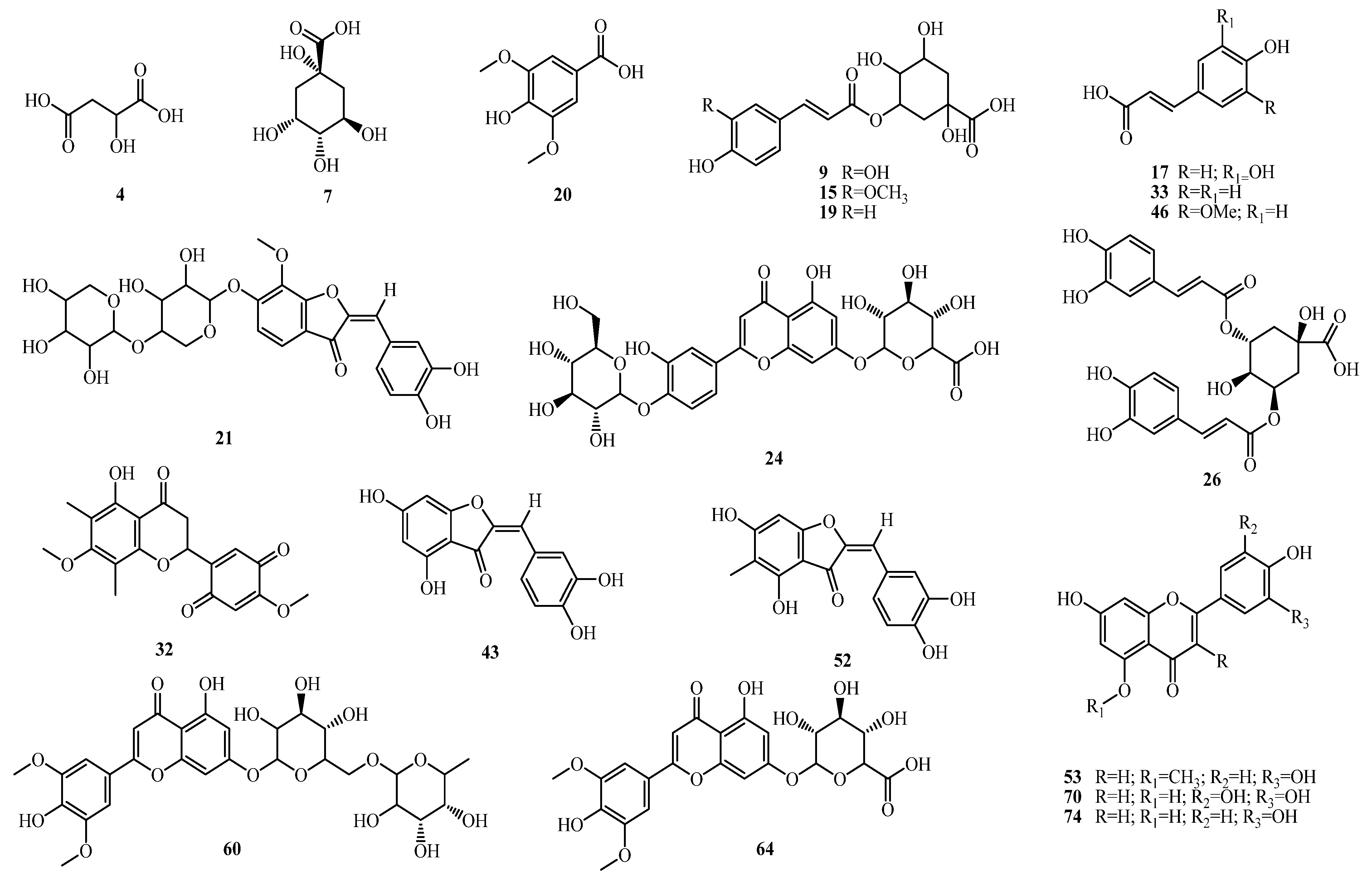 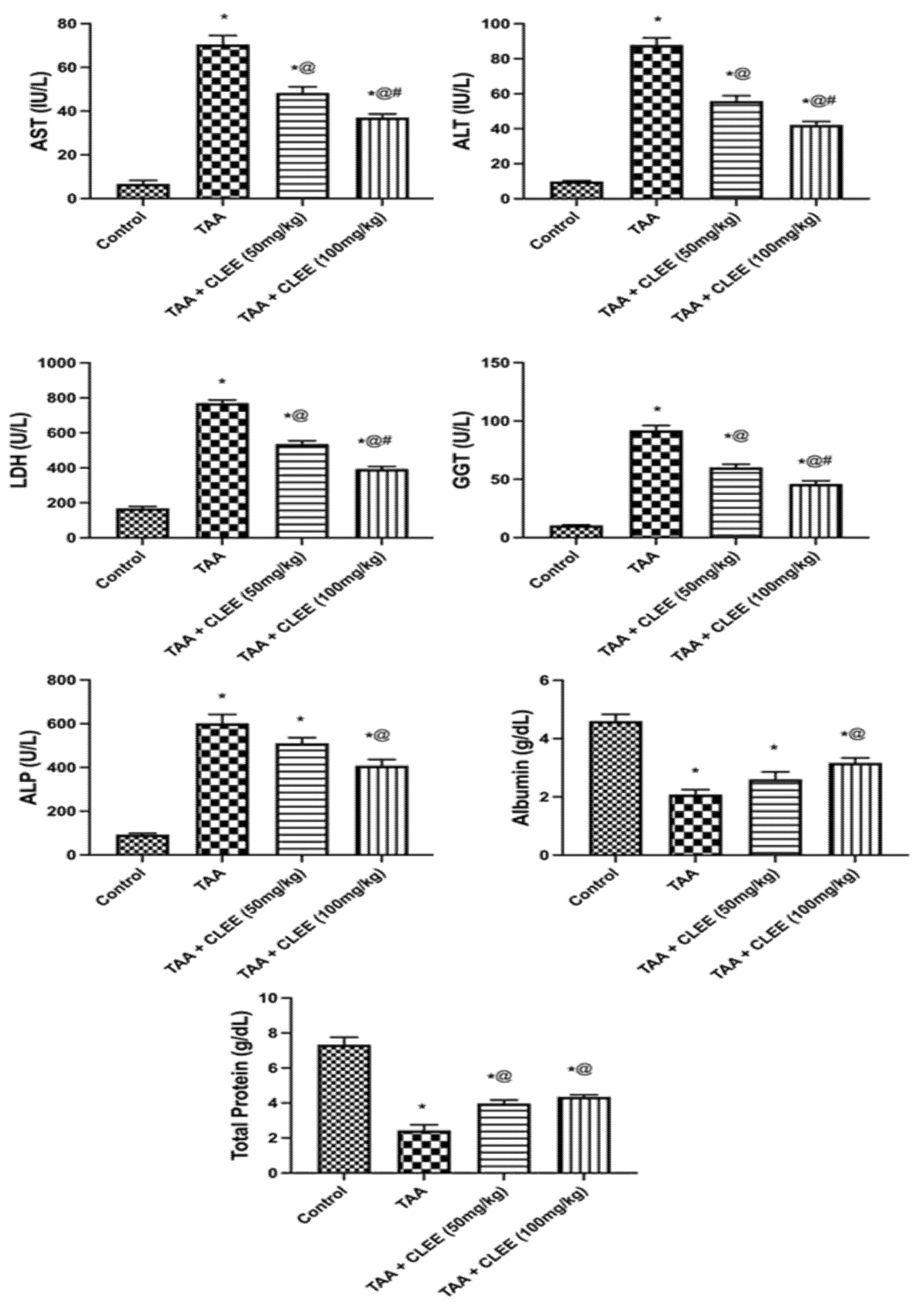 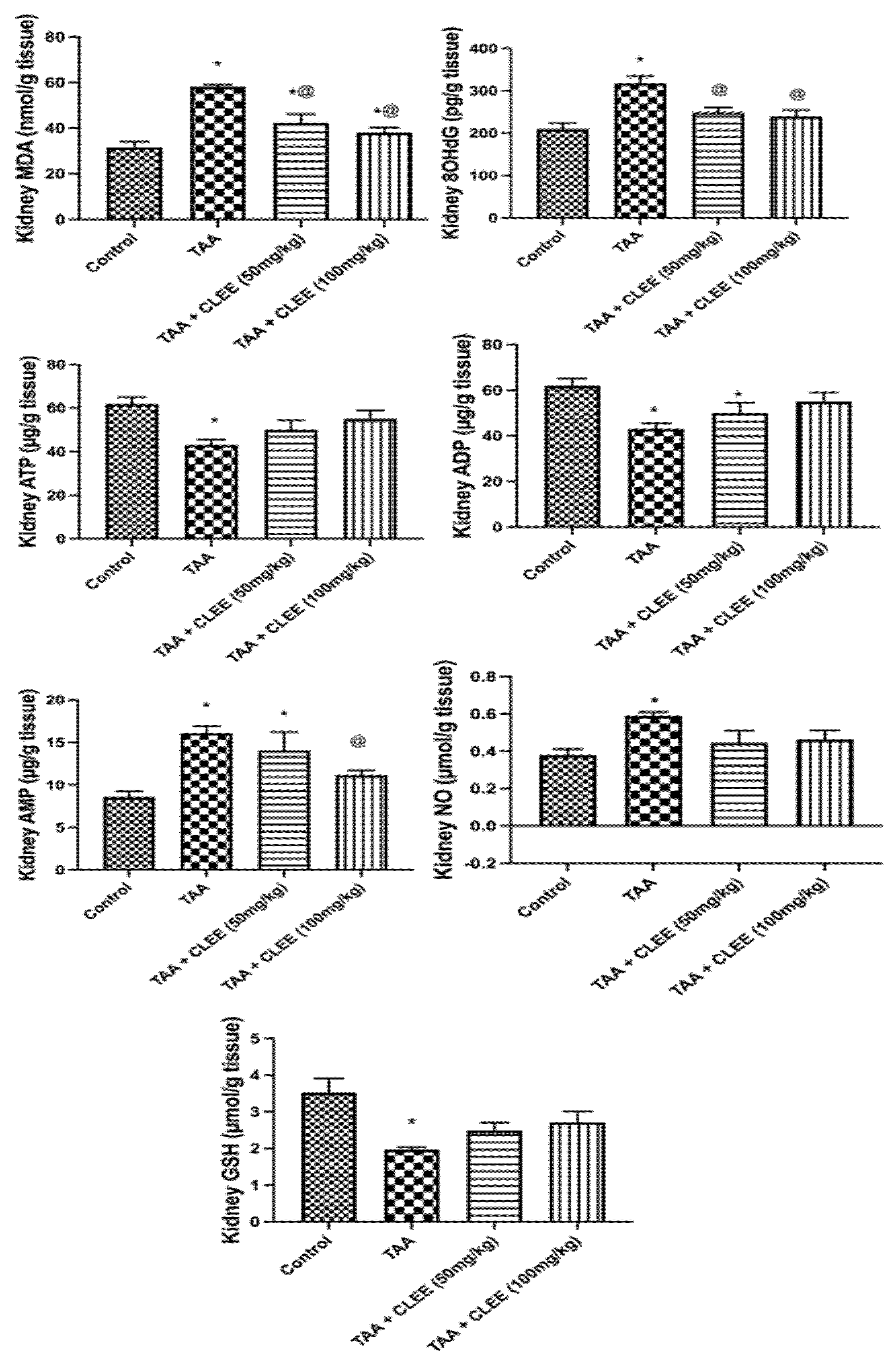 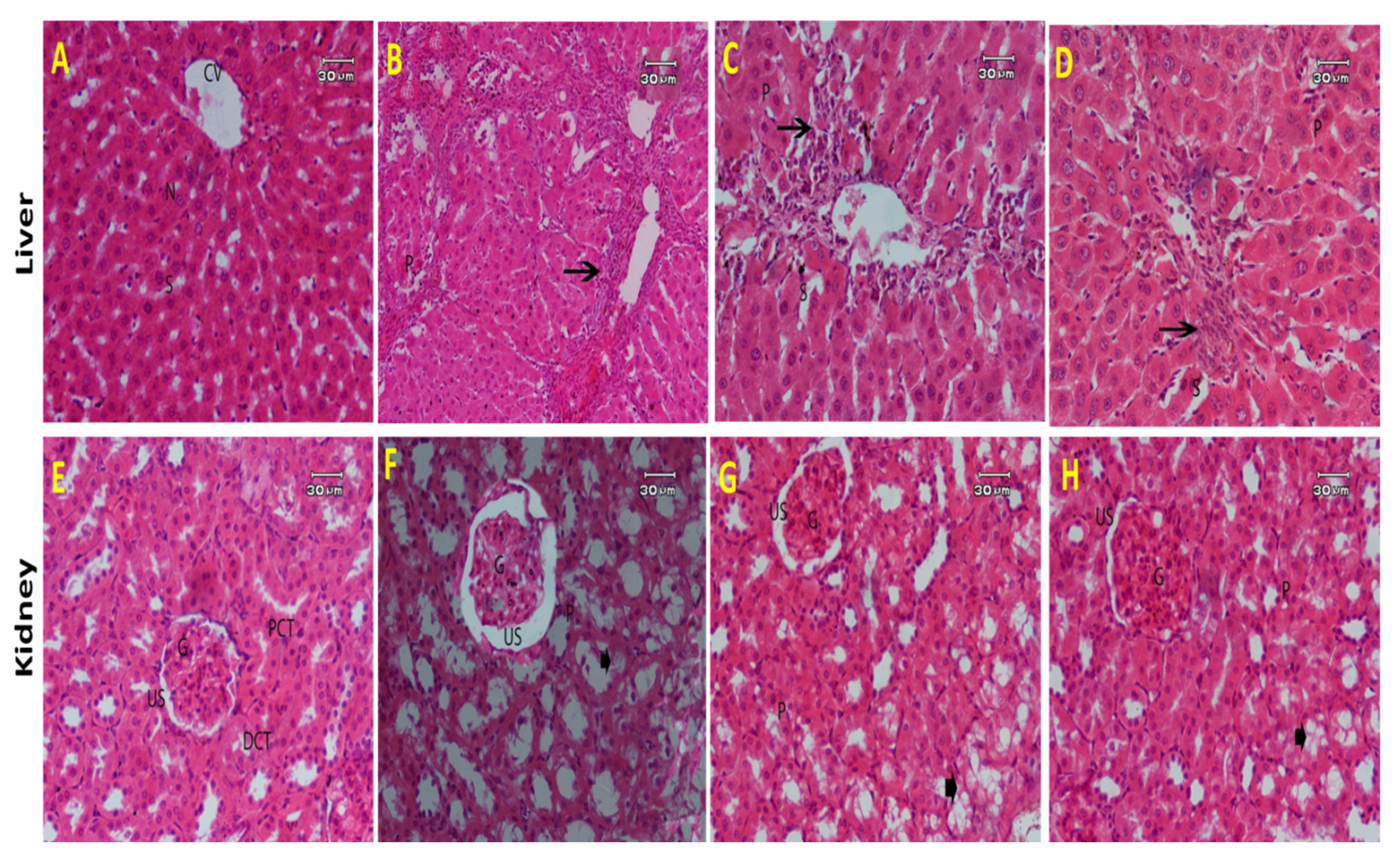