Hypogonadism, associated with low levels of testosterone synthesis, has been implicated in several diseases. Recently, the quest for natural alternatives to prevent and treat hypogonadism has gained increasing research interest. To this end, the present study explored the effect of S-allyl cysteine (SAC), a characteristic organosulfur compound in aged-garlic extract, on testosterone production. SAC was administered at 50 mg/kg body weight intraperitoneally into 7-week-old BALB/c male mice in a single-dose experiment. Plasma levels of testosterone and luteinizing hormone (LH) and testis levels of proteins involved in steroidogenesis were measured by enzymatic immunoassay and Western blot, respectively. In addition, mouse testis-derived I-10 cells were also used to investigate the effect of SAC on steroidogenesis. In the animal experiment, SAC significantly elevated testosterone levels in both the plasma and the testis without changing the LH level in plasma and increased phosphorylated protein kinase A (p-PKA) levels. Similar results were also observed in I-10 cells. The findings demonstrating the increasing effect of SAC on p-PKA and mRNA levels of Cyp11a suggest that SAC increases the testosterone level by activating the PKA pathway and could be a potential target for hypogonadism therapeutics. View Full-Text
Keywords: S-allyl cysteine; testosterone; protein kinase A S-allyl cysteine; testosterone; protein kinase A
►▼ Show Figures 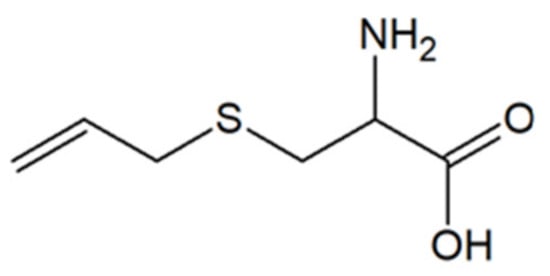