Reactivity of Aliphatic and Phenolic Hydroxyl Groups in Kraft Lignin towards 4,4′ MDI
Previous Article in Journal

As a low-input crop, Miscanthus offers numerous advantages that, in addition to agricultural applications, permits its exploitation for energy, fuel, and material production. Depending on the Miscanthus genotype, season, and harvest time as well as plant component (leaf versus stem), correlations between structure and properties of the corresponding isolated lignins differ. Here, a comparative study is presented between lignins isolated from M. x giganteus, M. sinensis, M. robustus and M. nagara using a catalyst-free organosolv pulping process. The lignins from different plant constituents are also compared regarding their similarities and differences regarding monolignol ratio and important linkages. Results showed that the plant genotype has the weakest influence on monolignol content and interunit linkages. In contrast, structural differences are more significant among lignins of different harvest time and/or season. Analyses were performed using fast and simple methods such as nuclear magnetic resonance (NMR) spectroscopy. Data was assigned to four different linkages (A: β-O-4 linkage, B: phenylcoumaran, C: resinol, D: β-unsaturated ester). In conclusion, A content is particularly high in leaf-derived lignins at just under 70% and significantly lower in stem and mixture lignins at around 60% and almost 65%. The second most common linkage pattern is D in all isolated lignins, the proportion of which is also strongly dependent on the crop portion. Both stem and mixture lignins, have a relatively high share of approximately 20% or more (maximum is M. sinensis Sin2 with over 30%). In the leaf-derived lignins, the proportions are significantly lower on average. Stem samples should be chosen if the highest possible lignin content is desired, specifically from the M. x giganteus genotype, which revealed lignin contents up to 27%. Due to the better frost resistance and higher stem stability, M. nagara offers some advantages compared to M. x giganteus. Miscanthus crops are shown to be very attractive lignocellulose feedstock (LCF) for second generation biorefineries and lignin generation in Europe. View Full-Text
Keywords: Miscanthus x giganteus; Miscanthus sinensis; Miscanthus robustus; Miscanthus nagara; lignin; monolignol ratio; low-input crops Miscanthus x giganteus; Miscanthus sinensis; Miscanthus robustus; Miscanthus nagara; lignin; monolignol ratio; low-input crops
►▼ Show Figures 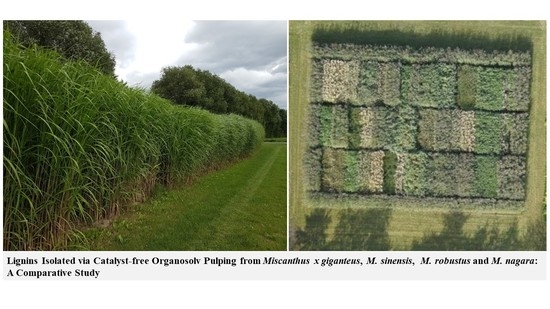