Plasma polymer coatings fabricated from Melaleuca alternifolia essential oil and its derivatives have been previously shown to reduce the extent of microbial adhesion on titanium, polymers, and other implantable materials used in dentistry. Previous studies have shown these coatings to maintain their performance under standard operating conditions; however, when used in e.g., a dental implant, these coatings may inadvertently become subject to in situ cleaning treatments, such as those using an atmospheric pressure plasma jet, a promising tool for the effective in situ removal of biofilms from tissues and implant surfaces. Here, we investigated the effect of such an exposure on the antimicrobial performance of the Melaleuca alternifolia polymer coating. It was found that direct exposure of the polymer coating surface to the jet for periods less than 60 s was sufficient to induce changes in its surface chemistry and topography, affecting its ability to retard subsequent microbial attachment. The exact effect of the jet exposure depended on the chemistry of the polymer coating, the length of plasma treatment, cell type, and incubation conditions. The change in the antimicrobial activity for polymer coatings fabricated at powers of 20–30 W was not statistically significant due to their limited baseline bioactivity. Interestingly, the bioactivity of polymer coatings fabricated at 10 and 15 W against Staphylococcus aureus cells was temporarily improved after the treatment, which could be attributed to the generation of loosely attached bioactive fragments on the treated surface, resulting in an increase in the dose of the bioactive agents being eluted by the surface. Attachment and proliferation of Pseudomonas aeruginosa cells and mixed cultures were less affected by changes in the bioactivity profile of the surface. The sensitivity of the cells to the change imparted by the jet treatment was also found to be dependent on their origin culture, with mature biofilm-derived P. aeruginosa bacterial cells showing a greater ability to colonize the surface when compared to its planktonic broth-grown counterpart. The presence of plasma-generated reactive oxygen and nitrogen species in the culture media was also found to enhance the bioactivity of polymer coatings fabricated at power levels of 10 and 15 W, due to a synergistic effect arising from simultaneous exposure of cells to reactive oxygen and nitrogen species (RONS) and eluted bioactive fragments. These results suggest that it is important to consider the possible implications of inadvertent changes in the properties and performance of plasma polymer coatings as a result of exposure to in situ decontamination, to both prevent suboptimal performance and to exploit possible synergies that may arise for some polymer coating-surface treatment combinations. View Full-Text
Keywords: plasma polymer; atmospheric pressure plasma; antibacterial polymer coatings plasma polymer; atmospheric pressure plasma; antibacterial polymer coatings
►▼ Show Figures 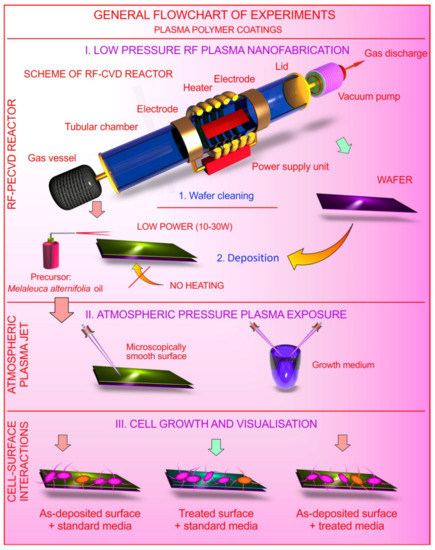 Russell J. Crawford
Professor Russell Crawford recently retired as the Executive Dean of the School of Science, College of Science, Engineering and Health at RMIT University. He was formerly the Dean of Science, Faculty of Science, Engineering & Technology, Dean, Faculty of Life & Social Sciences and Head, School of Biophysical Sciences and Electrical Engineering at Swinburne University of Technology. His research is in the area of surface and colloid science, with his early work focusing on the surface chemistry of mineral flotation and the removal of heavy metals from aqueous environments. His more recent research has investigated the ways in which biological organisms interact with solid substrate surfaces, particularly those used in the construction of medical implants.
Zoom | Orient | As Lines | As Sticks | As Cartoon | As Surface | Previous Scene | Next Scene
We use cookies on our website to ensure you get the best experience. Read more about our cookies here.
Accept
We have just recently launched a new version of our website. Help us to further improve by taking part in this short 5 minute survey here. here.
Never show this again