In this study, the antioxidant and antiradical properties of some phyto lignans (nordihydroguaiaretic acid, secoisolariciresinol, secoisolariciresinol diglycoside, and α-(-)-conidendrin) and mammalian lignans (enterodiol and enterolactone) were examined by different antioxidant assays. For this purpose, radical scavenging activities of phyto and mammalian lignans were realized by 2,2′-azino-bis (3-ethylbenzothiazoline-6-sulphonic acid) radical (ABTS•+) scavenging assay and 1,1-diphenyl-2-picrylhydrazyl radical (DPPH) scavenging assay. Additionally, the reducing ability of phyto and mammalian lignans were evaluated by cupric ions (Cu2+) reducing (CUPRAC) ability, and ferric ions (Fe3+) and [Fe3+-(TPTZ)2]3+ complex reducing (FRAP) abilities. Also, half maximal inhibitory concentration (IC50) values were determined and reported for DPPH• and ABTS•+ scavenging influences of all of the lignan molecules. The absorbances of the lignans were found in the range of 0.150–2.320 for Fe3+ reducing, in the range of 0.040–2.090 for Cu2+ reducing, and in the range of 0.360–1.810 for the FRAP assay. On the other hand, the IC50 values of phyto and mammalian lignans were determined in the ranges of 6.601–932.167 µg/mL for DPPH• scavenging and 13.007–27.829 µg/mL for ABTS•+ scavenging. In all of the used bioanalytical methods, phyto lignans, as secondary metabolites in plants, demonstrated considerably higher antioxidant activity compared to that of mammalian lignans. In addition, it was observed that enterodiol and enterolactone exhibited relatively weaker antioxidant activities when compared to phyto lignans or standard antioxidants, including butylated hydroxytoluene (BHT), butylated hydroxyanisole (BHA), Trolox, and α-tocopherol. View Full-Text
Keywords: phenolic compounds; lignan; antioxidant activity; antiradical activity; reducing power phenolic compounds; lignan; antioxidant activity; antiradical activity; reducing power
►▼ Show Figures 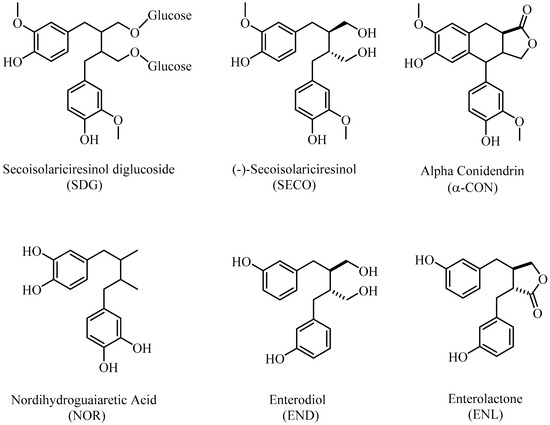