Enthalpies of Adduct Formation between Boron Trifluoride and Selected Organic Bases in Solution: Toward an Accurate Theoretical Entry to Lewis Basicity

The Lewis basicity of selected organic bases, modeled by the enthalpies of adduct formation between gaseous BF3 and bases in dichloromethane (DCM) solution, is critically examined. Although experimental enthalpies for a large number of molecules have been reported in the literature, it may be desirable to estimate missing or uncertain data for important Lewis bases. We decided to use high-level ab initio procedures, combined with a polarized continuum solvation model, in which the solvated species were the clusters formed by specific hydrogen bonding of DCM with the Lewis base and the Lewis base/BF3 adduct. This mode of interaction with DCM corresponds to a specific solvation model (SSM). The results essentially showed that the enthalpy of BF3 adduct formation in DCM solution was clearly influenced by specific interactions, with DCM acting as hydrogen-bonding donor (HBD) molecule in two ways: base/DCM and adduct/DCM, confirming that specific solvation is an important contribution to experimentally determined Lewis basicity scales. This analysis allowed us to conclude that there are reasons to suspect some gas-phase values to be in error by more than the stated experimental uncertainty. Some experimental values in DCM solution that were uncertain for identified reasons could be complemented by the computed values. View Full-Text
Keywords: BF3 enthalpies; Lewis basicity; specific solvation; high-level ab initio calculations; dichloromethane; boron trifluoride BF3 enthalpies; Lewis basicity; specific solvation; high-level ab initio calculations; dichloromethane; boron trifluoride
►▼ Show Figures 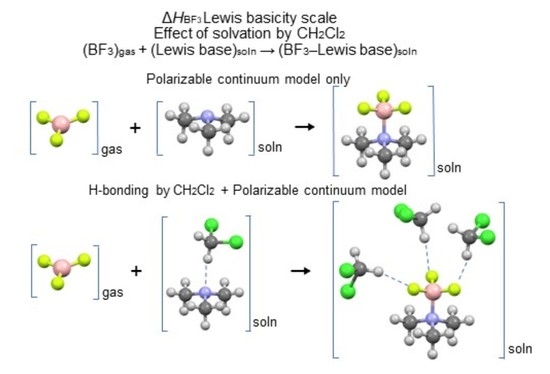