Products derived from the plant Cannabis sativa are widely appreciated for their analgesic properties and are employed for the treatment of chronic neuropathic pain. Only nabiximols, a product composed of two extracts containing similar percentages of the two cannabinoids cannabidiol and delta-9-tetrahydrocannabinol, is approved by regulatory authorities for neuropathic pain and spasticity due to multiple sclerosis in many European countries and Canada. It is also included in pharmacovigilance systems monitoring the occurrence of adverse drug reactions. However, it is not the same for the great variety of other cannabis preparations widely used for medical purposes. This creates a situation characterized by insufficient knowledge of the safety of cannabis preparations and the impossibility of establishing a correct risk–benefit profile for their medical use in the treatment of chronic neuropathic pain. With the aim to explore this issue more deeply, we collected data on adverse reactions from published clinical studies reporting the use of cannabis for neuropathic relief.
Keywords: Cannabis; cannabinoids; neuropathic pain Cannabis; cannabinoids; neuropathic pain

Chronic pain is a common condition characterized by pain that lasts 12 weeks or more. One in five adults in Europe, or 75 million people, suffer moderate to severe pain [1]. There are three main types of pain: neuropathic, nociceptive, and nociplastic. Nociceptive pain derives from activity in neural pathways, secondary to actual tissue damage or potentially tissue-damaging stimuli. Neuropathic pain originates from lesions or dysfunction of the central or peripheral nervous system [2]. Nociplastic pain arises from altered nociception, despite no clear evidence of actual or threatened tissue damage causing the activation of peripheral nociceptors, or no evidence of disease or lesion of the somatosensory system causing the pain [3].
The plant Cannabis sativa has been appreciated for its medicinal properties, and its medical use in Asia dates back to ancient times. Over the centuries, however, there was dwindling interest in the health benefits of cannabis, which was renewed in the 1990s with the description of cannabinoid (CB) receptors and the identification of the endogenous cannabinoid system [4]. Cannabis sativa has more than 60 oxygen-containing aromatic hydrocarbon compounds, known as cannabinoids. Most of their effects seem to be mediated through cannabinoid receptors, two types of which have been isolated and cloned, CB1 and CB2. CB1 receptors are distributed widely in the nervous system and seems to have a general role in the inhibition of neurotransmitter release, whereas CB2 receptors are mainly found on cells of the immune system [5]. The most known cannabinoids are delta-9-tetrahydrocannabinol (THC) and cannabidiol (CBD). THC acts as a psychotomimetic agent and is responsible for most of the adverse effects (AEs) associated with the use of cannabis. CBD is not psychotomimetic, while it seems to counteract the negative effects of THC [6]. A very high binding affinity of THC with the CB1 receptor appears to mediate its effects. CBD has little binding affinity for either CB1 or CB2 receptors, but is capable of antagonizing them in the presence of THC. In fact, CBD behaves as a non-competitive negative allosteric modulator of CB1 receptor and reduces the efficacy and potency of THC [7].
Neuropathic pain (NP) is typically characterized by positive (gain of somatosensory function) and negative (loss of somatosensory function) sensory symptoms and signs [8]. Chronic NP can develop from either peripheral or central NP conditions. The International Association for the Study of Pain (IASP) published its latest classification of NP; the subtypes of chronic peripheral NP are as follows: trigeminal neuralgia (TN), chronic NP after peripheral nerve injury, painful polyneuropathy, post-herpetic neuralgia, and painful radiculopathy. Chronic central NP subtypes include chronic central NP associated with spinal cord injury (SCI) or brain injury, chronic central post-stroke pain, and chronic central NP associated with multiple sclerosis (MS) [9]. There is no single diagnostic test or pathognomonic symptom to identify NP; hence, clinical acumen is required. In this light, neuropathic screening tools have been developed as diagnostic aids, including the Leeds Assessment of Neuropathic Symptoms and Signs (LANSS), the Neuropathic Pain Questionnaire (NPQ), Douleur Neuropathique 4 Questions, and painDETECT [10]. Nabiximols (marketed as Sativex), composed of two extracts containing similar parts of CBD and THC extracts, is a cannabis-derived drug approved for neuropathic pain and spasticity due to multiple sclerosis in many European countries and Canada [11]. Authorized by regulatory agencies in different countries, Sativex is included in pharmacovigilance systems monitoring the occurrence of adverse drug reactions. The regulations are not the same for the great variety of cannabis preparations widely used for medical purposes, which has led to a situation where there is insufficient knowledge of the safety of cannabis and it is impossible to establish a correct risk/benefit profile for its medical use. Cannabis preparations that are not licensed as drugs are mostly used for pain [12].
It has been observed that plant-derived cannabinoids act on different pain targets. Together with their activity on cannabinoid receptors, on which THC action is prevalent, these substances exert their analgesic effects by interacting with G protein-coupled receptor (GPCR) 55 and other pharmacological targets, such as opioid and serotonin receptors [13,14]. CBD is also considered an inverse agonist to GPR3, GPR6, and GPR12 receptors, which are involved in the occurrence of neuropathic pain [15]. The analgesic effects of THC and CBD have been associated with the potentiation of α3 glycine receptors, which are widely diffused in the spinal cord dorsal horn and act as modulators of inflammatory pain [16].
With the aim of gaining an overview of the safety of cannabis use for NP relief, we selected published scientific articles describing results on efficacy and reporting the frequency and severity of adverse reactions to cannabis preparations administered for this medical purpose.

Bibliographic research was carried out independently by two researchers (blinded to the authors) in major scientific databases (PubMed, Scopus, and Google Scholar) and a search engine of peer-reviewed literature on life sciences and biomedical topics. The investigators used the keywords “cannabis” and “pain” alone and in combination. All articles written in the English language and published in peer-reviewed scientific journals describing clinical trials and applications of cannabis extracts (CE) in oral or inhaled form for chronic neuropathic pain relief were collected and discussed. According to the PRISMA statement, PICOS (population, intervention, comparison, outcome) elements that formed the basis of this are showed in the Table 1.
The following types of scientific articles were excluded: case series, case reports, and animal studies; publications that made no reference to AEs; publications not written in the English language; studies investigating only THC or CBD individually; studies carried out using nabiximols or oromucosal/sublingual spray preparations; studies based on oncological patients; studies using co-administration of cannabis and opioids; and studies based on recreational cannabis use (Figure 1).

4. Quality and Risk of Bias Assessment

Low-quality clinical trials can contain errors caused by processing the results, and consequently analyzing them can lead to distorted conclusions. Quality assessment is required to prevent clinical application of inaccurate results [32]. The Risk of Bias of included RCTs was assessed according to the Cochrane RoB 2.0 (Risk of Bias 2.0), which consists of five domains and an overall judgment. The five domains are the following: (1) bias arising from the randomization process; (2) bias due to deviations from the intended interventions; (3) bias due to missing outcome data; (4) bias in measurement of the outcome; and 5) bias in selection of the reported result. Based on the answers (yes, probably yes, probably no, no, not applicable, no information) to a series of signaling questions, the judgment options within each domain consist of “low risk of bias”, “some concerns”, or “high risk of bias” [33].
According to the guidance document RoB2 recommendations, 10 of 15 studies collected [17,20,22,23,24,25,26,28,29,30] in the present article can be considered at low risk of bias. For both the two studies of Ellis et al., 2009 [27] and Killestein et al., 2002 [31], assessment of risk of bias puts in evidence a bias as a result of deviation from intended interventions. For the remaining three studies [18,19,21] assessment was not applicable (Table 3). 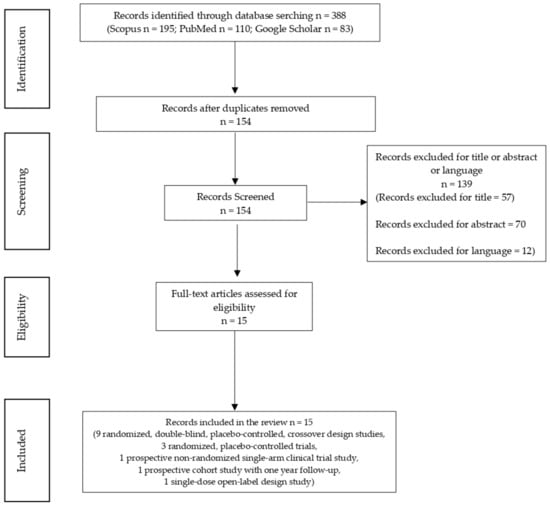 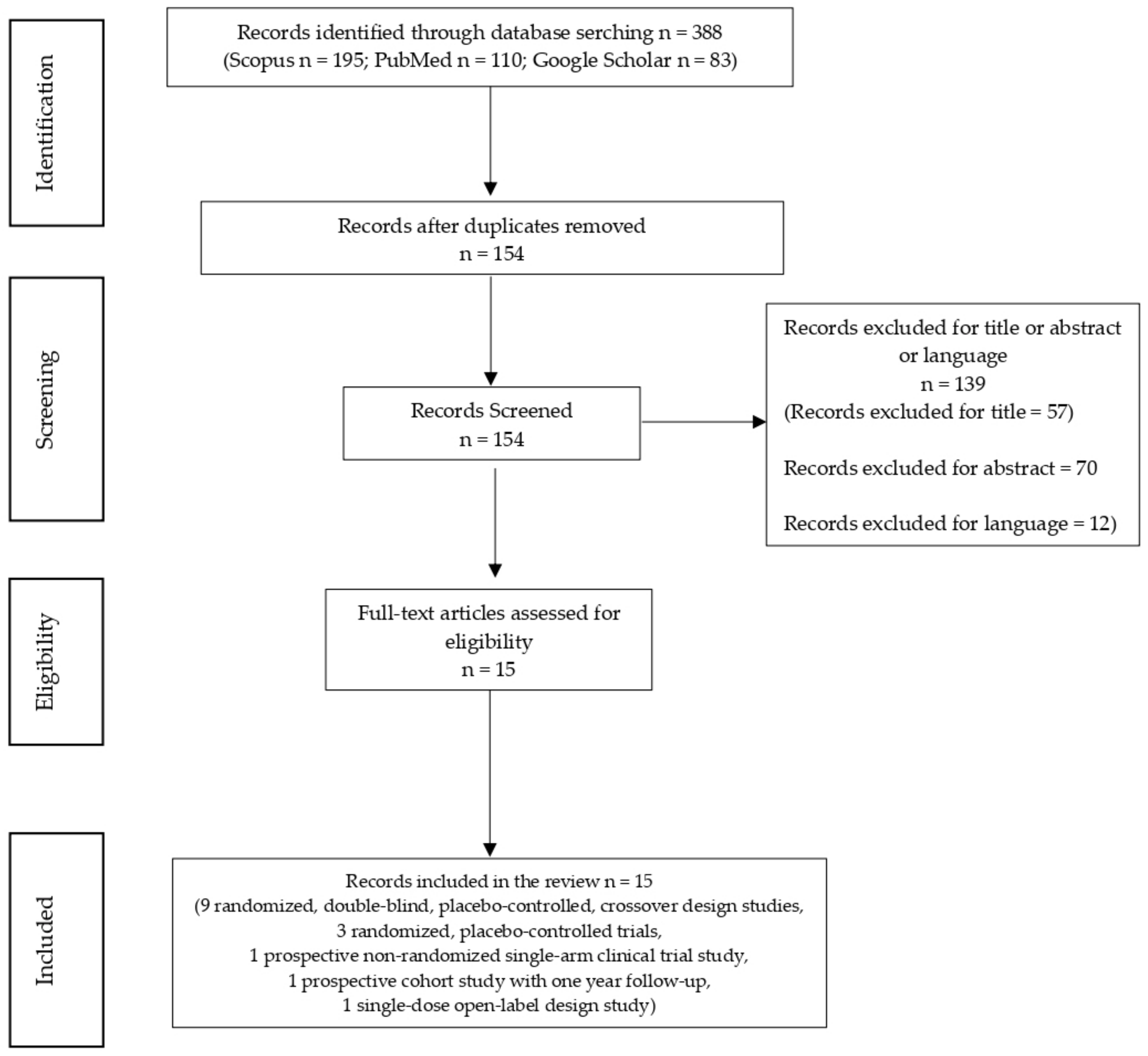 Table 3. Risk of Bias assessment.
Table 3. Risk of Bias assessment.
NA = Not applicable because there were not RCTs.
© 2021 by the authors. Licensee MDPI, Basel, Switzerland. This article is an open access article distributed under the terms and conditions of the Creative Commons Attribution (CC BY) license (https://creativecommons.org/licenses/by/4.0/).
We use cookies on our website to ensure you get the best experience. Read more about our cookies here.
Accept
We have just recently launched a new version of our website. Help us to further improve by taking part in this short 5 minute survey here. here.
Never show this again