In contrast to their bulk counterparts, two-dimensional materials, such as graphene, exhibit unique electronic properties and ultra-high specific surface areas. These unusual characteristics result in energy band structures sensitive to external perturbations and attract significant research interest [1]. Recently, Kondo et al. successfully synthesised hydrogen boride (HB) nanosheets [2]. The synthesis method involves the 3-day reaction of layered bulk magnesium diboride (MgB2) powder with an ion-exchange resin in an organic solvent to promote the exfoliation of MgB2. This is the first experimentally synthesised borophane (hydrogenated borophene), which is composed of sp2-bonded boron, forming hexagonal boron networks with bridge hydrogens. The chemical composition of the material is HB, where the hydrogen/boron atomic ratio is 1/1. Previous experiments have shown that hydrogen boride sheets have a high H2 content (8.5 wt %) [2], unique electronic properties [3,4], solid acid catalytic properties [5,6], photoinduced hydrogen release capability [7], and a unique ability to reduce metal ions to form nanocomposites [8,9,10]. In addition, theoretical models and computer simulations demonstrate that borophane is a promising candidate for applications such as anode material, alcohol gas sensors, current limiters, and photodetectors [11,12,13,14].
At present, studies on the synthesis of hydrogen boride have been carried out only for a powder sample obtained from finely dispersed MgB2 [2,3,4,5,6,7,8,9,10]. However, hydrogen boride thin films deposited on substrates would offer better opportunities for the in-depth analysis of the physical properties and investigation of possible applications of this material. Thus far, there has been no research on well-defined thin films of hydrogen boride. The epitaxial growth of hydrides is quite a challenging objective, owing to their thermal and chemical instability in air and multiple charged states [15,16,17].
Herein, we have developed a facile method for the fabrication of thin films of hydrogen boride using an ion-exchange treatment of deposited MgB2 films under ambient temperature and pressure. Firstly, oriented MgB2 films on SrTiO3 (STO) substrates were prepared by pulsed laser deposition (PLD). Afterwards, the deposited MgB2 films were treated with an ion-exchanger in an organic solvent to fabricate hydrogen boride films. Thin films wherein B-H bonds were introduced were successfully synthesised by using two types of ion-exchangers: proton exchange resin and formic acid. We also observed significant hydrogen release from these films under ultraviolet (UV) light irradiation.

The MgB2 thin films were deposited on SrTiO3 (100) single-crystal substrates by PLD using the fourth harmonic wavelength (266 nm) of a neodymium: yttrium aluminium garnet (Nd: YAG) laser. The substrate size was 1.0 × 1.0 cm2. The thin film deposition was performed under argon partial pressure of 1.0 mTorr and substrate temperature of 700 °C. A high-purity single-phase MgB2 film was deposited via a two-step deposition using subsequently two targets: a metallic magnesium (Mg) target pellet for 10 min and an MgB2 pellet for 60 min for the same substrate. The former process was necessary to compensate for the Mg supply in the MgB2 film because of the high volatility of Mg. The Mg pellet was prepared by uniaxial pressing using Mg powder, while the MgB2 pellet was prepared using commercial powder.

Two different types of ion-exchange method were employed to treat the deposited MgB2 thin films: the first method involved a 3-day reaction with a cation-exchange resin (400 mg) that was ground in an agate mortar in acetonitrile while referencing the previous report [2]. As an alternative ion-exchange method, a solution of 3.6 mL of acetonitrile and 0.4 mL of formic acid as a proton donor was prepared according to the report by Kawamura et al. [25], and MgB2 thin films were immersed into the solution for either 3 h or 2 d. Both treatments were conducted at room temperature and atmospheric pressure in a glovebox (<1 ppm O2) to prevent air exposure. The ion-exchanged film samples were washed with acetonitrile and dried under a nitrogen atmosphere.

X-ray diffraction (XRD) measurements were performed using a Rigaku Smartlab X-ray diffractometer (45 kV, 200 mA, radiation source: Cu(Kα1)). The film thickness was measured using a laser microscope. We evaluated the height difference between the MgB2 thin film and the bare STO substrate near the edge of the thin film.
Hard X-ray photoemission spectroscopy (HAXPES) measurements were performed at BL15XU of SPring-8 (Super Photon Ring 8 GeV, Hyōgo Prefecture, Japan). The excitation photon energy and total energy resolution were set to 5.95 keV and 240 meV, respectively. The measurements were taken at room temperature and the pressure of the analysis chamber of HAXPES was 1.1 × 10−7 Pa. Details of HAXPES experiments at BL15XU were described elsewhere [26].
Time-of-flight secondary ion mass spectroscopy (TOF-SIMS) depth profile analyses were performed using a TOF-SIMS 5-100-AD. The analysis parameters were as follows: primary ion source, Bi3++; energy, 60 keV; area, 100 × 100 μm2. The sputtering parameters were as follows: sputtering ion source, O2; energy, 2 keV; area, 300 × 300 μm2. To investigate the relationship between the actual depth and the sputtering time of the TOF-SIMS, the depth of the rastered area by ion beam was measured using a laser microscope and the sputtering rate was estimated.
Fourier-transform infrared spectroscopy (FT-IR) spectra were recorded using an FT/IR-6100 (MCT detector). The MgB2 film was too thin for the detection of the FT-IR signals of B-H and/or B-H-B bonds. Thus, an additional FT-IR analysis was conducted using ion-exchanged MgB2 powder by an attenuated total reflection (ATR) method using a diamond holder. For FT-IR analysis, MgB2 powder was treated in the same manner as the MgB2 film. Atomic force microscopy (AFM) images were obtained in dynamic imaging mode using an SPM-9700 with a silicon cantilever. Scanning electron microscope (SEM) images were obtained using a JEM-2010F (6.0 kV).

A film sample was placed in a quartz cell (3.5 mL with septum screw cap) under a nitrogen atmosphere without any solvent. Hydrogen production in the quartz cell under near-UV light irradiation was evaluated by gas chromatography (Tracera-GC-2010 Plus with a BID detector, Shimadzu, Co., Ltd., Japan). A film sample was placed under dark conditions for 1 h, followed by UV irradiation for 2 h. Hydrogen generation was determined by the difference in hydrogen amounts before and after the UV irradiation. UV irradiation was performed using a mercury-xenon (Hg-Xe) lamp with a 340 nm band-pass filter, similar to previous reports [7]. As a control experiment, the MgB2 film without an ion-exchange treatment was also evaluated in the same manner as the ion-exchanged films.

We established a fabrication process for protonated boride films by using a facile ion-exchange under ambient temperature and atmospheric pressure. This is the first report of HB thin film fabrication on a substrate. The oriented MgB2 thin films were prepared by a two-step PLD method and protons were successfully introduced into the films by treatment with either ion-exchange resin or formic acid in an organic solvent. Depending on the treatment conditions, the films with different characteristics such as proton content and surface structure have been obtained. The irradiation treatment on thin film with near-UV light produces hydrogen gas, similar to the powder HB samples. The present study is the first to demonstrate light-induced hydrogen release from a protonated boride thin film. This study will provide a method to fabricate thin films with B-H bonds, which will be useful for further studies or device applications.

The HAXPES measurements were performed with an approval of NIMS Synchrotron X-ray Station (Proposal Nos. 2020A4600 and 2020A4650). We thank Genseki at the Open Facility Center, Tokyo Institute of Technology, for the TOF-SIMS analysis. This work was supported by JSPS Kakenhi (Grant No. JP18H02055, JP19H02551, JP19H05046:A01, JP21H00015:B01). This work was also financially supported by the MEXT Element Strategy Initiative to Form Core Research Center (JPMXP0112101001), MHI Innovation Accelerator LLC, Iketani Science and Technology Foundation, the UBE Industries Foundation, and Sanoh Industrial Co., Ltd. 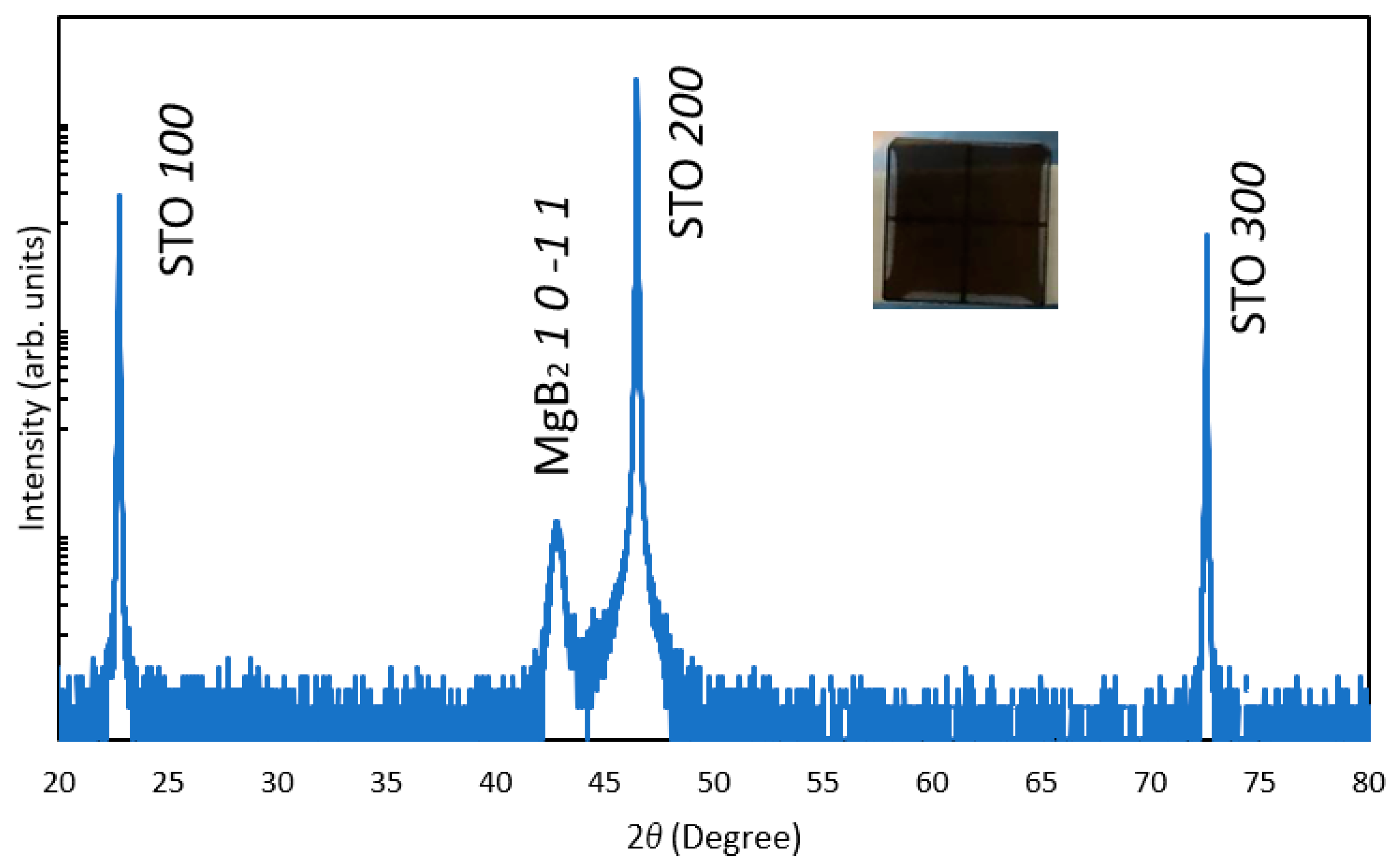 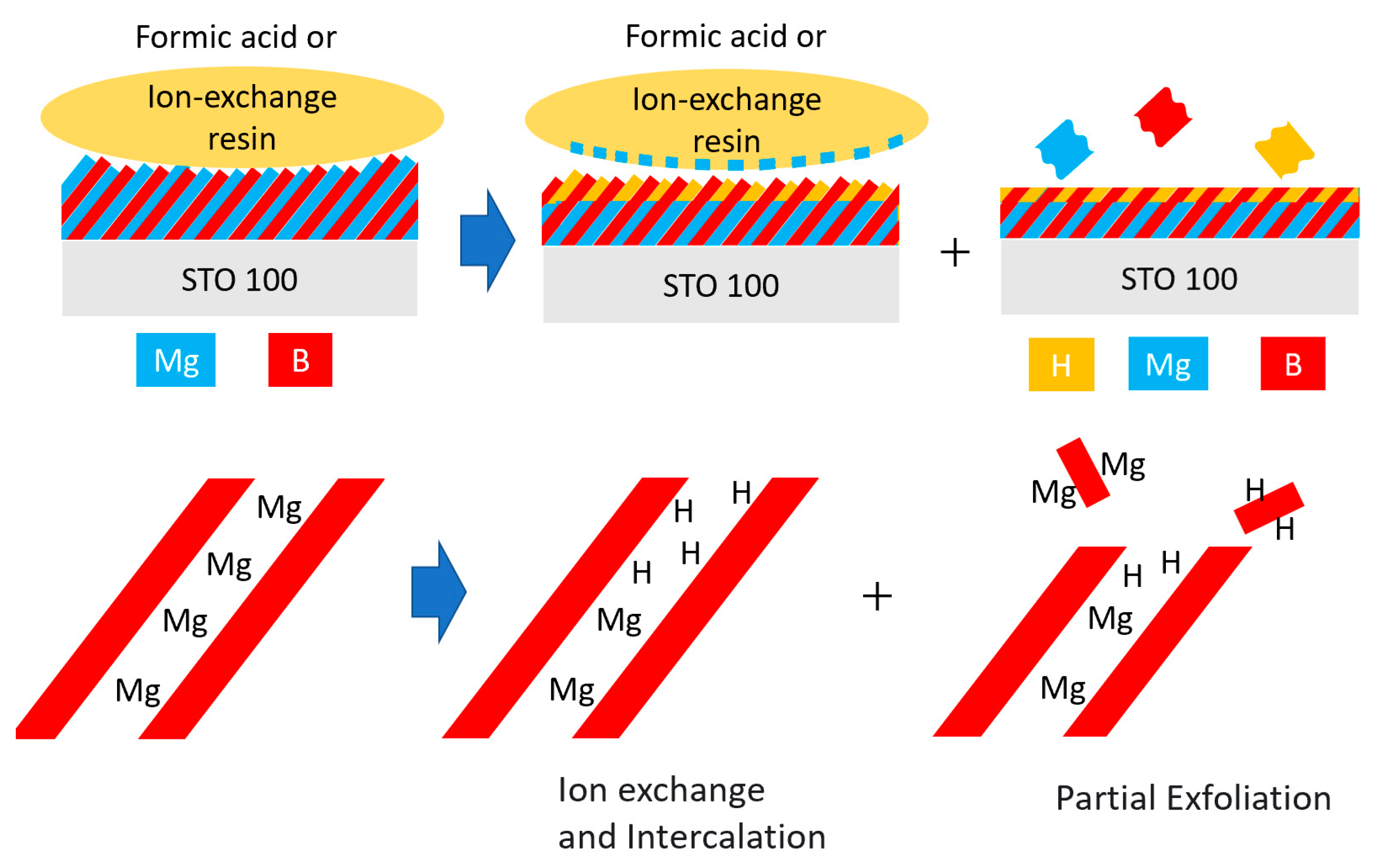