A simple lattice model has been used to study the formation of multilayer films by fluids with orientation-dependent interactions on solid surfaces. The particles, composed of two halves (A and B) were allowed to take on one of six different orientations. The interaction between a pair of differently oriented neighboring particles was assumed to depend on the degrees to which their A and B parts overlap. Here, we have assumed that the AA interaction was strongly attractive, the AB interaction was set to zero, while the BB interaction was varied between 0 and . The ground state properties of the model have been determined for the systems being in contact with non-selective and selective walls over the entire range of BB interaction energies between 0 and . It has been demonstrated that the structure of multilayer films depends on the strengths of surface potential felt by differently oriented particles and the interaction between the B halves of fluid particles. Finite temperature behavior has been studied by Monte Carlo simulation methods. It has been shown that the bulk phase phase diagram is qualitatively independent of the BB interaction energy, and has the swan neck shape, since the high stability of the dense ordered phase suppresses the possibility of the formation of disordered liquid-like phase. Only one class of non-uniform systems with the BB interaction set to zero has been considered. The results have been found to be consistent with the predictions stemming form the ground state considerations. In particular, we have found that a complete wetting occurs at any temperature, down to zero. Furthermore, the sequences of layering transitions, and the structure of multilayer films, have been found to be the same as observed in the ground state. View Full-Text
Keywords: multilayer adsorption; orientation-dependent interactions; Monte Carlo simulations multilayer adsorption; orientation-dependent interactions; Monte Carlo simulations
►▼ Show Figures 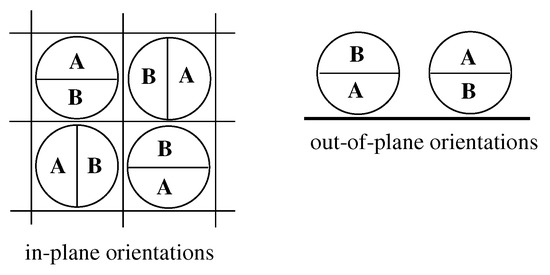