Interaction of Natural Compounds in Licorice and Turmeric with HIV-NCp7 Zinc Finger Domain: Potential Relevance to the Mechanism of Antiviral Activity
Previous Article in Journal

Diabetic nephropathy (DN) is a common complication reported to occur in approximately 30–40% of diabetic patients, which if not properly managed could result in end-stage renal disease [1]. DN is characterized by increased kidney size and expansion of glomerular volume in early phase of the disease, whereas glomerulosclerosis, tubular atrophy, fibrosis of the interstitium and declined renal function, which presents as increased levels of serum creatinine, urea and uric acid, occur as the disease progress [2]. Studies have shown that DN occurs as a result of hyperglycemia-induced increased reactive oxygen species (ROS) production, which triggers renal oxidative stress, inflammation, apoptosis and fibrosis [1,3]. Animal studies have reported decreased nuclear factor erythroid 2-related factor 2 (Nrf2) protein levels and accompanying decreased antioxidant enzymes activities in the kidney of diabetic rats [2,3]. Furthermore, nuclear factor kappa B (NF-κB) activation, which leads to upregulation of inflammatory cytokines and activation of pro-apoptotic proteins, has also been reported in the kidneys of diabetic rats [4]. The multimechanistic ROS-induced DN necessitates antioxidant supplementation in DM.
The use of natural products in the management of diseases is gaining popularity because of their reported multimechanistic beneficial effects. Propolis, a gluey mixture formed by honeybees from plant materials and their secretions, is reported to have multiple health benefits. In vitro studies on propolis have reported the inhibition of α-amylase and α-glucosidase activities, thus, justifying its anti-hyperglycemic effect [5,6]. Animal and human studies have demonstrated the health benefits of propolis in pathological conditions. Chinese propolis, for example, was reported to improve antioxidant status of diabetic patients after 18 weeks of intervention [7]. In animals, propolis has been reported to have antioxidant, anti-diabetic, anti-inflammatory, anti-apoptotic and anti-bacterial effects [8,9,10,11]. Furthermore, propolis has been reported to protect the reproductive system from diabetes [12,13], heavy metal [14] and chemotherapy-induced [15] impairments.
We previously reported in vitro α-glucosidase inhibition and antioxidant activity of Malaysian propolis (MP) obtained from the stingless bee Heterotrigona itama [5]. We also reported that MP decreased blood glucose and increased serum insulin level in diabetic rats, and attributed these effects to decreased pancreatic oxidative stress, inflammation and beta cell apoptosis, and improvement in pancreatic beta cell proliferation [5]. On the basis of our previous report, we designed the present study to assess the effects of MP on DN, which is caused majorly by hyperglycemia-induced increase in ROS production. In recognition of the multifactorial complications of diabetic nephropathy, the present study also investigates the possible synergistic effect of metformin (Met) and MP in halting the progression of diabetic nephropathy at early onset, thus leveraging on the anti-hyperglycemic and antioxidant activities of both therapies.

Kidney sections were stained with hematoxylin and eosin (H & E) and periodic acid–Schiff (PAS) stains (Figure 2a–c). H & E section of the kidney in the NC group (a) showed normal histological structures of the glomeruli, renal tubules and interstitium, whereas in DC group (b), collapsed/reduced glomeruli tuft and increased Bowman’s space with an area of sclerosis were noted, as highlighted by the significant increase in PAS stain (Figure 2b,c). Mild tubular atrophy was also seen. In D + MP group (c), near normal glomeruli and renal tubules were seen, which was comparable to NC group. In D + Met group (d), compared to the NC group, no collapse of the glomerular tuft was seen. Only minimal mesangial matrix deposition/sclerosis was observed, as highlighted by the significant decrease in PAS stain (Figure 2b,c). However, in D + MP + Met group (e), there was restoration to near normal appearance as there was marked improvement noted on the glomerular structures and tubules of the kidney.

2.6. Immunoexpression of Inflammatory Markers in the Kidney

2.7. Immunoexpression of Cleaved Caspase-3 in the Kidney

We purchased Malaysian propolis itama from a local bee keeper in Min House Camp, Kelantan, Malaysia. MP was extracted using 70% ethanol following our previously described protocol [5]. The freeze-dried propolis extract was kept at −20 °C until usage. In our previous investigation, we reported antioxidant activity and α-glucosidase inhibition activity of MP extract, in addition to the presence of large amounts of flavonoid and phenolic compounds [5].

Thirty adult male Sprague Dawley rats weighing 250–300 g were employed for this study. They were obtained from the Animal Research and Service Centre, Universiti Sains Malaysia (USM), Kelantan, Malaysia, and housed in the Department of Physiology animal room. The rats were maintained in 12/12 h light/dark cycle and had ad libitum access to standard pellet diet and drinking water. They were acclimatized for 7 days before the experiment. The current study was approved by the animal ethics committee of USM, with approval number USM/IACUC/2017/(831). The rats were maintained in accordance with the Guidelines for the Care and Use of Laboratory Animals, National Institute of Health.

Diabetes mellitus was induced using a single intraperitoneal injection of STZ (60 mg/kg b.w.). STZ was dissolved in ice-cold saline and administered after an overnight fast. The rats were given ad libitum access to 5% glucose which they drank overnight, post-STZ injection, to prevent hypoglycemia and mortality. Rats with fasting blood glucose ≥ 14 mmol/L, as recorded using a glucometer (URight TD-4279 Blood Glucose Monitoring System, Dusseldorf, Germany) 72 h post-STZ injection, were considered diabetic and employed for the present study.

To assess serum markers of renal function, blood was collected into plain tubes via cardiac puncture and allowed to stand for 2 h before centrifuging at 4000 rpm for 15 min to collect serum. The serum obtained was used for determining creatinine, urea, uric acid, sodium, chloride and potassium levels by using an Architect ci8200 Integrated system (Abbott, IL, USA) [28].

The left kidney was used for histopathological study. Briefly, the kidney was fixed in 10% formalin for 48 h, excised and processed with an automated tissue processor (Leica, Nussloch, Germany), before embedding in blocks of paraffin. Four µm thick sections were used for H & E and PAS staining. Thereafter, the sections were observed under a light microscope (Olympus BX41, Tokyo, Japan for assessment on the presence of glomerulosclerosis and thickening of the medullary collecting ducts at 400× magnification. PAS-stained sections were analyzed using ImageJ software (ImageJ, NIH-Bethesda, MD, USA) for staining intensity.

Kidney homogenate malondialdehyde level was measured using a previously described method, with tetra ethoxy propane as standard [35], while total antioxidant capacity was measured using a method that is based on reduction in thiobarbituric acid reactive substance formation [36].

Malaysian propolis attenuated renal oxidative stress and inflammation in diabetic rats in the present study. We hypothesize that these beneficial effects are responsible for the improved renal function as shown by decreases in serum creatinine, urea and uric acid levels in the treated diabetic rats, besides the glucose-lowering effect. Additionally, we found that its beneficial effects were potentiated by metformin, thus making MP a potential complementary therapy in DN. The more potent effect of the complementary therapy over the monotherapies may be associated with the rich polyphenol content of MP, since polyphenols are known to show a myriad of biological activities.

This study was approved by the Animal Ethics Committee of Universiti Sains Malaysia, with approval number: USM/IACUC/2017/(831). The rats were maintained in accordance with the Guidelines for the Care and Use of Laboratory Animals, National Institute of Health.

The datasets for this manuscript can be obtained from the corresponding author upon reasonable request.

Samples of the product are available from the authors. 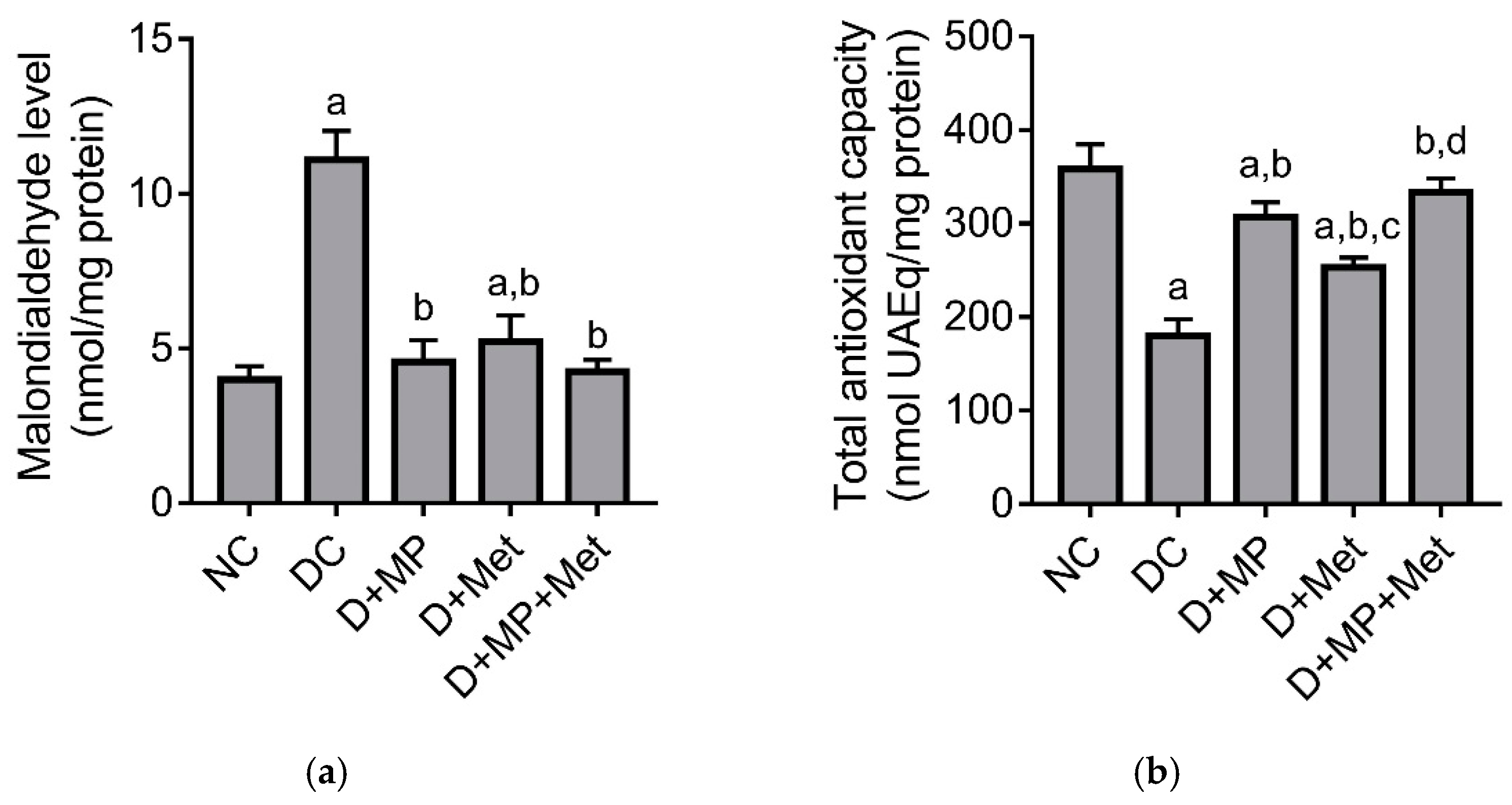 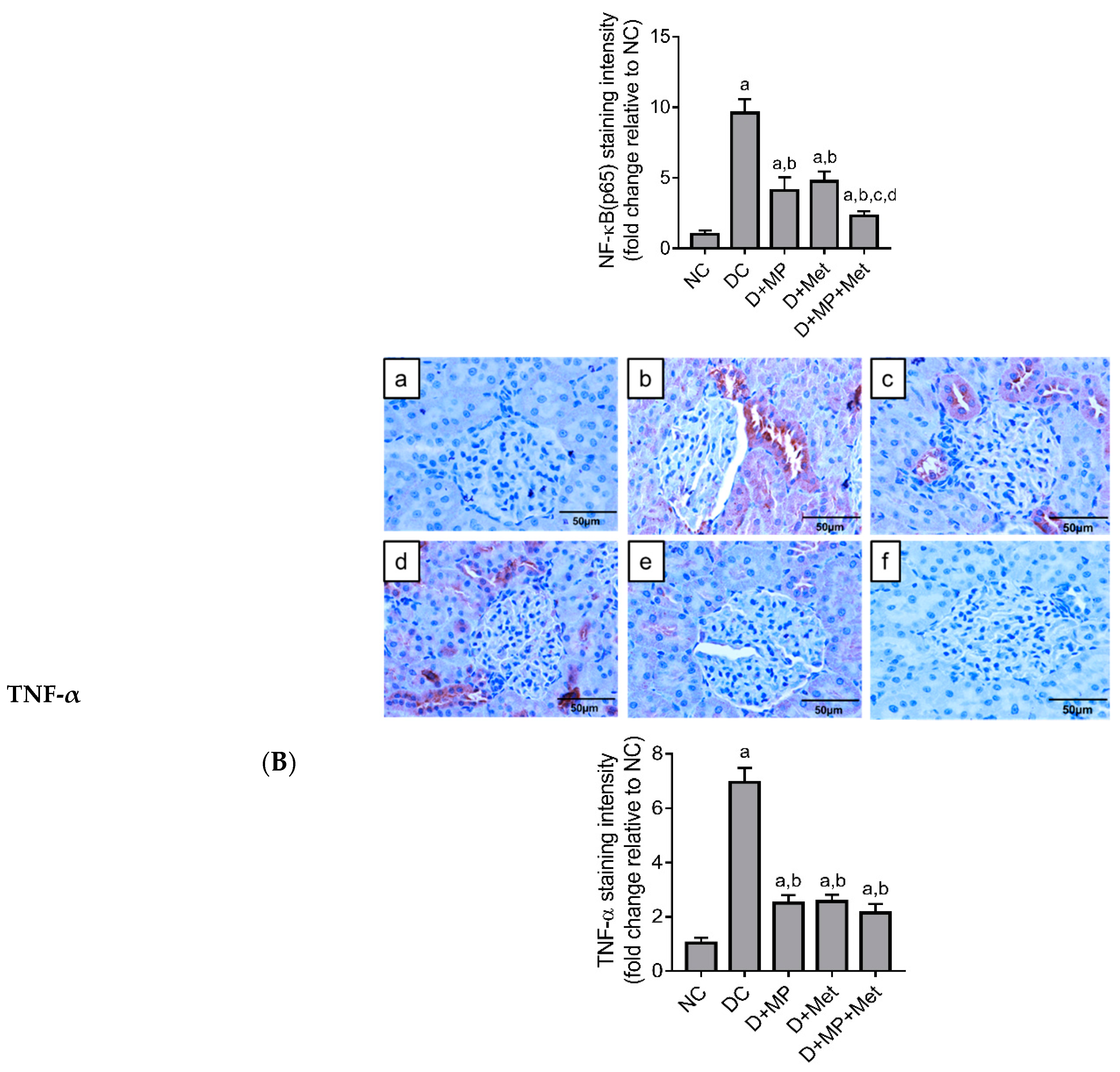