The Chemical Compositions, and Antibacterial and Antioxidant Activities of Four Types of Citrus Essential Oils
Previous Article in Special Issue

Characterizing the Volatile and Sensory Profiles, and Sugar Content of Beeswax, Beebread, Bee Pollen, and Honey

Bee products are a well-known remedy against numerous diseases. However, from the consumers’ perspective, it is essential to define factors that can affect their sensory acceptance. This investigation aimed to evaluate the volatile and sensory profiles, and sugar composition of beeswax, beebread, pollen, and honey. According to the HS-SPME/GC-MS results, 20 volatiles were identified in beeswax and honey, then 32 in beebread, and 33 in pollen. Alkanes were found to dominate in beeswax, beebread, and pollen, while aldehydes and monoterpenes in honey. In the case of sugars, a higher content of fructose was determined in beebread, bee pollen, and honey, whereas the highest content of glucose was assayed in beeswax. In the QDA, the highest aroma intensity characterized as honey-like and sweet was found in honey, while the acid aroma was typical of beebread. Other odor descriptors, including waxy, pungent, and plant-based aromas were noted only in beeswax, honey, and pollen, respectively. View Full-Text
Keywords: aroma composition; bee products; PLS; sugar content; QDA profile aroma composition; bee products; PLS; sugar content; QDA profile
►▼ Show Figures 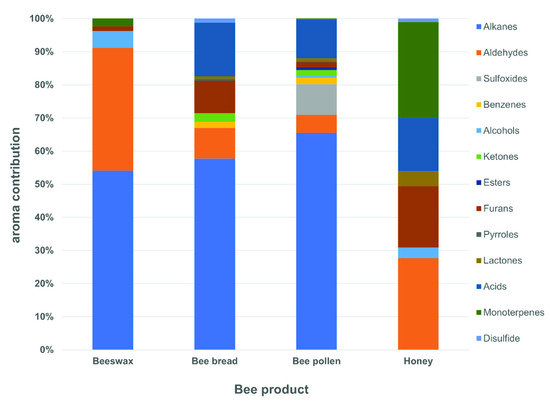