Accurate collection of extracted material represents a technical problem in supercritical fluid extraction because trapping should be performed in severe conditions of rapidly moving and freezing expanded fluid. We have developed a simple device for effective sample collection in analytical-scale supercritical fluid extraction. The device consists of a cyclone separator equipped with a spray trap and a heated check valve. The cyclone separator and spray trap are manufactured from a light polymer via 3D printing and are quick-detachable, which encourages its use in applications where mass yield measurements are required. The device was compared to a standard tubing-and-vial approach in the task of building kinetic curves for the extraction from two aroma plants, namely, laurel and rosemary. The new device showed almost two-fold increase in extraction trapping, most probably due to better collection of volatile compounds. A curious effect of the number of mass measurement points per curve on apparent yield was observed. An increase in the number of points led to an increase in yield, probably due to the effect of the static–dynamic extract regime posed by the manner in which the device is used. View Full-Text
Keywords: supercritical fluid extraction; kinetic curve; collection accuracy supercritical fluid extraction; kinetic curve; collection accuracy
►▼ Show Figures 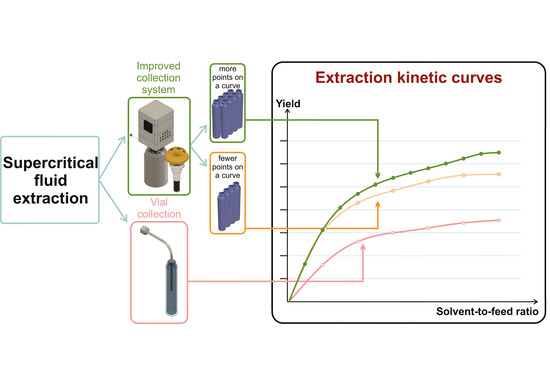