Indian mustard or Brassica juncea (B. juncea) is an oilseed plant used in many types of food (as mustard or IV range salad). It also has non-food uses (e.g., as green manure), and is a good model for phytoremediation of metals and pesticides. In recent years, it gained special attention due to its biological compounds and potential beneficial effects on human health. In this study, different tissues, namely leaves, stems, roots, and flowers of three accessions of B. juncea: ISCI 99 (Sample A), ISCI Top (Sample B), and “Broad-leaf” (Sample C) were analyzed by HPLC-PDA/ESI-MS/MS. Most polyphenols identified were bound to sugars and phenolic acids. Among the three cultivars, Sample A flowers turned were the richest ones, and the most abundant bioactive identified was represented by Isorhamnetin 3,7-diglucoside (683.62 µg/100 mg dry weight (DW) in Sample A, 433.65 µg/100 mg DW in Sample B, and 644.43 µg/100 mg DW in Sample C). In addition, the most complex samples, viz. leaves were analyzed by GC-FID/MS. The major volatile constituents of B. juncea L. leaves extract in the three cultivars were benzenepropanenitrile (34.94% in Sample B, 8.16% in Sample A, 6.24% in Sample C), followed by benzofuranone (8.54% in Sample A, 6.32% in Sample C, 3.64% in Sample B), and phytone (3.77% in Sample B, 2.85% in Sample A, 1.01% in Sample C). The overall evaluation of different tissues from three B. juncea accessions, through chemical analysis of the volatile and non-volatile compounds, can be advantageously taken into consideration for future use as dietary supplements and nutraceuticals in food matrices. View Full-Text
Keywords: Brassica juncea spp.; metabolites; foods; volatile; non-volatile; nutraceuticals; HPLC; GC Brassica juncea spp.; metabolites; foods; volatile; non-volatile; nutraceuticals; HPLC; GC
►▼ Show Figures 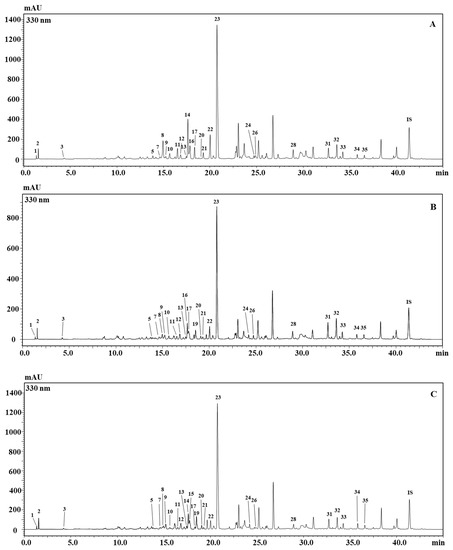