Mahonia aquifolium and its secondary metabolites have been shown to have anticancer potential. We performed MTT, scratch, and colony formation assays; analyzed cell cycle phase distribution and doxorubicin uptake and retention with flow cytometry; and detected alterations in the expression of genes involved in the formation of cell–cell interactions and migration using quantitative real-time PCR following treatment of lung adenocarcinoma cells with doxorubicin, M. aquifolium extracts, or their combination. MTT assay results suggested strong synergistic effects of the combined treatments, and their application led to an increase in cell numbers in the subG1 phase of the cell cycle. Both extracts were shown to prolong doxorubicin retention time in cancer cells, while the application of doxorubicin/extract combination led to a decrease in MMP9 expression. Furthermore, cells treated with doxorubicin/extract combinations were shown to have lower migratory and colony formation potentials than untreated cells or cells treated with doxorubicin alone. The obtained results suggest that nontoxic M. aquifolium extracts can enhance the activity of doxorubicin, thus potentially allowing the application of lower doxorubicin doses in vivo, which may decrease its toxic effects in normal tissues. View Full-Text
Keywords: doxorubicin; Mahonia aquifolium; matrix metalloproteinases; cytotoxicity; human lung adenocarcinoma doxorubicin; Mahonia aquifolium; matrix metalloproteinases; cytotoxicity; human lung adenocarcinoma
►▼ Show Figures 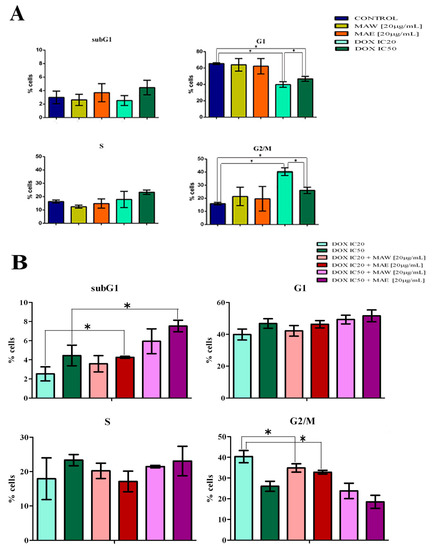