Accumulation of misfolded and mistrafficked rhodopsin on the endoplasmic reticulum of photoreceptor cells has a pivotal role in the pathogenesis of retinitis pigmentosa and a subset of Leber’s congenital amaurosis. One potential strategy to reduce rhodopsin misfolding and aggregation in these conditions is to use opsin-binding compounds as chemical chaperones for opsin. Such molecules have previously shown the ability to aid rhodopsin folding and proper trafficking to the outer cell membranes of photoreceptors. As means to identify novel chemical chaperones for rhodopsin, a structure-based virtual screening of commercially available drug-like compounds (300,000) was performed on the main binding site of the visual pigment chromophore, the 11-cis-retinal. The best 24 virtual hits were examined for their ability to compete for the chromophore-binding site of opsin. Among these, four small molecules demonstrated the ability to reduce the rate constant for the formation of the 9-cis-retinal-rhodopsin complex, while five molecules surprisingly enhanced the formation of this complex. Compound 7, 13, 20 and 23 showed a weak but detectable increase in the trafficking of the P23H mutant, widely used as a model for both retinitis pigmentosa and Leber’s congenital amaurosis, from the ER to the cell membrane. The compounds did not show any relevant cytotoxicity in two different human cell lines, with the only exception of 13. Based on the structures of these active compounds, a series of in silico studies gave important insights on the potential structural features required for a molecule to act either as chemical chaperone or as stabiliser of the 11-cis-retinal-rhodopsin complex. Thus, this study revealed a series of small molecules that represent a solid foundation for the future development of novel therapeutics against these severe inherited blinding diseases. View Full-Text
Keywords: molecular modelling; structure-based virtual screening; molecular dynamics; rhodopsin; small-molecules; severe inherited eye diseases molecular modelling; structure-based virtual screening; molecular dynamics; rhodopsin; small-molecules; severe inherited eye diseases
►▼ Show Figures 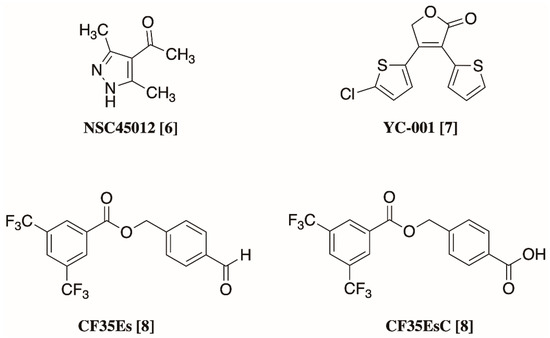