Scientists have demonstrated the potential of plant materials as ‘green’ reducing and stabilizing agents for the synthesis of gold nanoparticles (AuNPs) and opened new ecofriendly horizons to develop effective and less harmful treatment strategies. The current study demonstrated the use of Terminalia mantaly (TM) extracts to synthesize AuNPs with enhanced cytotoxic effects. The TM-AuNPs were synthesized at 25 and 70 °C using water (WTM) and methanolic (MTM) extracts of the leaf, root and stem/bark parts of the plant. The TM-AuNPs were characterized using UV–visible spectrophotometry, dynamic light scattering (DLS), transmission electron microscopy, energy dispersive X-ray (EDX), selection area electron diffraction (SAED) and Fourier transform infrared (FTIR) spectroscopy. Majority of the TM-AuNPs were spherical with a mean diameter between 22.5 and 43 nm and were also crystalline in nature. The cytotoxic effects of TM-AuNPs were investigated in cancer (Caco-2, MCF-7 and HepG2) and non-cancer (KMST-6) cell lines using the MTT assay. While the plant extracts showed some cytotoxicity towards the cancer cells, some of the TM-AuNPs were even more toxic to the cells. The IC50 values (concentrations of the AuNPs that inhibited 50% cell growth) as low as 0.18 µg/mL were found for TM-AuNPs synthesized using the root extract of the plant. Moreover, some of the TM-AuNPs demonstrated selective toxicity towards specific cancer cell types. The study demonstrates the potential of TM extracts to produce AuNPs and describe the optimal conditions for AuNPs using TM extracts. The toxicity of some the TM-AuNPs can possibly be explored in the future as an antitumor treatment. View Full-Text
Keywords: antitumor; gold nanoparticles; green synthesis; nanotechnology; Terminalia mantaly antitumor; gold nanoparticles; green synthesis; nanotechnology; Terminalia mantaly
►▼ Show Figures 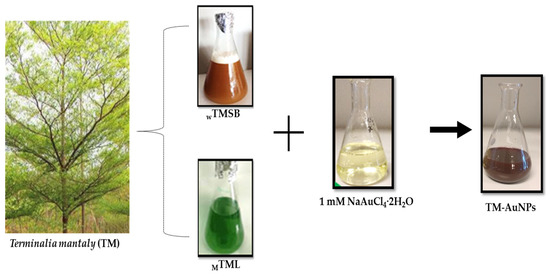