:
The effectiveness of carbon nanotubes (CNT) deagglomeration by rapid expansion of supercritical suspensions (RESS) in nitrogen and carbon dioxide fluids was studied in this work. Two different mechanisms of deagglomeration were proposed for these two fluids at various temperature and pressure conditions. Ultrasound attenuation spectroscopy was applied as an express method of determining median diameter and aspect ratio of CNTs. At least twofold reduction of the diameter was shown for CNT bundles processed by RESS technique. Aspect ratio of processed CNTs, calculated from acoustic attenuation spectra, increased to 340. These results were in a good agreement with atomic force microscopy data.
Keywords:
RESS; supercritical fluids; carbon nanotubes; ultrasound

Uniqueness of physical properties of carbon nanotubes (CNTs) basically define by their thermodynamics state, namely, the most CNT applications in microelectronics [1], polymer nanocomposites [2,3], displays [4], solar panels [5], membranes [6], and many others [7,8], require stable homogeneous CNT dispersions without agglomerates or bundles. Unfortunately, CNTs, like all nano-sized objects, tend to aggregate. CNTs are poorly dispersible in most solvents: They form large aggregates and the stability of nanotube suspensions is usually low. The high hydrophobicity of the nanotube surface is also an important factor increasing their aggregation in water suspensions.
The methods of preparation of stable homogeneous CNT dispersions most frequently involve surfactants and ultrasonic treatment [9]. They often require continuous powerful sonication. Despite the high effectiveness of CNT deagglomeration, this method has a significant disadvantage: Such treatment can make CNTs much shorter, which leads to undesirable changes in the properties of the final product containing CNTs [10,11,12]. Besides, it may also result in more structural defects in the CNTs [13,14].
An alternative and “gentler” technique for processing CNTs can be the RESS (Rapid Expansion of Supercritical Suspensions) method. It is a modification of the more widely known method of Rapid Expansion of Supercritical Solutions, used for micronizing substances soluble in a certain supercritical fluid [15,16,17]. The Rapid Expansion of Supercritical Suspensions (RESS) method consists in the following: A suspension of the starting powdered material in a supercritical fluid (SCF) is produced in a suspension chamber at the preset parameters of state. After storing the suspension for the required amount of time at elevated pressure, it is rapidly sprayed into the precipitation chamber at atmospheric pressure. After the spraying, the fluid rapidly expands behind the nozzle and undergoes a transition from supercritical to gas phase, becomes less dense, and loses its dissolving capacity. The microstructure of the dispersed material changes, mainly due to the rapid and non-uniform pressure drop. The main operating parameters influencing the effectiveness of nanomaterial deagglomeration are the type and composition of the supercritical fluid, its pressure and temperature in the dispersion chamber, and processing time. Depending on the application purpose, an SCF-suspension can be sprayed into a gas to obtain a dry powder (the “dry” method) or into a solvent medium to form a CNT dispersion (the “wet” method) [18]. In the latter case, it is possible to add surfactants to the liquid medium for achieving additional stabilization of CNTs in the suspension. The suspension in this case is usually sprayed through a tube, immersed into the liquid from the bottom of the precipitation vessel, rather than through a nozzle mounted on top of the precipitation vessel or through a ball valve between the dispersion chamber and the precipitation vessel.
In this work, we have studied the characteristics of aqueous dispersions of two CNT types: Starting CNTs and CNTs modified by the method of Rapid Expansion of Supercritical Suspensions, RESS [19,20].

In the experiments, we used two CNT types: Starting single-wall TUBALL CNTs manufactured by OCSiAl (Novosibirsk, Russia) (CNTs-T) and CNTs modified by the Rapid Expansion of Supercritical Suspensions (RESS) method (CNTs-M). Sodium dodecylbenzenesulfonate (SDBS) was purchased by Sigma Aldrich (Steinheim, Germany) (technical grade).
The scheme of the RESS installation is shown in Figure 1. In this work, the RESS processing was carried out by the dry method. The pressure in the 500 ml precipitation vessel was atmospheric. Nitrogen and carbon dioxide were used as the fluids. The following parameters of state were applied: Pressure from 50 to 150 bar, temperature from 40 to 80 ℃ for the nitrogen, pressure from 100 to 300 bar, temperature from 40 to 100 ℃ for the carbon dioxide. The volume of suspension chamber 3 was 25 mL.
Two types of liquid dispersions were prepared based on two types of CNTs (starting CNTs and nitrogen-modified ones). The starting CNTs were diluted with deionized water with an addition of a sodium dodecylbenzenesulfonate (SDBS) dispersant for steric stabilization of the nano-objects during the dispersion preparation procedure. To remove large agglomerates of nano-objects from the dispersions, we subjected the latter to intensive ultrasonic dispersing with an acoustic power of 100 W for 60 min and to accelerated sedimentation in a 5000 g centrifugal field for 60 min in a high-speed Sigma 3-30K centrifuge (Sigma Laborzentrifugen GmbH, Osterode am Harz, Germany) and then extracted the supernatant in an amount of 4/5 of the dispersion volume [21].
The final dispersion sample contained a smaller amount of carbon nanotubes than the starting mixture of water, a surfactant, and CNTs, since part of the solid phase precipitated after the accelerated sedimentation procedure. To determine the final concentration of the samples, we measured the coefficient of electromagnetic radiation absorption by the suspension at a wavelength of 260 nm with a Jasco V-770 spectrophotometer. The measurement results showed that the concentration of CNTs-T and CNTs-M in the dispersions was approximately the same (the concentration of CNTs-T was 3% lower than that of CNTs-M) and amounted to about 1.4 g/L.
The obtained dispersions were stable enough to be used in the study.
The following methods were applied for characterizing CNT dispersion samples: Transmission electron microscopy (TEM) on a JEM-2100 instrument at an accelerating voltage of 200 kV, scanning electron microscopy (SEM) on a JSM-7001F apparatus at an accelerating voltage of 30 kV, atomic force microscopy (AFM) in a semi-contact mode on an Ntegra Prima instrument, and acoustic spectroscopy (AS) on a DT-500 apparatus in the frequency range of 1–100 MHz.The samples for the microscopy studies were prepared by diluting the starting dispersions by about 1000 times and depositing them onto carbon networks for the TEM and onto atomically smooth substrates made of mono-crystal silicon steel for the SEM and AFM measurements.
The CNTs were also characterized by the Raman spectroscopy method with a Horiba LabRAM HR Evolution confocal Raman microscope with He-Ne laser excitation (λ = 632.8 nm).

The conclusion of this work is that the RESS process is effective method of CNTs dispersing. Modification of the starting carbon nanotubes by the supercritical fluid technology method (the RESS method) makes it possible to obtain a stable dispersion of carbon nanotubes with a nanotube bundle diameter of about 7.2 nm in the dispersion, which may be significant for nanotube dispersion applications. Such conclusion is confirmed with different physico-chemical methods.

Conceptualization, O.O.P.; investigation, K.B.U., A.A.L. and N.I.S.; writing—review and editing, A.M.V.; methodology, M.G.K. and Y.M.T.; data curation V.V.I. All authors have read and agreed to the published version of the manuscript.

This work was financially supported by the Russian Foundation for Basic Research, grant 18-29-06071. 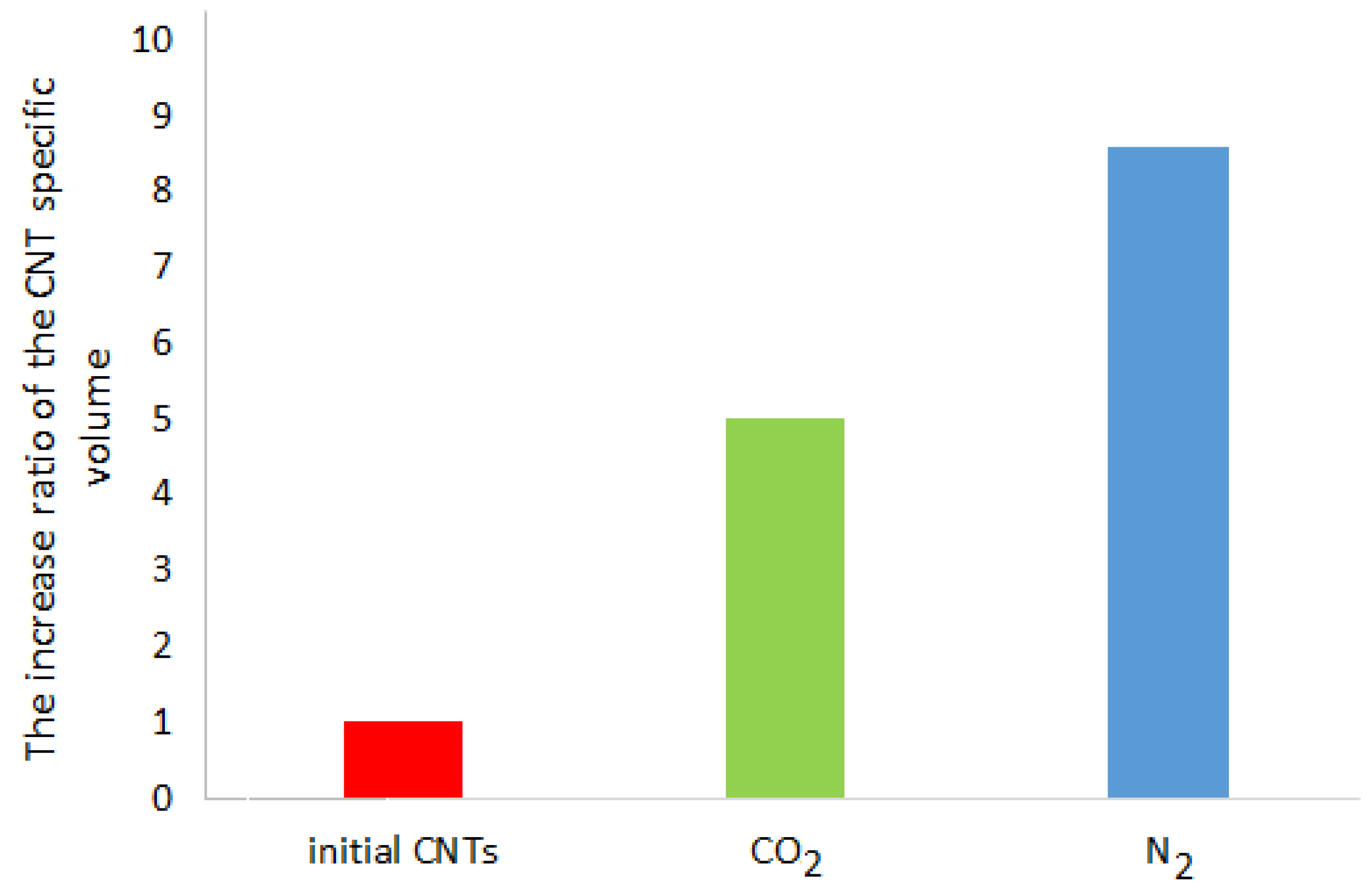 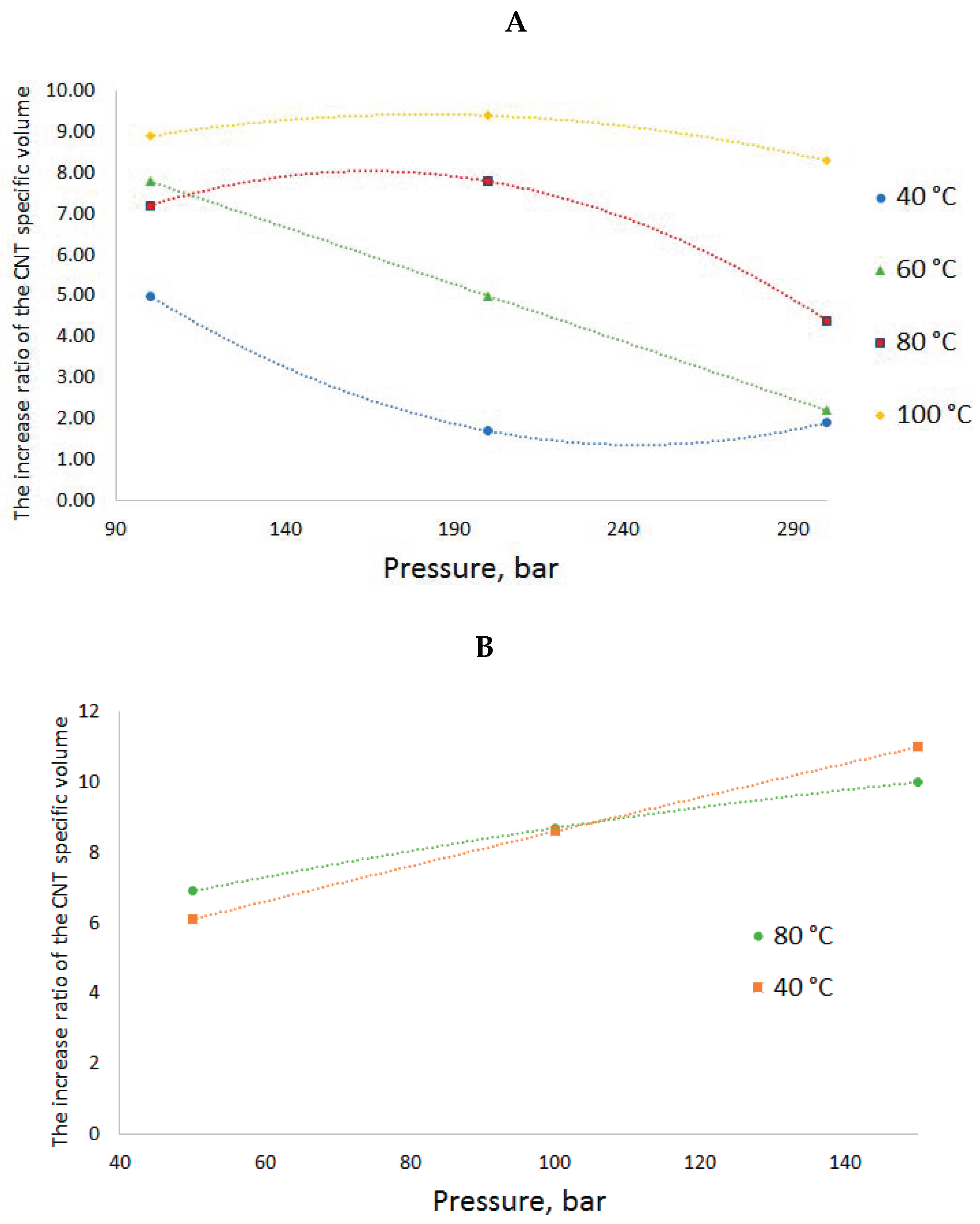