Modified Enzyme Substrates for the Detection of Bacteria: A Review

Platinum is a precious metal with many applications, such as: catalytic converters, laboratory equipment, electrical contacts and electrodes, digital thermometers, dentistry, and jewellery. Due to its broad usage, it is essential to recover it from waste solutions resulted out of different technological processes in which it is used. Over the years, several recovery techniques were developed, adsorption being one of the simplest, effective and economical method used for platinum recovery. In the present paper a new adsorbent material (XAD7-DB30C10) for Pt (IV) recovery was used. Produced adsorbent material was characterized by X-ray dispersion (EDX), scanning electron microscopy (SEM) analysis, Fourier Transform Infrared Spectroscopy and Brunauer-Emmett-Teller (BET) surface area analysis. Adsorption isotherms, kinetic models, thermodynamic parameters and adsorption mechanism are presented in this paper. Experimental data were fitted using three non-linear adsorption isotherms: Langmuir, Freundlich and Sips, being better fitted by Sips adsorption isotherm. Obtained kinetic data were correlated well with the pseudo-second-order kinetic model, indicating that the chemical sorption was the rate-limiting step. Thermodynamic parameters (ΔG°, ΔH°, ΔS°) showed that the adsorption process was endothermic and spontaneous. After adsorption, metallic platinum was recovered from the exhausted adsorbent material by thermal treatment. Adsorption process optimisation by design of experiments was also performed, using as input obtained experimental data, and taking into account that initial platinum concentration and contact time have a significant effect on the adsorption capacity. From the optimisation process, it has been found that the maximum adsorption capacity is obtained at the maximum variation domains of the factors. By optimizing the process, a maximum adsorption capacity of 15.03 mg g−1 was achieved at a contact time of 190 min, initial concentration of 141.06 mg L−1 and the temperature of 45 °C. View Full-Text
Keywords: platinum (IV); recovery; dibenzo-30-crown-10; Amberlite XAD7 resin; adsorption; factorial design platinum (IV); recovery; dibenzo-30-crown-10; Amberlite XAD7 resin; adsorption; factorial design
►▼ Show Figures 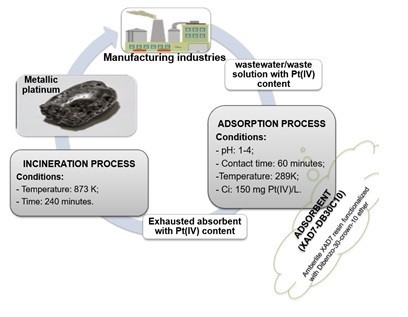