Article
Fe-Loaded MOF-545(Fe): Peroxidase-Like Activity for Dye Degradation Dyes and High Adsorption for the Removal of Dyes from Wastewater
by

In recent years, dyes have been widely used to color the products in many industries, such as dyestuffs, paper, leather, plastic, rubber, and cosmetics [1]. Some of the commercial dyes are discharged into the environment directly, causing environmental pollution [2]. Every year, more than 100,000 tons of commercial dyes are consumed in the textile industry, and approximately 100 tons are discarded directly into the water stream [3,4,5,6]. Since most of the dyes are highly toxic, synthetic sources with complex chemical structure, they are stable and biodegradation by the environment is a difficult process [7]. However, colored water with high dyes adsorption gives a bad impression and is considered to be unhealthy for human consumption. Thus, removing dyes from the industrial waste is an important scientific challenge. At present, various methods, such as adsorption, coagulation, advanced oxidation, and membrane separation, are used to eliminate the dye contamination from the industrial waste [8,9,10,11]. Among various techniques, adsorption is considered to be a promising method because of its simplicity and efficiency [5]. Several adsorbents, such as activated carbons, clay materials, and multifunctional nanoparticles are used to remove dyes to purify polluted water [10,11,12,13]. However, most of the mentioned absorbents have pore diameter of less than 2 nm, thereby limiting the capture of bulky dye molecules to the inner surface of the pore. Therefore, a new adsorbent to remove accessible bulky dyes from wastewater is required. Although physical methods of removing dyes from wastewater are helpful, biological methods, which involve catalyzing and degrading the dye molecules via enzymatic properties, have an advantage regarding environmental protection including low sludge and no toxic production. Horseradish peroxidase (HRP) is one of the most common natural enzymes used to eliminate phenols from water solutions, but treatment of large volumes of wastewaters using HRP is difficult due to the high cost [14]. Compared with the limitations of the natural enzyme [13], this specific enzyme (or contain the enzymatic properties) has the stable chemical properties and catalytic abilities, making it possibly suitable to remove dyes from industrial waste. A number of reports described that some natural enzyme activity can be manifested in a new crystalline porous material with a metal-organic frameworks (MOFs).
Metal-organic frameworks (MOFs) are a recent classification of porous material, which are attracting interest due to its applications, such as membrane separation, sensing, catalysis, and proton conduction [15,16,17,18]. The adsorption activity of MOF was affected by the modification of MOF structure. MOF modified by functional group (such as quaternary N-alkyl ammonium salt) and MOF treated by metalation with Cu or Zn all exhibit better adsorption capacities in organic dyes [19,20,21]. Yaghi et al. synthesized a zirconium–metalloporphyrin meso MOF, named MOF-545 [22]. Zhou et al. also reported a similar structure and named it PCN-222, independently [23]. Zr-based MOF-545 was composed of Zr6 clusters and TCPPs (tetrakis(4-carboxyphenyl)porphyrin) that supported an open channel with a large diameter (3.7 nm). The metal iron (Mn, Fe, Co, Ni, Cu, Zn, Pd) could be immobilized by a porphyrin frame depending on the application. Because of the large pore size and Zeta potentials for Zr-based MOF-545, our laboratory clarified that it possessed the high absorption ability for dyes in aqueous solutions. Specifically, the adsorption capacity with the same dye enhancement was observed from our precious work [24].
From the published results, peroxidases were discovered to be enzymes that catalyzed the degradation of dyes alongside H2O2 [25]. During the catalytic oxidization for industrial dyes, the peroxidases were extremely stable, while also being cost-effective and with short treatments [26]. Moreover, peroxidases catalyze a wide range of aromatic substrates which open the complex aromatic rings to degrade heterocyclic structures. MOF-based catalysts for photo-degradation of organic dyes have already been published in several reports. Many sorts of MOF complexes exhibited the excellent photocatalytic capability for methyl orange (MO) and methylene blue (MB). The addition of H2O2, acting as the second ligand, onto the complex enhanced the photo-degradation of organic dyes [27,28]. With the Fe metalized into MOF-545, the Fe-loaded MOF-545(Fe) can catalyze the substrates with its peroxidase-like activity, which avoids the utilization of the complicated photocatalytic systems. The Fe-loaded MOF-545(Fe) was acting as an effective peroxidase mimic with a substrate binding affinity (Km) and a catalytic activity (kcat) superior to heme in aqueous media. The integration of high-density catalytic centers, ultra-large open channels, and the extraordinary chemical stability of Fe-loaded MOF-545(Fe) suggests a bright future regarding building MOF-based platforms for enzyme-mimicking catalysis [23].
The study of Fe-loaded MOF-545(Fe) clarified that a variety of substrates were catalyzed by Fe-loaded MOF-545(Fe) with excellent binding affinity and catalytic activity [23]. To understanding the character of Fe-loaded MOF-545(Fe) precisely, in this work, the POD-like activity of Fe-loaded MOF-545(Fe) was observed. The Fe-loaded MOF-545(Fe) was characterized using UV-Vis absorption spectra, X-ray diffraction (XRD), scanning electron microscopy (SEM), nitrogen adsorption and, Zeta potential analysis. To clarify the enzymatic properties of Fe-loaded MOF-545(Fe), the classical peroxidase substrate 3,3,5,5-tetra-methyl-benzidine (TMB) was studied in our work. From the published results, the anionic dye MO and cationic dye MB both are widely found in textile wastewater [29,30]. Since the Fe-loaded MOF-545(Fe) was confirmed to exhibit the peroxidase efficacy, the catalytic properties of Fe-loaded MOF-545(Fe) were observed via degradation using methylene blue (MB) and methyl orange (MO). Our results showed that Fe-loaded MOF-545(Fe) was stable and sensitively reactive with substrate, thereby presenting an advantage as a new method in processing wastewater.

The N2 adsorption/desorption isotherms of Fe-loaded MOF-545(Fe) and Zr-based MOF-545 were measured to investigate the Barrett–Joyner–Halenda (BJH) pore diameter and the Brunauer–Emmett–Teller (BET) surface area (Figure 2C). The samples exhibited H1-type narrow hysteresis loops, which were classified by the International Union of Pure and Applied Chemistry (IUPAC) [35]. The BJH pore diameter of Fe-loaded MOF-545(Fe) were 1.3 nm and 3.1 nm with BET surface area at 2368 m2·g−1. The Fe-loaded MOF-545(Fe) showed a slight change in pore size comparing with Zr-based MOF-545. The results were consistent with the XRD described in Figure 2A. Most of the pore size was larger than that of MO and MB (~2 nm), thereby giving an advantage regarding the removal of the dyes [36].

2.3. The Adsorption of Acid/Basic Dyes

The phase structure of the as-synthesized products was identified using a scanning electron microscope (JEOL JEM-6700F) operating at a voltage of 5 kV. X-ray diffraction (XRD, Empyrean) was carried out using Cu–Ka radiation (α = 1.5418 A°) over a 2θ range of 1–25° at a rate of 1°/min with Empyrean (PANalytical B.V., Netherlands). UV-Vis absorption spectra (UV-2700 Shimadzu, Japan) measurements of each MOF were quantitatively metalized. FTIR experiments were measured using an FTIR instrument (Bruker, Germany) with a scan wavenumber range from 2000 to 400 cm−1, overlapping 30 times. The surface and porous properties were performed using the ASAP 2020 Accelerated Surface Area and Porosimetry System from Micromeritics (Norcross, GA, USA) at 77 K. The MOF was added to the DMF solution containing 2 M hydrochloric acid at 120 °C for 2 h to remove residual inorganic salt ions and organic molecules before testing [22,45].

The peroxidase-like catalytic activity of Fe-loaded MOF-545(Fe) was determined by the catalytic oxidation of the peroxidase substrate TMB in the presence of H2O2 by measuring the formation of a blue charge-transfer complex of diamine from TMB at 652 nm (ε = 39000 M−1 cm−1) [46,47]. The catalytic activity experiment, unless otherwise specified, was conducted in acetate buffer (pH 4.0) in the presence of Fe-loaded MOF-545(Fe) (1 mg·L−1) with 0.05 mM of TMB and 0.5 mM of H2O2. The reaction proceeded at 20 °C with time for 5 min.

The catalytic reactions were incubated in different temperature metal baths from 10 °C to 60 °C, under conditions identical to those used for the activity assay [48].

The steady-state kinetics were evaluated by varying one of the concentrations of Fe-loaded MOF-545(Fe), H2O2 (0–1.2 mM), or TMB (0–0.2 mM) at a time. The reaction was carried out in acetate buffer (pH 4.0) for 5 min and monitored by measuring the absorbency at 652 nm. The kinetic curves were adjusted according to the Michaelis–Menten model [47].

3.5. Adsorption of Dyes from Water without H2O2

The effect of pH for Fe-loaded MOF-545(Fe) on absorption for the basic MB dye and acidic MO dye were examined. The concentration of MB and MO was 10 mg·L−1 and the pH was controlled from 2.0 to 9.0 by 0.1 M HCl or 0.1 M NaOH. The 10 mg Fe-loaded MOF-545(Fe) powder was added to 1000 mL of solution without H2O2 and the mixture was stirred with a magnetic stirrer. The mixture was centrifuged at 10,000 rpm for 30 s after adsorption finished. The absorbance of the supernatant was measured for MO and MB at 464 nm and 664 nm, respectively.

3.6. Degradation of Dyes from Water with H2O2

Research of designing, Z.L., C.L. and C.Z.; experimental operation, C.Z.; H.L. conducted the data analyses. Writing the draft and data preparation, C.Z. and C.L. All authors have read and agreed to the published version of the manuscript.

This work was supported by the National Natural Science Foundation of China (grant number: 31670797).

We thank Mingqi Wang, Xu Geng, and Ning Jiang for discussions. We thank MDPI English Editing for editing and proofreading this manuscript. 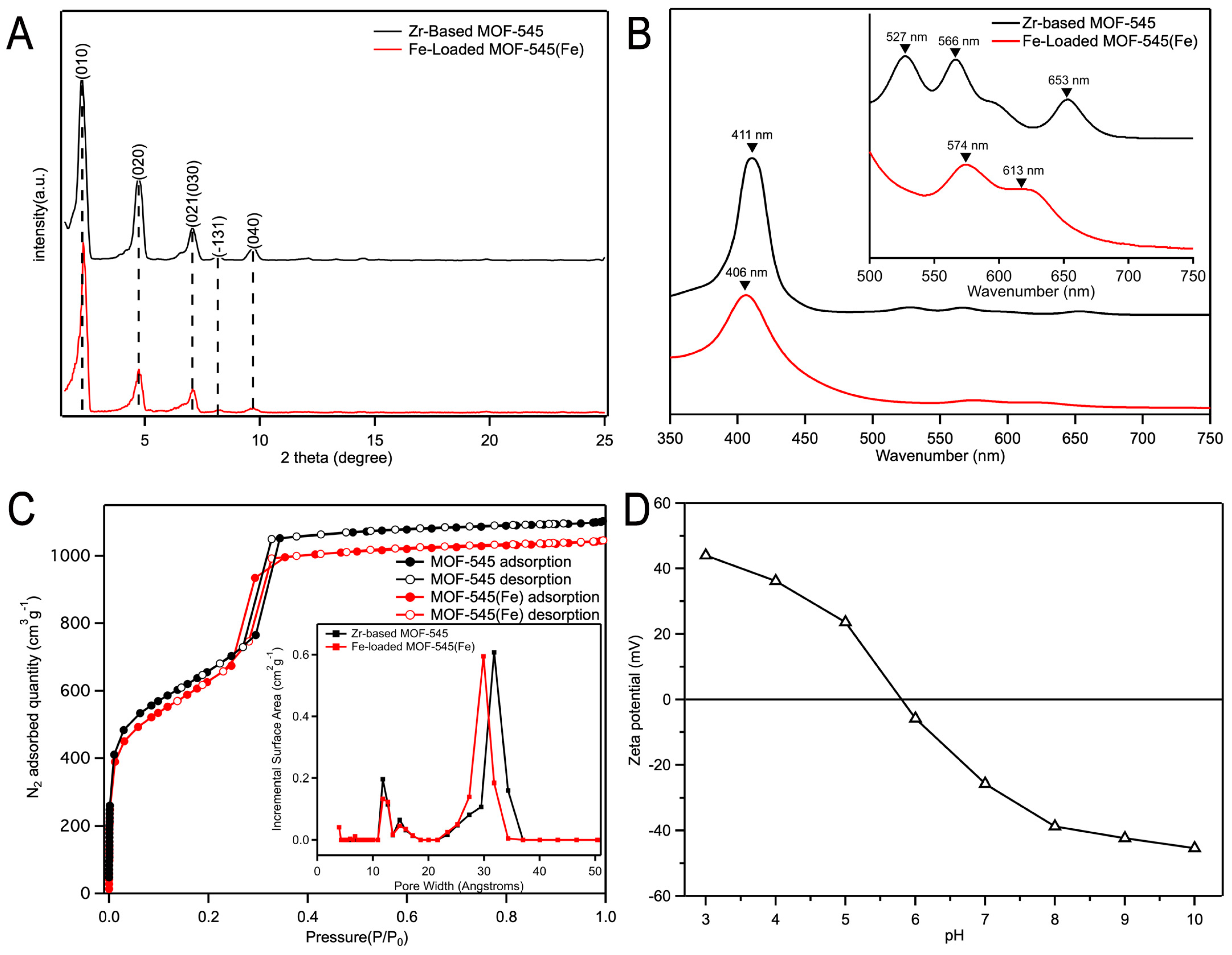