On the Reversible and Irreversible Inhibition of Rhodesain by Curcumin

Neurodegenerative diseases have no treatment currently available, and the principal goals for neurodegeneration care are early diagnosis, physical health, optimizing, identifying and treating abnormal behavioral and psychological symptoms. Glutamate is a neurotransmitter that plays critical roles in various physiological as well as pathological brain functions [1]. Under normal conditions, glutamate is responsible for cell survival, migration, and differentiation during brain development, while an excessive amount of glutamate leads to neuronal cell death through oxidative stress or excitotoxicity [1,2]. Reactive oxygen species (ROS) is one major cause of neuronal cell death in chronic neurodegenerative diseases [3,4]. Earlier studies showed that an excessive release of glutamate in the extracellular region provoked the accumulation of intracellular ROS by depletion of intracellular glutathione levels through blocking cysteine uptake [5]. The presence of an antioxidant, such as flavonoids or N-acetylcysteine, strongly prevented ROS-induced neuronal cell death [6,7].
The use of natural antioxidants for scavenging free radicals and maintaining homeostasis contributes to alleviating neuronal dysfunction [8]. Typically, natural compounds are multiple-target molecules found mainly in microorganisms and plants and exhibit strong antioxidant activity [8,9]. Phenolic compounds from natural sources also exhibit various beneficial effects in cancer, inflammation, and neurodegenerative disorders [9]. This broad spectrum of biological or pharmacological activities has made phytochemicals suitable candidates for treating multifactorial diseases, such as neurodegenerative diseases [10,11]. However, there are also several concerns regarding their poor bioavailability, stability and safety, which must be resolved before effective therapeutics can be developed.
Mitogen-activated protein kinases (MAPKs), known as a family of serine/threonine protein kinases, are well-identified biological molecules involved in glutamate-induced oxidative neuronal cell death. MAPKs are related to multiple cellular functions including differentiation, proliferation, cell survival, inflammation, and cell death [12]. The presence of excessive glutamate triggers ROS, an increase in intracellular calcium ion concentration, and the activation of MAPKs, including phosphorylation of c-Jun N-terminal kinase (JNK), extracellular signal-regulated kinase (ERK), and p38, which are responsible for neuronal cell death in both primary neuronal cultures and neuronal cell lines [13]. Recently, we found that phytochemicals, such as chebulinic acid and casuarinin, markedly prevented ROS, elevation of intracellular calcium level, and phosphorylation of MAPKs by excessive glutamate-induced HT22 cell death [14,15]. Therefore, the inhibition of MAPK phosphorylation is a key mechanism of neuroprotective compounds among the biological molecules involved in glutamate-induced oxidative stress.
Tetrahydrocurcumin (THC) is a major secondary metabolite of curcumin known as a major bioactive compound of Curcuma longa (turmeric) [16]. Curcumin is typically metabolized in the intestine to THC which has strong antioxidant activity [17]. THC is stable at a wide range of pH, and can be easily absorbed through the gastrointestinal tract. Furthermore, THC also plays a critical role in biological effects of curcumin [17]. It has been reported that THC shows anti-inflammatory, anticarcinogenic activities, and neuroprotective effects [18,19]. However, the effect of THC needs to be clarified on glutamate-related neuronal cell death. Therefore, the present study was carried out to demonstrate the possible effect and the protective mechanism of THC on glutamate-mediated neuronal cell death.

Tetrahydrocurcumin (THC) was prepared from curcumin as reported previously [17,18]. In brief, curcumin was isolated from the powder of turmeric, Curcuma longa. The isolated curcumin was then converted to tetrahydrocurcumin (THC) by hydrogenation reaction with 10% PtO2 as the catalyst. After hydrogenation, THC was purified by preparative HPLC, and identified by using NMR and MS spectra.

Each of the concentrations of THC were mixed with an equal volume of DPPH solution (Sigma, St. Louis, MO, USA). After incubation for 30 min at 25 °C, the absorbance value at 540 nm was measured using an E-Max microplate reader.

To assess the cell viability, we used MTT assay kit (EZ-CyTox; Daeil Lab Service, Seoul, Korea). HT22 cells were plated on 96-well plates at a density of 1 × 104 per well and incubated for 24 h to adhere. The cells were then exposed to 5 mM glutamate for 24 h with the indicated concentrations of THC. Cells were then added with 10 µL of Ez-CyTox reagent followed by incubating the cells for 30 min. Absorbance values at 450 nm were obtained using an E-Max microplate reader (Molecular Devices, Sunnyvale, CA, USA). The viability of cells was represented by comparing the percentage of viability of the control group [30].

HT22 cells were plated to 6-well plates and stained with Hoechst 33342 (Sigma) as reported previously [31]. After treatment with glutamate for 12 h, cells were incubated with 10 μM of Hoeschst 33342 for 10 min to verify the chromatin condensation. Fluorescent images with nuclear condensation were obtained using a fluorescent microscope (IX50).

To evaluate the levels of intracellular Ca2+, cells were treated with 5 mM glutamate for 8 h with or without THC. The cells were treated with 2 µM Fluo-4 AM (Invitrogen, Eugene, OR, USA) 30 min before imaging. Fluorescent images were acquired using a fluorescent microscope equipped (IX50; Olympus) and analyzed quantitatively using ImageJ software (National Institute of Health).

The apoptotic cells were measured using a Tali Image-Based Cytometer (Invitrogen) [34]. In brief, cells were harvested after the treatment of 5 mM glutamate for 12 h. The cells were treated with annexin-binding buffer and labeled with AlexaFluor 488-conjugated annexin V for 20 min. The cells were then stained further with propidium iodide. The stained images were obtained and analyzed with TaliPCApp (version 1.0). The percentage of apoptotic cells were exhibited as the annexin V-positive cells compared with the control group.

All data measured from the three individual experiments were analyzed. The data were presented as mean ± S.E.M. Statistical significance was assessed using a Student’s T-test, with p-values less than 0.05 considered statistically significant.

The present study demonstrated that THC strongly prevents HT22 cell death induced by glutamate. Its protective mechanisms occur through the inhibition of the accumulation of intracellular ROS as an antioxidant property, blockage of MAPK activation, and prevention of apoptotic cell death of HT22 cells by glutamate. Therefore, THC may be useful as a potent neuroprotective metabolite of curcumin against glutamate-mediated neuronal death.

This work was supported by the “Cooperative Research Program of Center for Companion Animal Research (Project No. PJ01398403)” Rural Development Administration, Republic of Korea. 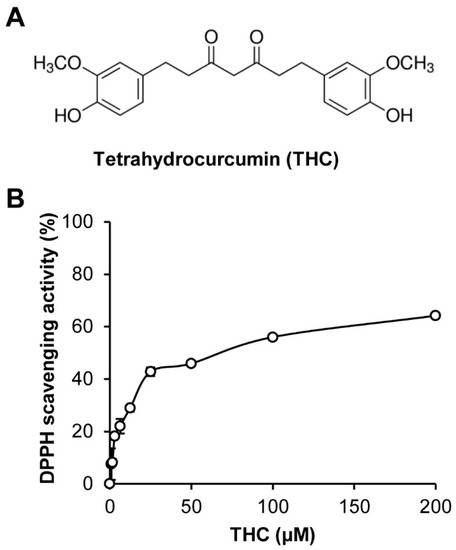 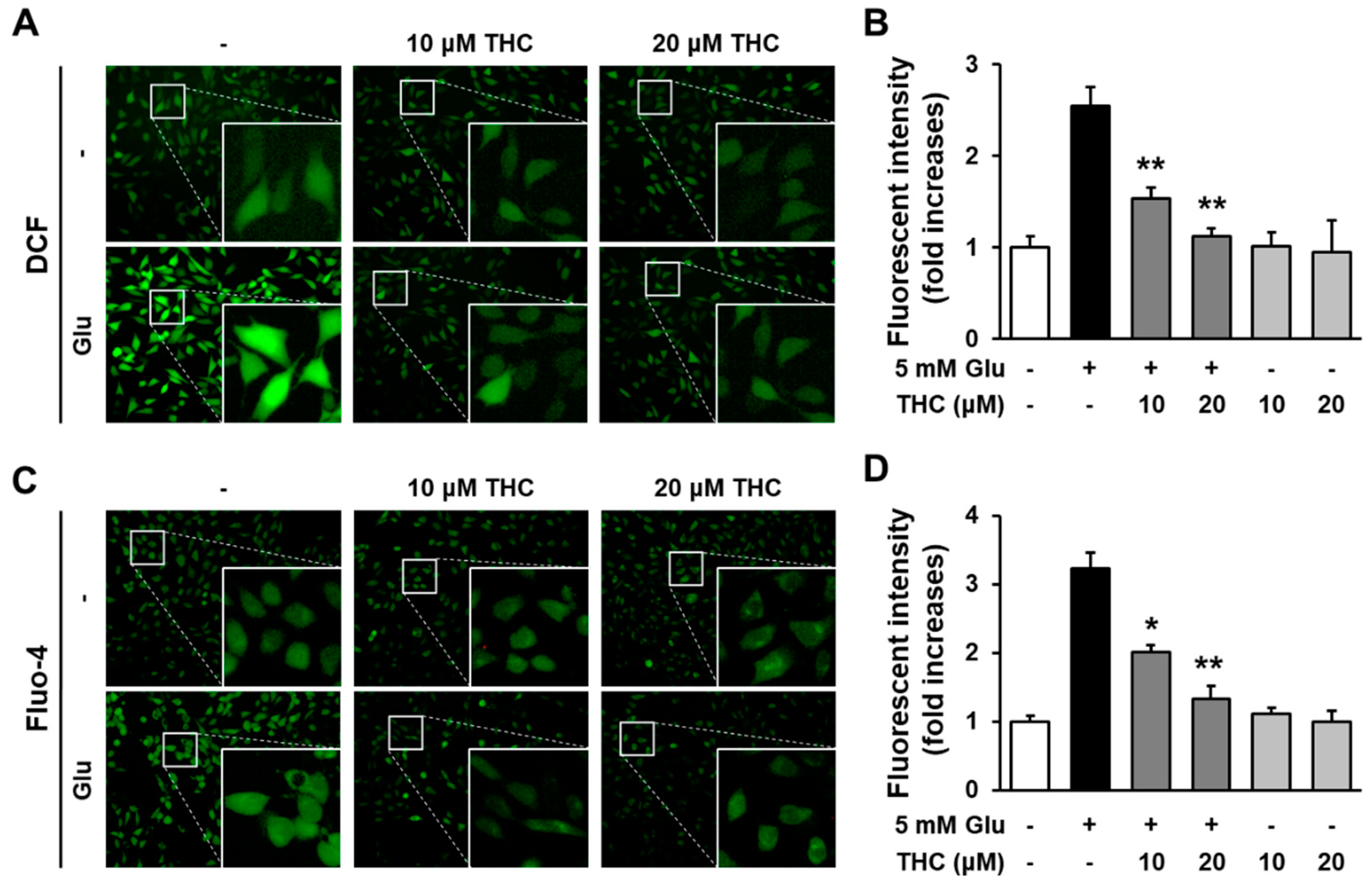 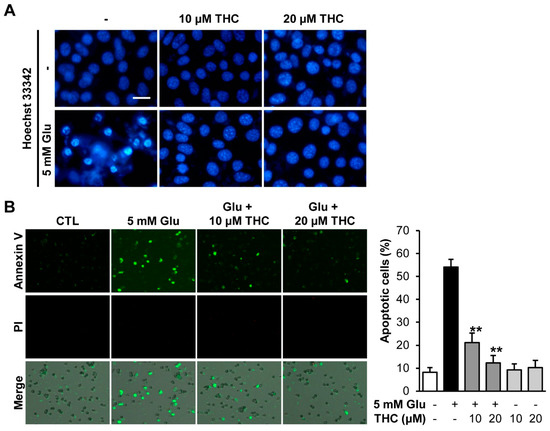