New Green Determination of Cu, Fe, Mn, and Zn in Beetroot Juices along with Their Chemical Fractionation by Solid-Phase Extraction

The content of tobacco-specific nitrosamines (TSNAs) possessing carcinogenic properties has been an important area of research since replacement liquids were introduced for e-cigarettes. A method for determining N′-nitrosonornicotine (NNN), 4-(methylnitrosamino)-1-(3-pyridyl)-1-butanone (NNK), N′-nitrosoanatabine (NAT), and N′-nitrosoanabasine (NAB) in replacement liquids for electronic cigarettes was developed using liquid chromatography–tandem mass spectrometry with electrospray ionisation (HPLC-ESI-MS/MS) in the multiple reaction monitoring mode. The sample preparation of replacement liquids was accomplished via the ultrasound-assisted solvent extraction of a porous membrane packed sample. The sample preparation proved to be successful in extracting the analytes, with recoveries from 87% to 105%, with coefficients of variation < 4.9%. Moreover, the linearity and limits of detection and quantitation (LOD, LOQ), together with repeatability and accuracy, were determined for the developed method. The proposed sample preparation and developed chromatographic method were successfully applied to the determination of TSNAs in 9 replacement liquid samples. The NNK and NNN were found to be most frequently detected (89 and 67%, respectively), with concentration ranges from 1.2–54.3 ng/mL and 4.1–30.2 ng/mL, respectively, while NAT was detected with frequency of 22% with range 1.7–2.5 ng/mL and NAB were found to be below the LOD in all samples. View Full-Text
Keywords: e-cigarettes; replacement liquids; tobacco-specific nitrosamines; porous membrane; liquid chromatography-tandem mass spectrometry e-cigarettes; replacement liquids; tobacco-specific nitrosamines; porous membrane; liquid chromatography-tandem mass spectrometry
►▼ Show Figures 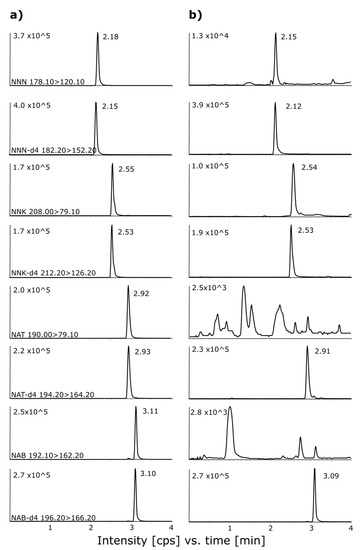 Kubica, P. Ultrasound-Assisted Solvent Extraction of a Porous Membrane Packed Sample for the Determination of Tobacco-Specific Nitrosamines in the Replacement Liquids for E-Cigarettes. Molecules 2019, 24, 4618. https://doi.org/10.3390/molecules24244618


Kubica P. Ultrasound-Assisted Solvent Extraction of a Porous Membrane Packed Sample for the Determination of Tobacco-Specific Nitrosamines in the Replacement Liquids for E-Cigarettes. Molecules. 2019; 24(24):4618. https://doi.org/10.3390/molecules24244618


Kubica, Paweł. 2019. "Ultrasound-Assisted Solvent Extraction of a Porous Membrane Packed Sample for the Determination of Tobacco-Specific Nitrosamines in the Replacement Liquids for E-Cigarettes" Molecules 24, no. 24: 4618. https://doi.org/10.3390/molecules24244618