A New Strategy for Effective Succinic Acid Production by Enterobacter sp. LU1 Using a Medium Based on Crude Glycerol and Whey Permeate
Next Article in Special Issue

The Meta-Position of Phe4 in Leu-Enkephalin Regulates Potency, Selectivity, Functional Activity, and Signaling Bias at the Delta and Mu Opioid Receptors

As tool compounds to study cardiac ischemia, the endogenous δ-opioid receptors (δOR) agonist Leu5-enkephalin and the more metabolically stable synthetic peptide (d-Ala2, d-Leu5)-enkephalin are frequently employed. However, both peptides have similar pharmacological profiles that restrict detailed investigation of the cellular mechanism of the δOR’s protective role during ischemic events. Thus, a need remains for δOR peptides with improved selectivity and unique signaling properties for investigating the specific roles for δOR signaling in cardiac ischemia. To this end, we explored substitution at the Phe4 position of Leu5-enkephalin for its ability to modulate receptor function and selectivity. Peptides were assessed for their affinity to bind to δORs and µ-opioid receptors (µORs) and potency to inhibit cAMP signaling and to recruit β-arrestin 2. Additionally, peptide stability was measured in rat plasma. Substitution of the meta-position of Phe4 of Leu5-enkephalin provided high-affinity ligands with varying levels of selectivity and bias at both the δOR and µOR and improved peptide stability, while substitution with picoline derivatives produced lower-affinity ligands with G protein biases at both receptors. Overall, these favorable substitutions at the meta-position of Phe4 may be combined with other modifications to Leu5-enkephalin to deliver improved agonists with finely tuned potency, selectivity, bias and drug-like properties. View Full-Text
Keywords: Leu-enkephalin; beta-arrestin; mu opioid receptor; delta opioid receptor; biased signaling; DADLE; ischemia; plasma stability Leu-enkephalin; beta-arrestin; mu opioid receptor; delta opioid receptor; biased signaling; DADLE; ischemia; plasma stability
►▼ Show Figures 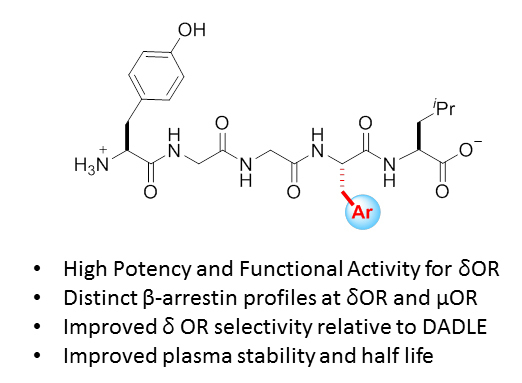