Yeast are able to modulate many sensory parameters of wines during red must fermentation. The effect on color and on the formation of derived pigments during fermentation has been studied thoroughly since the 90s. Yeast can increase grape anthocyanin’s color by acidification by hyperchromic effect (increase of flavylium molecules). Recent studies with non-Saccharomyces species, as Lachancea thermotolerans, described the intense effect of some strains on anthocyanin’s color, and subsequent, stability, by strongly reducing wine’s pH during fermentation. Moreover, selected yeast strains of Saccharomyces have been shown to release metabolites such as pyruvic acid or acetaldehyde that promote the formation of vitisin A and B pyranoanthocyanins during must fermentation. Schizosaccharomyces pombe, because of its specific metabolism, can produce higher concentrations of pyruvate, which enhances the formation of vitisin A-type derivatives. The hydroxycinnamate decarboxylase activity that some Saccharomyces strains express during fermentation also promotes the formation of vinylphenolic derivatives. Some non-Saccharomyces species, such as S. pombe or P. guilliermondii can also improve the production of these derivatives compared to selected strains of Saccharomyces cerevisiae. Lastly, some yeasts are also able to modulate the formations of polymeric pigments between grape anthocyanins and flavonoids, such as catechins and procyanidins. View Full-Text
Keywords: red wines; yeasts; non-Saccharomyces; pyranoanthocyanins; vitisins; vinylphenolic adducts; polymeric pigments red wines; yeasts; non-Saccharomyces; pyranoanthocyanins; vitisins; vinylphenolic adducts; polymeric pigments
►▼ Show Figures 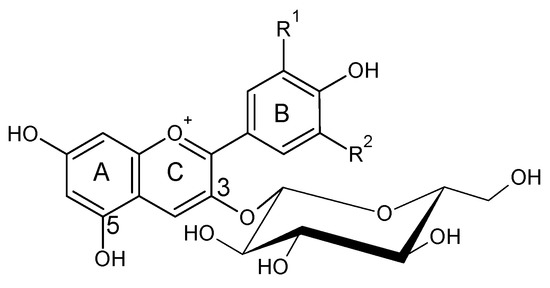