Enrofloxacin (ENR) is a widely used fluoroquinolone (FQ) antibiotic for antibacterial treatment of edible animal. In this study, a rapid and highly specific fluorescence polarization immunoassay (FPIA) was developed for monitoring ENR residues in animal foods. First, ENR was covalently coupled to bovine serum albumin (BSA) to produce specific polyclonal antibodies (pAbs). Three fluorescein-labeled ENR tracers (A, B, and C) with different spacers were synthesized and compared to obtain higher sensitivity. Tracer C with the longest arm showed the best sensitivity among the three tracers. The developed FPIA method showed an IC50 (50% inhibitory concentration) of 21.49 ng·mL−1 with a dynamic working range (IC20–IC80) of 4.30–107.46 ng·mL−1 and a limit of detection (LOD, IC10) of 1.68 ng·mL−1. The cross-reactivity (CR) of several structurally related compounds was less than 2%. The recoveries of spiked pork liver and chicken samples varied from 91.3% to 112.9%, and the average coefficients of variation were less than 3.83% and 5.13%, respectively. The immunoassay took only 8 min excluding sample pretreatment. This indicated that the established method had high sensitivity, specificity, and the advantages of simplicity. Therefore, the proposed FPIA provided a useful screening method for the rapid detection of ENR residues in pork liver and chicken. View Full-Text
Keywords: enrofloxacin; fluorescence polarization immunoassay; antibody; pork liver; chicken enrofloxacin; fluorescence polarization immunoassay; antibody; pork liver; chicken
►▼ Show Figures 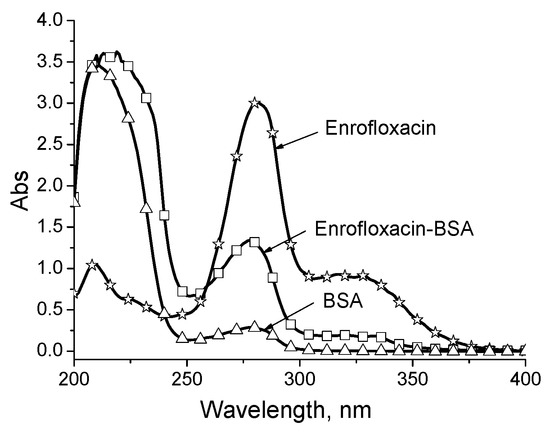