Exploration in the Mechanism of Action of Licorice by Network Pharmacology

In this study, chestnut shells (CS) were used in order to obtain bioactive compounds through different extraction procedures. The aqueous extracts were chemically characterized. The highest extraction yield and total phenolic content was obtained by conventional liquid extraction (CLE). Gallic and protocatechuic acids were the main simple phenols in the extract, with 86.97 and 11.20 mg/g chestnut shells dry extract (CSDE), respectively. Six tumor cell lines (DU 145, PC-3, LNCaP, MDA-MB-231, MCF-7, and HepG2) and one normal prostate epithelial cell line (PNT2) were exposed to increasing concentration of CSDE (1–100 µg/mL) for 24 h, and cell viability was evaluated using 3-(4,5-dimethylthiazole-2-yl)-2,5-diphenyltetrazolium bromide MTT assay. A reduced rate in cell viability was observed in DU 145, PC-3, LNCaP, and MCF-7 cells, while viability of the other assessed cells was not affected, except for PNT2 cells at a concentration of 100 μg/mL. Furthermore, CSDE—at concentrations of 55.5 and 100 µg/mL—lead to a significant increase of apoptotic cells in DU 145 cells of 28.2% and 61%, respectively. In conclusion, these outcomes suggested that CS might be used for the extraction of several polyphenols that may represent good candidates for alternative therapies or in combination with current chemotherapeutics. View Full-Text
Keywords: chestnut shells; polyphenols; bioactive compounds; apoptosis; cytotoxicity; human cell lines chestnut shells; polyphenols; bioactive compounds; apoptosis; cytotoxicity; human cell lines
►▼ Show Figures 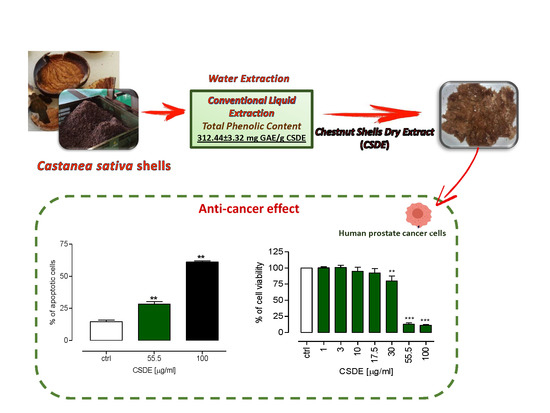