Se Nanoparticles Induce Changes in the Growth, Antioxidant Responses, and Fruit Quality of Tomato Developed under NaCl Stress
Next Article in Special Issue

Mixtures of different Cannabis sativa phytocannabinoids are more active biologically than single phytocannabinoids. However, cannabis terpenoids as potential instigators of phytocannabinoid activity have not yet been explored in detail. Terpenoid groups were statistically co-related to certain cannabis strains rich in Δ9-tetrahydrocannabinolic acid (THCA) or cannabidiolic acid (CBDA), and their ability to enhance the activity of decarboxylase phytocannabinoids (i.e., THC or CBD) was determined. Analytical HPLC and GC/MS were used to identify and quantify the secondary metabolites in 17 strains of C. sativa, and correlations between cannabinoids and terpenoids in each strain were determined. Column separation was used to separate and collect the compounds, and cell viability assay was used to assess biological activity. We found that in “high THC” or “high CBD” strains, phytocannabinoids are produced alongside certain sets of terpenoids. Only co-related terpenoids enhanced the cytotoxic activity of phytocannabinoids on MDA-MB-231 and HCT-116 cell lines. This was found to be most effective in natural ratios found in extracts of cannabis inflorescence. The correlation in a particular strain between THCA or CBDA and a certain set of terpenoids, and the partial specificity in interaction may have influenced the cultivation of cannabis and may have implications for therapeutic treatments. View Full-Text
Keywords: Cannabis sativa; phytocannabinoids; terpenoids; entourage effect; cancer cell line Cannabis sativa; phytocannabinoids; terpenoids; entourage effect; cancer cell line
►▼ Show Figures 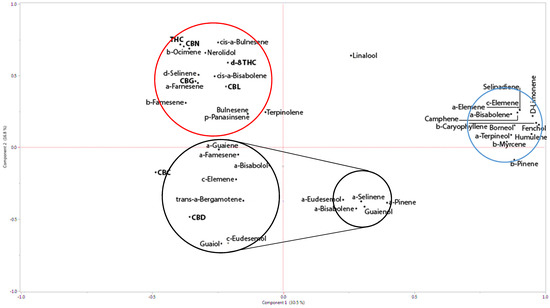