Do We Need Anti-Prion Compounds to Treat Alzheimer’s Disease?
Next Article in Special Issue

8-Hydroxydaidzein (8-OHDe), an ortho-hydroxylation derivative of soy isoflavone daidzein isolated from some fermented soybean foods, has been demonstrated to possess potent anti-inflammatory activity. However, the isoflavone aglycone is poorly soluble and unstable in alkaline solutions. To improve the aqueous solubility and stability of the functional isoflavone, 8-OHDe was glucosylated with recombinant amylosucrase of Deinococcus geothermalis (DgAS) with industrial sucrose, instead of expensive uridine diphosphate-glucose (UDP-glucose). One major product was produced from the biotransformation, and identified as 8-OHDe-7-α-glucoside, based on mass and nuclear magnetic resonance spectral analyses. The aqueous solubility and stability of the isoflavone glucoside were determined, and the results showed that the isoflavone glucoside was almost 4-fold more soluble and more than six-fold higher alkaline-stable than 8-OHDe. In addition, the anti-inflammatory activity of 8-OHDe-7-α-glucoside was also determined by the inhibition of lipopolysaccharide-induced nitric oxide production in RAW 264.7 cells. The results showed that 8-OHDe-7-α-glucoside exhibited significant and dose-dependent inhibition on the production of nitric oxide, with an IC50 value of 173.2 µM, which remained 20% of the anti-inflammatory activity of 8-OHDe. In conclusion, the well-soluble and alkaline-stable 8-OHDe-7-α-glucoside produced by recombinant DgAS with a cheap substrate, sucrose, as a sugar donor retains moderate anti-inflammatory activity, and could be used in industrial applications in the future. View Full-Text
Keywords: 8-hydroxydaidzein; stable; soluble; anti-inflammation; amylosucrase; Deinococcus geothermalis 8-hydroxydaidzein; stable; soluble; anti-inflammation; amylosucrase; Deinococcus geothermalis
►▼ Show Figures 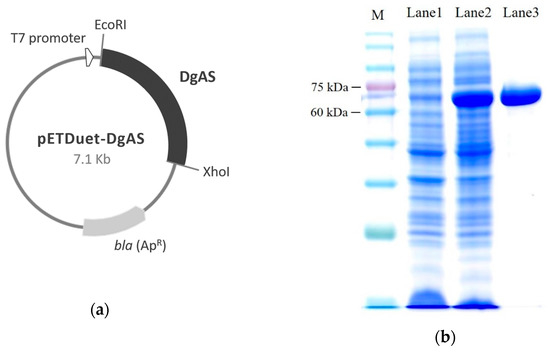