An inducible promoter region, PTTMP (tetramethylpyrazine [TTMP]), has been identified upstream of the tpdABC operon, which contains the genes required for the initial degradation of 2,3,5,6-tetramethylpyrazine in Rhodococcus jostii TMP1 bacteria. In this work, the promoter region was fused with the gene for the enhanced green fluorescent protein (EGFP) to investigate the activity of PTTMP by measuring the fluorescence of bacteria. The highest promoter activity was observed when bacteria were grown in a nutrient broth (NB) medium supplemented with 5 mM 2,3,5,6-tetramethylpyrazine for 48 h. Using a primer extension reaction, two transcriptional start sites for tpdA were identified, and the putative −35 and −10 promoter motifs were determined. The minimal promoter along with two 15 bp long direct repeats and two 7 bp inverted sequences were identified. Also, the influence of the promoter elements on the activity of PTTMP were determined using site-directed mutagenesis. Furthermore, PTTMP was shown to be induced by pyrazine derivatives containing methyl groups in the 2- and 5-positions of the heterocyclic ring, in the presence of the LuxR family transcriptional activator TpdR. View Full-Text
Keywords: Rhodococcus sp., inducible promoter; 2,3,5,6-tetramethylpyrazine; LAL subfamily; LuxR Rhodococcus sp., inducible promoter; 2,3,5,6-tetramethylpyrazine; LAL subfamily; LuxR
►▼ Show Figures 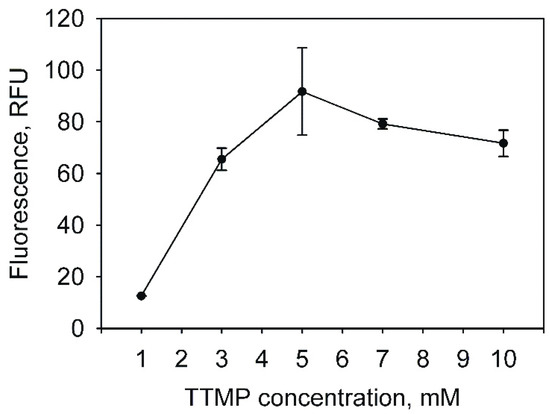