Even though essential oils (EOs) have been used for therapeutic purposes, there is now a renewed interest in the antimicrobial properties of phytochemicals and EOs in particular. Their demonstrated low levels of induction of antimicrobial resistance make them interesting for bactericidal applications, though their complex composition makes it necessary to focus on the study of their main components to identify the most effective ones. Herein, the evaluation of the antimicrobial action of different molecules present in EOs against planktonic and biofilm-forming Gram-positive (Staphylococcus aureus) and Gram-negative (Escherichia coli) bacteria was assessed. The bactericidal mechanisms of the different molecules, as well as their cytocompatibility, were also studied. Carvacrol, cinnamaldehyde, and thymol exhibit the highest in vitro antimicrobial activities against E. coli and S. aureus, with membrane disruption the bactericidal mechanism identified. The addition of those compounds (≥0.5 mg/mL) hampers S. aureus biofilm formation and partially eliminates preformed biofilms. The subcytotoxic values of the tested EO molecules (0.015–0.090 mg/mL) are lower than the minimum inhibitory and bactericidal concentrations obtained for bacteria (0.2–0.5 mg/mL) but are higher than that obtained for chlorhexidine (0.004 mg/mL), indicating the reduced cytotoxicity of EOs. Therefore, carvacrol, cinnamaldehyde, and thymol are molecules contained in EOs that could be used against E. coli– and S. aureus–mediated infections without a potential induction of bactericidal resistance and with lower cell toxicity than the conventional widely used chlorhexidine. View Full-Text
Keywords: antimicrobial; essential oils; monoterpenoids; cytotoxicity; wound dressings antimicrobial; essential oils; monoterpenoids; cytotoxicity; wound dressings
►▼ Show Figures 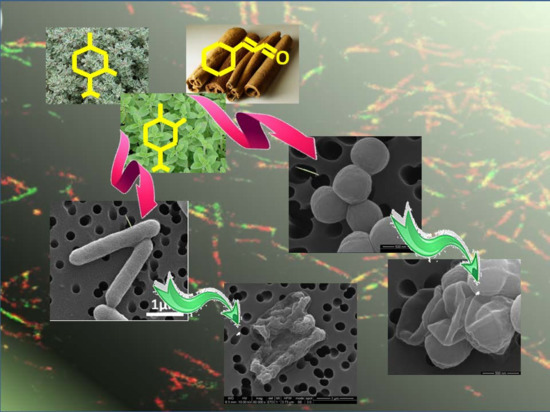