Strategies for Enhancing the Permeation of CNS-Active Drugs through the Blood-Brain Barrier: A Review

Tea (Camellia sinensis) is a popular plant which originated in the southwest of China. Currently, tea is cultivated in more than hundred countries worldwide [1].Leaves of tea plants are brewed into tea which is the most popular non-alcoholic beverage in the world. Tea cultivation in China is faced with several biotic stressors, of which tea geometrid (Ectropis obliqua) is the most significant [2]. Tea geometrid feeds on tea shoots and causes serious hindrances to tea production and quality, resulting in huge economic losses [3]. Several methods have been developed to control tea geometrid, yet pesticide use has been the primary technique [4]. However, pesticide use may result in severe ecological and environmental issues. In addition, residues from pesticides also pose serious health hazards to humans [5]. It is imperative to explore new effective and environmentally friendly techniques for the control of tea geometrid.
In the early 20th century several studies revealed that special chemicals known as priming agents or elicitors can induce plants’ resistance to diseases [6,7]. Usually elicitors do not inhibit pathogens directly, but rather confer to plants the ability to resist pathogens, a mechanism known as acquired immunity or systemic acquired resistance (SAR). Not only do elicitors induce plant resistance to pathogens, but also to herbivores. Most widely used elicitors include salicylic acid (SA), jasmonic acid (JA), benzothiadiazole (BTH) and β-aminobutyric acid (BABA) [8]. Wakeil reported that foliar application of jasmonic acid on leaves of wheat restrained the development of the insect pests [9]. It is also reported that HrPNEa could induce the Myzus persica resistance signal transportation in Arabidopsis thaliana [10]. Similarly, JA was found to induce the defense-related enzymes activities in cotton seedlings, and significantly inhibited the relative growth rate of Helicoverpa armigera [11].Series of studies conducted on the insect resistance ability of tea plants, reported that JA can induce tea plants’ resistance to Ectropis oblique [12,13] . Also treatment of tea plants with SA resulted in increased probing number and significant decrease in ingestion duration of tea leaf hopper Empoasca onukii [14]. Xin et al. also reported that (Z)-3-hexenol treatment increased the polyphenol oxidase (PPO) activity and volatile production in tea plants. The induced tea plants reduced the performance of tea geometrid and became highly attractive to the main parasitoid wasp, Apanteles glomeratus [2].
According to the literature, the upregulation of PPO and POD, as well as the accumulation of polyphenols may be disadvantageous to herbivores. Several studies have reported that PPO and POD as well as PAL are involved in induced plant resistance to herbivores, and elicitors which induce the activity of these enzymes could; therefore, enhance plants resistance to herbivores [6,15,16]. The action way of the leaf enzymes and phenols in tea plants to herbivores may, in some extent, be similar to that in pathogens except for the digestive system, where the mid-gut enzymes may be affected by the leaf constituent [17,18]. In our previous study it was found that BABA and BTH could induce the up-regulation of PAL and PPO as well as the polyphenol accumulation in tea plants [1]. It could; therefore, be speculated that BABA and BTH may play a critical role in inducing tea plant’s resistance to herbivores and pathogens. Studies have shown that BABA and BTH induce disease resistance, and; therefore, it is necessary to explore the possibility of these elicitors to induce insect resistance ability to tea plants. On this account, the present study was conducted to investigate the biochemical changes in leaves of tea plants treated with BABA and BTH, and the role these elicitors play in inducing resistance in tea plants to Ectropis obliqua. The result in this study will contribute to the exploration of the possibility of developing a new way to control Ectropis obliqua based on the principle of systemic acquired resistance.

2.2. Effect of BTH and BABA on PPO and PAL Activities of Tea Plant

2.3. Effect of BTH and BABA on Growth of Geometrid Larvae

2.4. Effect of BTH and BABA on Midgut Proteinase Activity of Geometrid Larvae

2.5. Effect of BTH and BABA on Geometrid Larvae Development

The study was conducted in a 10-year-old ‘Longjing43’ tea cultivar plantation at tea garden of Sun Yat-sen Mausoleum scenic spot in Nanjing, Jiangsu Province, China. BABA and BTH were purchased from Gray Asia Chemical Co. Ltd. (Chengdu, China). The chemicals were dissolved in 95% ethanol, and then diluted with water to obtain final concentrations of 25, 50 and 75 mg/L BTH solutions (marked as BTH-1, BTH-2 and BTH-3, respectively), and 100, 200 and 400 mg/L BABA solutions (marked as BABA-1, BABA-2 and BABA-3, respectively). Twenty-one experimental plots each of 15 m2 representing various levels of BABA, BTH and control treatments were established. Each treatment was replicated three times. For each treatment plot, 1 L of elicitor was sprayed on the tea leaves, while the control plot received no application.

Instar larvae of tea geometrid were collected from the tea garden in Sun Yat-sen Mausoleum scenic spot, Nanjing, China and kept in a cuboid box (enclosed with nylon) under room temperature. The insects were fed with ‘Longjing 43’ tea leaves and allowed to reproduce. The second generation tea geometrid larvae were collected and kept in a light incubator with 25 ± 1 °C, 75% RH and a 16/8 h photoperiod until 2nd instar stage, then were selected for the experiment.

4.3. Analysis of PPO and PAL Activities

Tea shoots were picked at 6, 24, 48 and 72 h after treatments respectively and placed in liquid nitrogen for physiology and biochemical analysis according to the methods described by Yang et al., with modifications [24]. Fresh leaves (0.5 g) were used for crude enzyme extraction [14]. For PPO analysis 3 mL reaction mixture (consisting of pH 7.0 phosphate buffer solution, 0.1%Pro and 0.1% pyrocatechol at a volume ratio of 10:2:3) incubated with 1 mL natural enzyme was used, while for the assessment of PAL activities, 1 mL natural enzyme was added to the 2 mL reaction mixture (containing 1 mL pH 7.0 phosphate buffer solution and 1 mL 0.02 mol·L−1 Phe). Both mixtures were incubated at 37 °C for 30 min, and then stopped by 0.5 mL 1 mol·L−1 hydrochloric acid. Content of soluble protein was measured using the approach introduced by Bradford et al. based on the bovine serum albumin protein [50]. The unit for quantifying enzyme activity was described individually as the absorbance by 0.1 for PPO and 0.01 for PAL and expressed as U mg−1 protein min−1.

After 72 h of the chemical treatments, tea leaves were randomly collected from the experimental plots at two days interval, placed in a plastic box and stored at 4 °C. The leaves were cut into 1 cm diameter discs and fed to tea geometrid larvae. The experiment was conducted in a petri dish (9 cm in diameter) [13,14]. Each treatment concentration including the control represented a petri dish, and was replicated three times, making a total of 21 petri dishes. Each petri dish also contained three 2nd instar larvae of tea geometrid. A known weight of 8 pieces of 1 cm diameter discs of the treated leaves were fed to the larvae in the corresponding petri dishes until the larvae reached the pupa stage. From start of the experiment, the test leaf discs were replaced after every 48 h and then every 24 h from the eighth day, with corresponding data taken on weight of remaining leaf disc and body weight of larvae. After the eighth day pupation rate, feathering rate and survival rate of pupa were also recorded every 48 h. The development duration of tea geometrid was calculated from when feeding of larvae began till pupa formation.

The larvae were weighed, homogenized in liquid nitrogen and centrifuged at 15,000 g, 4 °C for 20 min. The supernatant was used for the midgut proteinase activity determination following the protocol described by Gui et al. with modifications [13]. The activities of the low and high alkaline trypsin-like enzyme and chymotrypsin-like enzyme were also measured.

Fresh leaves were collected after 72 h of chemical treatments. Total RNA was extracted according to the method described by Fu [51]. The total RNA was then reverse-transcribed into first strand cDNA using 20 μL Super RT cDNA Kit (BioTeke, Beijing, China) with 0.2 μg RNA, 1 μL oligo dT, 4 μL dNTP mixture, 4 μL 5× first-strand buffer, 1 μL M-MLV reverse transcriptase and 1 μL RNase inhibitor. The transcription process included two steps 50 °C for 40 min and 70 °C for 10 min. PAL and PPO gene primers (Table 3) for the qRT-PCR analysis were designed and synthesized by Invitrogen Co. Ltd. β-actin was used as the reference gene to analyze the property of PAL and PPO genes quantitatively. The PCR amplification condition used involved 40 cycles of 95 °C for 60 s, 95 °C for 10 s, 60 °C for 10 s and 72 °C for 30 s. The relative abundance was noted using the 2−∆∆CT method. Each measurement was repeated 3 times.

In this study, foliar application of benzothiadiazole (BTH) and β-aminobutyric acid (BABA) ultimately inhibited growth, development and performance of geometrid larvae as characterized by decreased body weight, prolonged development duration, and lower rates of survival, pupation and emergence of tea geometrid larvae relative to the control. Analysis of hydrolysis of synthetic substrates also revealed that chymotrypsin-like enzyme activity present in larval midgut extracts was not significantly inhibited by BTH and BABA. Moreover, proteinase activity was found to be inversely proportional to the age of tea geometrid. The optimal effect of BTH and BABA was achieved at BTH-3 (75 mg/L) and BABA-3 (400 mg/L) respectively. This; therefore, suggests that BTH and BABA, at higher concentration, have the potential to induce systemic resistance in tea plant to Ectropis obliqua. The results in this study would contribute to the knowledge base of BTH- and BABA-mediated plant resistance to insects. 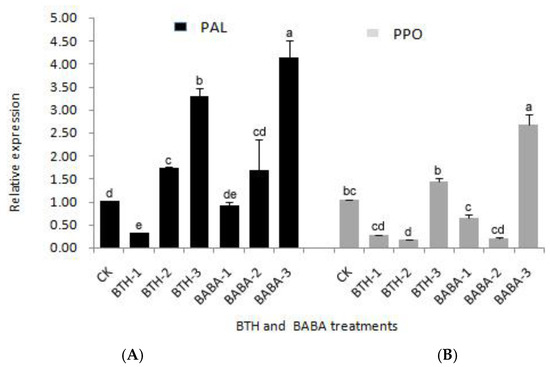 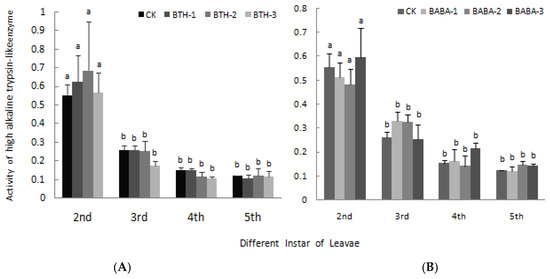 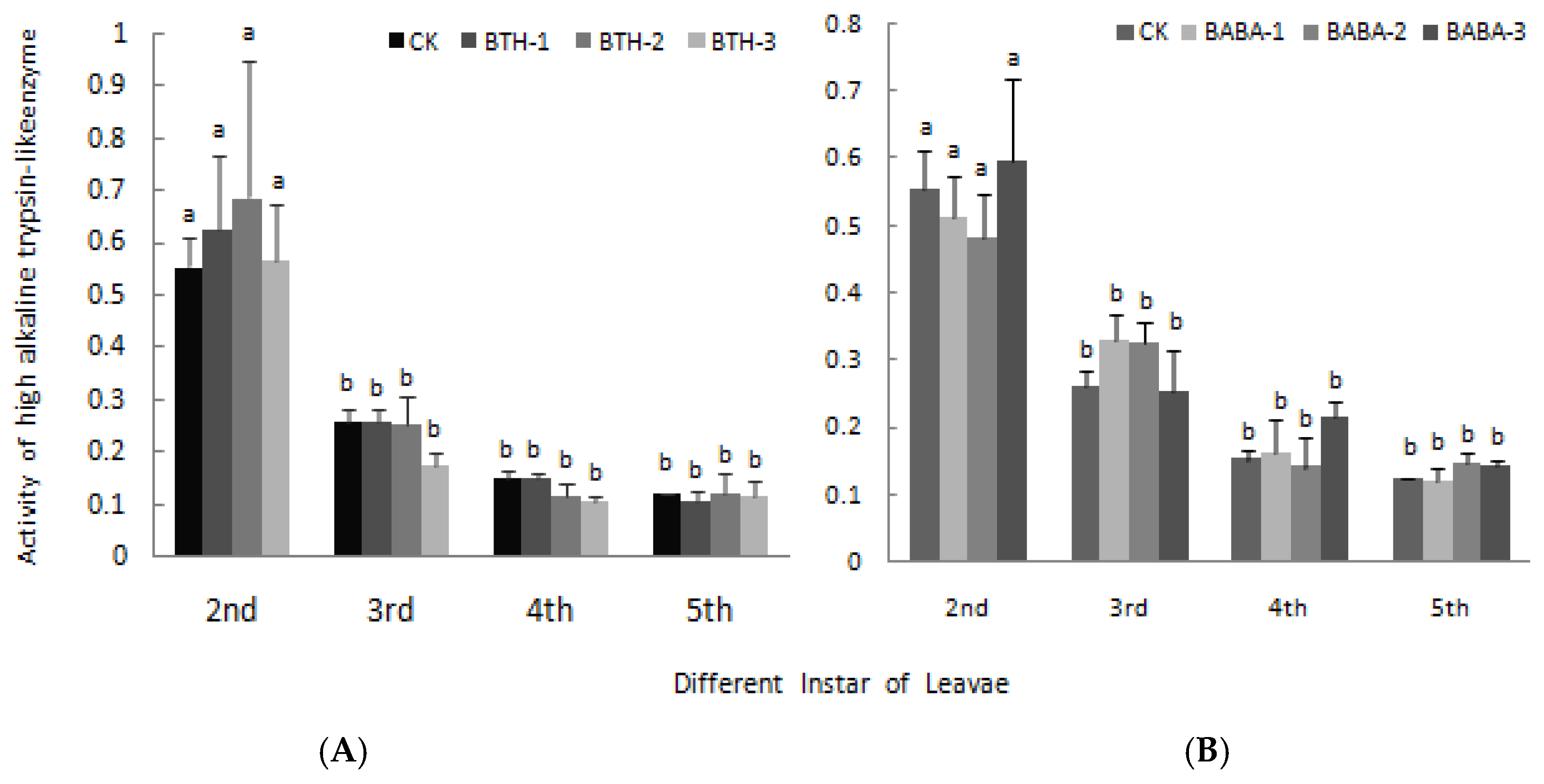