:
Cannabidiol (CBD)-based oil preparations are becoming extremely popular, as CBD has been shown to have beneficial effects on human health. CBD-based oil preparations are not unambiguously regulated under the European legislation, as CBD is not considered as a controlled substance. This means that companies can produce and distribute CBD products derived from non-psychoactive hemp varieties, providing an easy access to this extremely advantageous cannabinoid. This leaves consumers with no legal quality guarantees. The objective of this project was to assess the quality of 14 CBD oils commercially available in European countries. An in-depth chemical profiling of cannabinoids, terpenes and oxidation products was conducted by means of GC-MS and HPLC-Q-Exactive-Orbitrap-MS in order to improve knowledge regarding the characteristics of CBD oils. Nine out of the 14 samples studied had concentrations that differed notably from the declared amount, while the remaining five preserved CBD within optimal limits. Our results highlighted a wide variability in cannabinoids profile that justifies the need for strict and standardized regulations. In addition, the terpenes fingerprint may serve as an indicator of the quality of hemp varieties, while the lipid oxidation products profile could contribute in evaluation of the stability of the oil used as milieu for CBD rich extracts.
Keywords:
cannabidiol; CBD oil; terpenes; hemp seed oil; GC-MS; HPLC-Q-Exactive-Orbitrap-MS 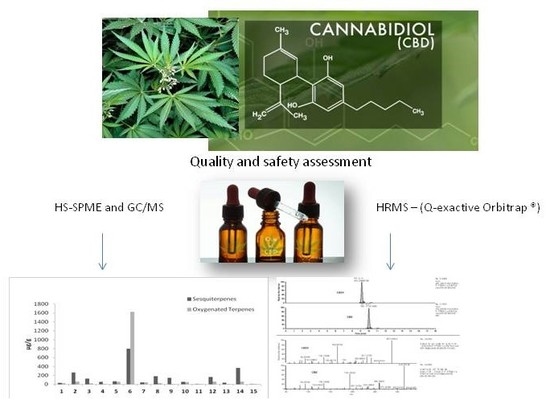 Fourteen samples of commercially available CBDs oil were purchased on the Internet between December 2017 and January 2018. The purchase was based on the main product brands available on the European market. Table 3 summarizes the main characteristics of the samples. Samples were kept at room temperature (as indicated by the manufacturers) before analyses and sample codes (Oils 2–15) were assigned to them in accordance with the order of acquisition. Bedrolite® oil olive extract (assigned as Oil_1) was obtained from a Bedrolite Bedrocan International, Postbus, CA, Veendam, Netherlands® medical Cannabis chemotype. Exhaustive analytical procedures were described in details in our recently published article [12].

One hundred mg of each oil sample were weighed and put into 20 mL glass vials along with 100 μL of the inyernal standard (IS, 4-nonylphenol, 2000 μg/mL in 2-propanol). Each vial was fitted with a cap equipped with a silicon/PTFE septum (Supelco). A temperature of 37 °C was selected as both as the extraction and equilibration temperature according to previous published research, in order to prevent possible matrix alterations ensuring the most efficient adsorption of volatile compounds onto the SPME fibre [15,16]. To keep the temperature constant during analysis, the vials were maintained in a cooling block (CTC Analytics, Zwingen, Switzerland). At the end of the sample equilibration time (30 min), a conditioned (60 min at 280 °C) SPME fiber was exposed to the headspace of the sample for 120 min using a CombiPAL system injector autosampler (CTC Analytics). All analytical parameters were already validated in our previous research [12].
Analyses were performed with a Trace GC Ultra coupled to a Trace DSQII quadrupole mass spectrometer (MS) (Thermo-Fisher Scientific, Waltham, MA, USA) equipped with an Rtx-Wax column (30 m × 0.25 mm i.d. × 0.25 μm film thickness) (Restek, Bellefonte, PA, USA). The oven temperature program was: from 35 °C, held for 8 min, to 60 °C at 4 °C/min, then from 60 to 160 °C at 6 °C/min and finally from 160 to 200 at 20 °C/min. Helium was the carrier gas, at a flow rate of 1 mL/min. Carry over and peaks originating from the fibres were regularly assessed by running blank samples. After each analysis fibres were immediately thermally desorbed in the GC injector for 5 min at 250 °C to prevent contamination. The MS was operated in electron impact (EI) ionisation mode at 70 eV. An alkanes mixture (C8-C22, Sigma R 8769) was run under the same chromatographic conditions as the samples to calculate the Kovats Retention Indices (RI) of the detected compounds. The mass spectra were obtained by using a mass selective detector, a multiplier voltage of 1456 V, and by collecting the data at rate of 1 scan/s over the m/z range of 35–350. Compounds were identified by comparing the retention times of the chromatographic peaks with those of authentic compounds analyzed under the same conditions when available, by comparing the Kovats retention indices with the literature data and through the National Institute of Standards and Technology (NIST) MS spectral database. The quantitative evaluation was performed using the internal standard procedure and the results were finally expressed as μg/g or mg/g IS equivalents of each volatile compounds. All analyses were done in triplicate.

The cannabinoids profile and content were evaluated by the procedure recently published by us [12]. Briefly, the oil samples for HPLC-Q-Exactive-Orbitrap-MS analysis were prepared by dissolving 100 mg of each oil in 10 mL of isopropanol. After adding the 1 μg/mL of IS, 10 μL of each sample were diluted in 890 μL of initial mobile phase from which 2 μL was injected. Chromatography was accomplished on an HPLC system (Thermo Fisher Scientific, San Jose, CA, USA) that was made up of a Surveyor MS quaternary pump with a degasser, a Surveyor AS autosampler with a column oven and a Rheodyne valve with a 20 μL loop. Analytical separation was carried out using a reverse-phase HPLC column 150 × 2 mm i.d., 4 μm, Synergi Hydro RP, with a 4 × 3 mm i.d. C18 guard column (Phenomenex, Torrance, CA, USA). The mobile phase used in the chromatographic separation consisted of a binary mixture of solvents A (0.1% aqueous formic acid) and B (acetonitrile). The gradient was initiated with 60% eluent A with a linear decrease up to 95% in 10 min. This condition was maintained for 4 min. The mobile phase was returned to initial conditions at 14 min, followed by a 6-min re-equilibration period (total run time: 20 min). The flow rate was 0.3 mL/min. The column and sample temperatures were 30 °C and 5 °C, respectively. The mass spectrometer Thermo Q-Exactive Plus (Thermo Scientific) was equipped with a heated electrospray ionisation (HESI) source. Capillary temperature and vaporiser temperature were set at 330 and 280 °C, respectively, while the electrospray voltage was adjusted at 3.50 kV (operating in both positive and negative mode). Sheath and auxiliary gas were 35 and 15 arbitrary units, with S lens RF level of 60. The mass spectrometer was controlled by the Xcalibur 3.0 software (Thermo Fisher Scientific). The exact mass of the compounds was calculated using Qualbrowser in Xcalibur 3.0 software. The FS-dd-MS2 (full scan data-dependent acquisition) in both positive and negative mode was used for both screening and quantification purposes. Resolving power of FS adjusted on 140,000 FWHM at m/z 200, with scan range of m/z 215–500. The automatic gain control (AGC) was set at 3 × 106, with an injection time of 200 ms. A targeted MS/MS (dd-MS2) analysis operated in both positive and negative mode at 35,000 FWHM (m/z 200). The AGC target was set to 2 × 105, with the maximum injection time of 100 ms. Fragmentation of precursors was optimised as two-stepped normalised collision energy (NCE) (25 and 40 eV). Detection was based on calculated exact mass of the protonated/deprotonated molecular ions, at least one corresponding fragment and on retention time of target compounds [12]. Extracted ion chromatograms (EICs) were obtained with an accuracy of 2 ppm m/z from total ion chromatogram (TIC) engaging the m/z corresponding to the molecular ions [M + H]+ 315,23145 for CBD and THC, 311,20020 for CBN, 317.24716 for CBG and 311.2024 for CBN. In ESI- the molecular ions [M−H]− considered were 357.2164 for CBDA and THCA, while CBGA was detected by 359,22269.

Taken together, the results presented in this study indicate the pronounced variability of CBD concentrations in commercialized CBD oil preparations. The differences found in the overall cannabinoids profiles accompanied with discrepancies revealed for the terpenes fingerprint justify the necessity to provide firmer regulation and control. Precise information regarding CBD oil composition is crucial for consumers, as individual doses throughout the administration period have to be adapted according to CBD bioavailability. This is of fundamental importance regarding consumer safety, as CBD oil preparations are also used in therapeutical purposes, regardless of the fact that they are registered as dietary supplements.

The authors want to acknowledge Carlo Privitera for his helpful suggestions and skills regarding the therapeutics applications of CBD oils formulations. 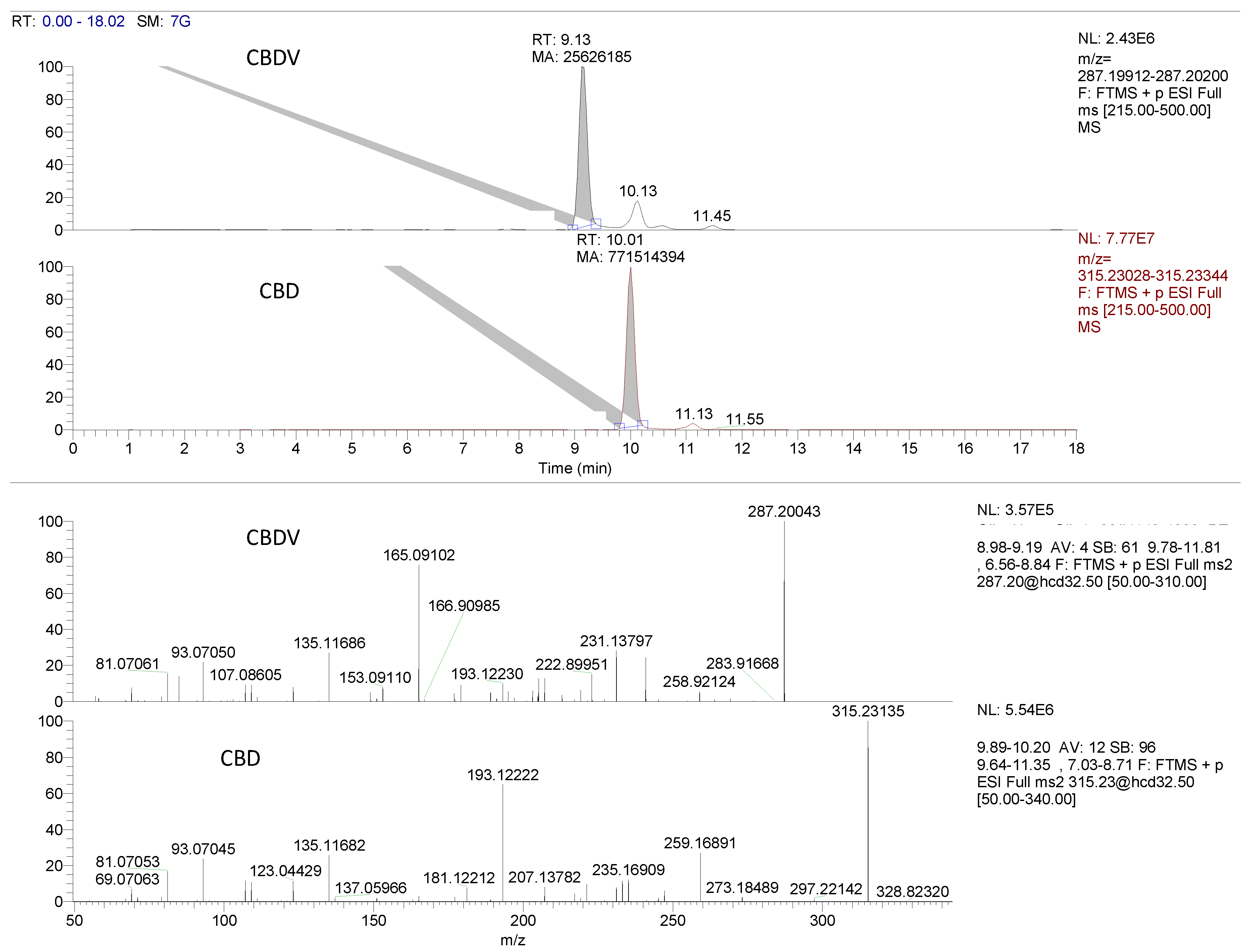 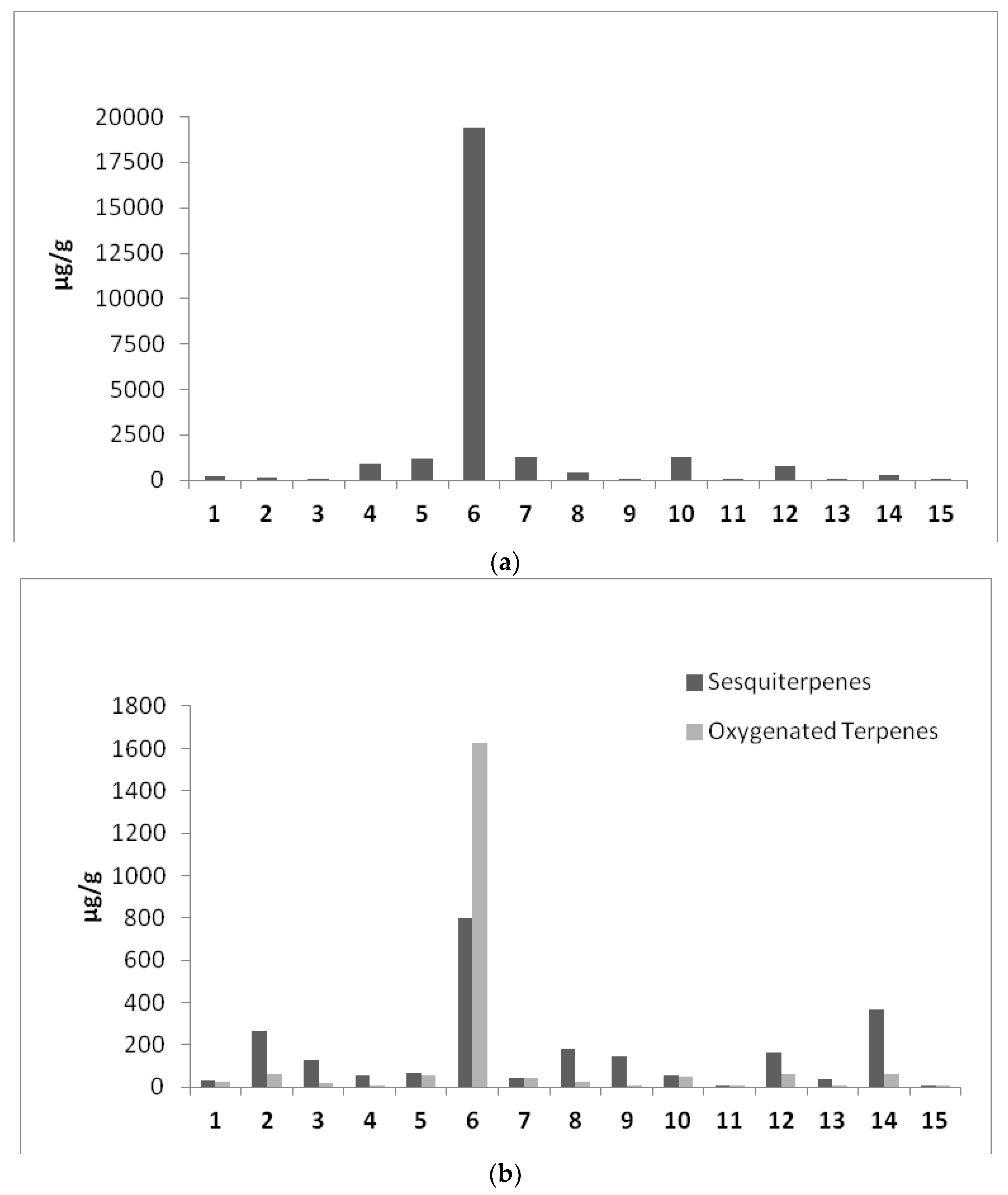