Increasing the Strength and Production of Artemisinin and Its Derivatives

Two major obstacles for successful cancer treatment are the toxicity of cytostatics and the development of drug resistance in cancer cells during chemotherapy. Acquired or intrinsic drug resistance is responsible for almost 90% of treatment failure. For this reason, there is an urgent need for new anticancer drugs with improved efficacy against cancer cells, and with less toxicity on normal cells. There are impressive examples demonstrating the success of natural plant compounds to fight cancer, such as Vinca alkaloids, taxanes, and anthracyclines. Artesunic acid (ARTA), a drug for malaria treatment, also exerts cytotoxic activity towards cancer cells. Multidrug resistance often results from drug efflux pumps (ABC-transporters) that reduce intracellular drug levels. Hence, it would be interesting to know, whether ARTA could overcome drug resistance of tumor cells, and in what way ABC-transporters are involved. Different derivatives showing improved features concerning cytotoxicity and pharmacokinetic behavior have been developed. Considering both drug sensitivity and resistance, we chose a sensitive and a doxorubicin-resistant leukemia cell line and determined the killing effect of ARTA on these cells. Molecular docking and doxorubicin efflux assays were performed to investigate the interaction of the derivatives with P-glycoprotein. Using single-cell gel electrophoresis (alkaline comet assay), we showed that the derivatives of ARTA induce DNA breakage and accordingly programmed cell death, which represents a promising strategy in cancer treatment. ARTA activated apoptosis in cancer cells by the iron-mediated generation of reactive oxygen species (ROS). In conclusion, ARTA derivatives may bear the potential to be further developed as anticancer drugs. View Full-Text
Keywords: chemotherapy; multi-drug resistance; artemisinin, egonol, thymoquinone, hybrids chemotherapy; multi-drug resistance; artemisinin, egonol, thymoquinone, hybrids
►▼ Show Figures 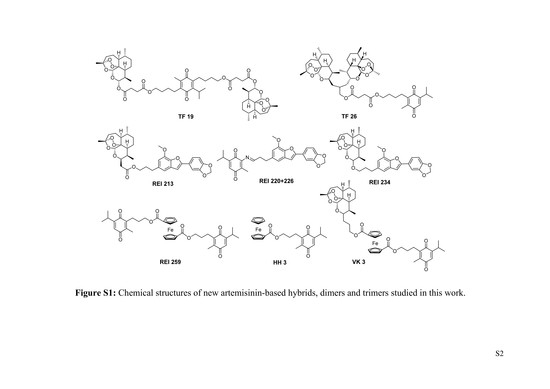