Molecular Modeling and Structural Stability of Wild-Type and Mutant CYP51 from Leishmania major: In Vitro and In Silico Analysis of a Laboratory Strain

Cutaneous leishmaniasis is a neglected tropical disease and a major public health in the most countries. Leishmania major is the most common cause of cutaneous leishmaniasis. In the Leishmania parasites, sterol 14α-demethylase (CYP51), which is involved in the biosynthesis of sterols, has been identified as an attractive target for development of new therapeutic agents. In this study, the sequence and structure of CYP51 in a laboratory strain (MRHO/IR/75/ER) of L. major were determined and compared to the wild-type strain. The results showed 19 mutations including seven non-synonymous and 12 synonymous ones in the CYP51 sequence of strain MRHO/IR/75/ER. Importantly, an arginine to lysine substitution at position of 474 resulted in destabilization of CYP51 (ΔΔG = 1.17 kcal/mol) in the laboratory strain; however, when the overall effects of all substitutions were evaluated by 100 ns molecular dynamics simulation, the final structure did not show any significant changes (p-value < 0.05) in stability parameter of the strain MRHO/IR/75/ER compared to the wild-type protein. The energy level for the CYP51 of wild-type and MRHO/IR/75/ER strain were −40,027.1 and −39,706.48 Kcal/mol respectively. The overall Root-mean-square deviation (RMSD) deviation between two proteins was less than 1 Å throughout the simulation and Root-mean-square fluctuation (RMSF) plot also showed no substantial differences between amino acids fluctuation of the both protein. The results also showed that, these mutations were located on the protein periphery that neither interferes with protein folding nor with substrate/inhibitor binding. Therefore, L. major strain MRHO/IR/75/ER is suggested as a suitable laboratory model for studying biological role of CYP51 and inhibitory effects of sterol 14α-demethylase inhibitors. View Full-Text
Keywords: Leishmania major; lanosterol 14α-demethylase; mutation; homology modeling; molecular dynamics; protein stability Leishmania major; lanosterol 14α-demethylase; mutation; homology modeling; molecular dynamics; protein stability
►▼ Show Figures 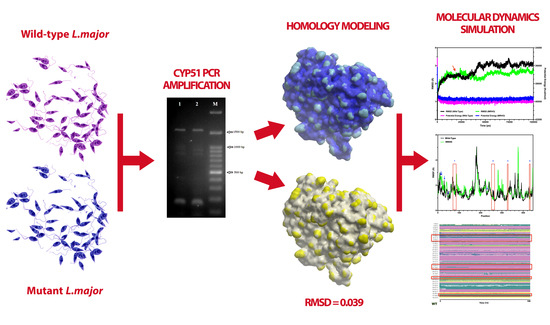