Various Chinese herbal medicines (CHMs) have shown beneficial liver protection effects. Jian-Gan-Bao (JGB), a functional herbal formula, consists of three famous CHMs, including Coriolus versicolor, Salvia miltiorrhiza and Schisandra chinensis, which has been used as a folk medicine for several chronic liver diseases. In the present study, we aim systemically to evaluate the effects of JGB on acute and chronic alcoholic liver diseases (ALD) as well as non-alcoholic fatty liver disease (NAFLD) in mouse models, and identify its potential bioactive components and mechanism of action. JGB showed preventive effects for acute and chronic ALD as well as NAFLD, while post-treatment of JGB showed no significant effect, suggesting the nature of JGB as a health supplement rather than a drug. Furthermore, a compound-target network was constructed to identify the potential bioactive compounds and pathways that regulate its hepatoprotective effects. There are 40 bioactive compounds and 15 related targets that have been identified via this network pharmacology study. Among them are miltirone, neocryptotanshinone II and deoxyshikonin, with desirable pharmaceutical properties. Pathways relating to inflammation, fatty acid oxidation, tumor necrosis factor (TNF) production and cell proliferation were predicted as bioactive compounds and potential underlying mechanisms, which should be the focus of study in this field in the future. View Full-Text
Keywords: Coriolus versicolor; Salvia miltiorrhiza; Schisandra chinensis; function herbal formula; liver disease; network pharmacology Coriolus versicolor; Salvia miltiorrhiza; Schisandra chinensis; function herbal formula; liver disease; network pharmacology
►▼ Show Figures 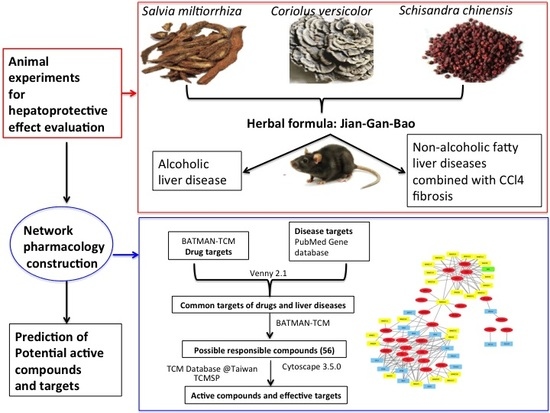