Garlic has played an important role in culinary arts and remedies in the traditional medicine throughout human history. Parasitic infections represent a burden in the society of especially poor countries, causing more than 1 billion infections every year and leading to around one million deaths. In this study, we investigated the mode of anti-parasitic activity of “wild garlics” Tulbaghia violacea and Allium ursinum dichloromethane extracts against parasites Trypanosoma brucei brucei and Leishmania tarentolae with regard to their already known antimicrobial activity. We also evaluated their cytotoxic potential against human cells. Both extracts showed a relevant trypanocidal and leishmanicidal activity, although L. tarentolae was less sensitive. We determined that the probable mode of action of both extracts is the irreversible inhibition of the activity of Trypanosoma brucei trypanothione reductase enzyme. The extracts showed a mild cytotoxic activity against human keratinocytes. They also exhibited weak—in most cases comparable—antibacterial and antifungal activity. HPLC-MS/MS analysis showed that both extracts are abundant in sulfur compounds. Thus, for the first time, the ability of Allium ursinum and Tulbaghia violacea to kill Trypanosoma sp. and Leishmania sp. parasites, probably by binding to and inactivating sulfur-containing compounds essential for the survival of the parasite, is shown. View Full-Text
Keywords: Tulbaghia violacea; Allium ursinum; garlic; sulfides; trypanocidal; leishmanicidal; antimicrobial activity; trypanothione reductase Tulbaghia violacea; Allium ursinum; garlic; sulfides; trypanocidal; leishmanicidal; antimicrobial activity; trypanothione reductase
►▼ Show Figures 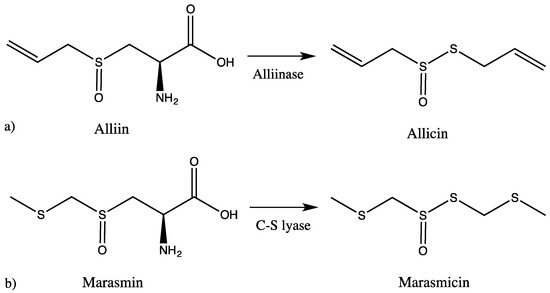