Lamiophlomis rotata (L. rotata), is known as “Daba” in the Tibetan region, Ajuga ovalifolia and Oreosolen wartii have also been utilized as substitutes for “Daba”, however, only L. rotata has been officially listed in the Chinese Pharmacopoeia for hemostasis preparations. To safely apply the traditional uses of the herb, internal transcribed spacer 2 (ITS2) DNA barcodes were employed to discriminate L. rotata from its adulterants. For further evaluation of the quality of different originating habitats, the chemical profiles of 25 samples were determined by ultra-high-performance liquid chromatography coupled with time-of-flight mass spectrometry (UPLC-QTOF-MS) coupled with multivariate analyses. ITS2 DNA barcodes differentiated L. rotata from O. wartii and A. ovalifolia accurately. A neighbor-joining (NJ) tree showed that three origins clustered into three clades. Forty-nine compounds were identified in the total ion current (TIC) profile of L. rotata. Additionally, two pairs of isomers were identified for the first time by using mass spectrometry fragmentation. The differences between the variable habitats were determined by multivariate statistical analysis of the UPLC-QTOF-MS data from 25 specimens. Ten compounds were identified as the characteristic markers distinguishing the sample from four geographical origins. The results also suggest that samples from Qinghai and Sichuan province would be the most suitable choice for traditional prescriptions and preparations. View Full-Text
Keywords: Lamiophlomis rotata; ITS2 DNA barcodes; UPLC-QTOF-MS; metabolomics; multivariate analysis Lamiophlomis rotata; ITS2 DNA barcodes; UPLC-QTOF-MS; metabolomics; multivariate analysis
►▼ Show Figures 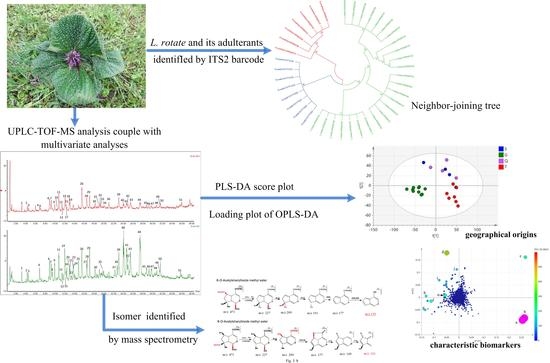