Berberine (BBR), a natural isoquinoline alkaloid derived from Chinese herbs, exerts many biological effects, including antiviral, antimicrobial, antidiarrhea, anti-inflammatory, and antitumor effects. In this study, a novel berberine nanoparticle (NP) consisting of heparin (HP) and BBR with or without being shelled with linear polyethyleneimine (LPEI) was developed to enhance its antitumor activity on osteosarcoma U-2 OS cells. With varying ratios of HP to BBR, HP/BBR NPs had a size ranging from 218.4 ± 3.9 to 282.0 ± 5.1 nm and zeta potential from −35.7 ± 0.4 to −51.9 ± 1.8 mV. After shelling with LPEI, the resultant NPs (HP/BBR/LPEI) possessed a size ranging from 226.3 ± 3.0 to 405.7 ± 85.2 nm and zeta potential from −46.5 ± 0.3 to −35.6 ± 0.5 mV; the encapsulation rate of BBR was close to 80%. The release profiles of both NPs were revealed to be slower than that of BBR solution. Results also showed that BBR and its two derived NPs reduced the viability of U-2 OS cells, and BBR NPs increased the cellular uptake of BBR. Cells were arrested at the G1 phase when treated individually with BBR and the two NPs (HP/BBR and HP/BBR/LPEI) and DNA condensation was induced. In addition, BBR and BBR NPs reduced the expression of mouse double minute 2 homolog (MDM2) but increased that of p53, and BBR NPs enhanced apoptotic effects. In short, heparin-based nanoparticles could be potential carriers for osteosarcoma treatment. View Full-Text
Keywords: Berberine; linear PEI; heparin; osteosarcoma; apoptosis Berberine; linear PEI; heparin; osteosarcoma; apoptosis
►▼ Show Figures 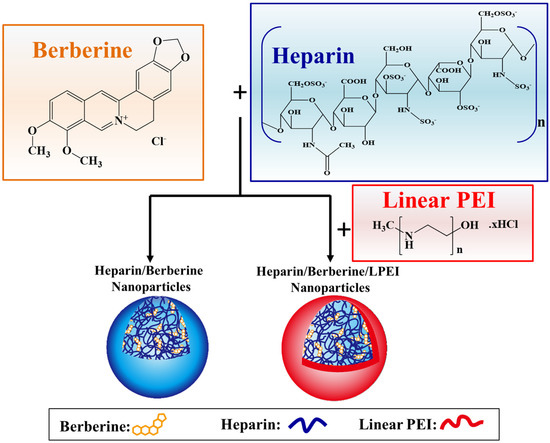