Neurodegenerative disorders such as amyotrophic lateral sclerosis (ALS), Alzheimer’s disease, and Parkinson’s disease, are characterized by the progressive loss of neurons in specific regions of the brain and/or spinal cord. Neuronal cell loss typically occurs by either apoptotic or necrotic mechanisms. Oxidative stress and nitrosative stress, along with excitotoxicity and caspase activation, have all been implicated as major underlying causes of neuronal cell death. Diverse nutraceuticals (bioactive compounds found in common foods) have been shown to have neuroprotective effects in a variety of in vitro and in vivo disease models. In the current study, we compared the neuroprotective effects of two polyphenolic compounds, rosmarinic acid and carnosic acid, which are both found at substantial concentrations in the herb rosemary. The capacity of these compounds to rescue primary cultures of rat cerebellar granule neurons (CGNs) from a variety of stressors was investigated. Both polyphenols significantly reduced CGN death induced by the nitric oxide donor, sodium nitroprusside (nitrosative stress). Rosmarinic acid uniquely protected CGNs from glutamate-induced excitotoxicity, while only carnosic acid rescued CGNs from caspase-dependent apoptosis induced by removal of depolarizing extracellular potassium (5K apoptotic condition). Finally, we found that carnosic acid protects CGNs from 5K-induced apoptosis by activating a phosphatidylinositol 3-kinase (PI3K) pro-survival pathway. The shared and unique neuroprotective effects of these two compounds against diverse modes of neuronal cell death suggest that future preclinical studies should explore the potential complementary effects of these rosemary polyphenols on neurodegenerative disease progression.
Keywords: nutraceuticals; rosemary; neuronal apoptosis; antioxidants; polyphenols nutraceuticals; rosemary; neuronal apoptosis; antioxidants; polyphenols

According to a 2015 United Nations report, the number of people over 60 is expected to double in the next 35 years to almost 2.1 billion people. As our population shifts to a larger proportion of elderly individuals, neurodegenerative disorders including amyotrophic lateral sclerosis (ALS), Parkinson’s disease (PD), and Alzheimer’s disease (AD) will continue to become more prevalent. Because most neurodegenerative diseases are primarily sporadic in nature, an effective method of treatment would be to prevent or slow the dying of neurons in affected brain regions. Inflammation, misfolded proteins, mitochondrial dysfunction, oxidative stress, nitrosative stress, apoptosis, and excitotoxicity are all considered major factors underlying the pathology of various neurodegenerative diseases [1,2]. Thus, therapeutic agents that target several of these disease mechanisms may be the most viable treatment options.
Since ancient times, plants have been used as natural treatments for acute and chronic disorders. Over the last few decades, natural compounds possessing medicinal benefits (i.e., nutraceuticals) have been proposed as promising treatment options for many diseases due to their intrinsic antioxidant abilities in scavenging reactive oxygen species (ROS) and reactive nitrogen species (RNS) [3,4]. The activities of many of these compounds, such as rosmarinic acid and carnosic acid, have been extensively investigated using in vitro and in vivo models [5]. Manufactured or commercially synthesized drugs sometimes display more activity than natural compounds. However, natural compounds often produce long term benefits and generally elicit fewer side effects [6]. Many nutraceuticals are classified as (poly)phenolic antioxidant compounds, like phenolic acids, flavonoids, tannins, and lignans [7,8].
The rosemary shrub (Rosmrinus officinalis) is a member of the mint family (Lamiaceae) found originally in the Mediterranean region, and now found abundantly throughout the world. Commonly used as an herbal spice in food, rosemary has long been used as an alternative therapy for different illnesses including headaches, inflammatory diseases, and stomach problems [9,10]. Rosemary has a significant intrinsic antioxidant activity due to its molecular components, such as rosmarinic acid and carnosic acid, and both compounds have demonstrated neuroprotective effects in different neurodegenerative diseases. The main constituent, rosmarinic acid (Figure 1A), is a naturally occurring hydroxylated polyphenol molecule found in several plant families, including Lamiaceae, Boraginaceae, and Blechnaceae [11,12]. It has been shown to have antioxidant, anti-inflammatory, anti-viral, anti-mutagenic, and anti-angiogenic capabilities [9,10,13,14,15,16,17]. Moreover, rosmarinic acid appears to be neuroprotective and has been demonstrated to induce neuroprotection from reactive glial cells in in vitro models of AD, spinal cord injury, and PD by inhibiting nitric oxide (NO) production [18,19,20]. Rosmarinic acid protected against memory deficits in ischemic mice and alleviated neurological symptoms in the G93A mutant hSOD1 mouse model of ALS [21,22,23].
Carnosic acid (Figure 1B), a polyphenolic compound also found in the rosemary herb, possesses many of the biological activities discussed above. The robust antioxidant activity of carnosic acid may be related to its ability to up-regulate endogenous free radical scavenging enzymes via activation of the Nrf2 transcriptional pathway [24,25]. In several in vitro models, carnosic acid has been shown to have protective effects against neurotoxicity by promoting pro-survival pathways including modulation of apoptosis, autophagy, and regulation of the parkin pathway [26,27]. Carnosic acid showed a neuroprotective effect both in vitro and in vivo in a mouse model of neurotoxicity and in a rat model of PD [28,29].
The purpose of this study was to directly compare the neuroprotective effects of rosmarinic acid and carnosic acid against cell death induced by nitrosative stress, excitotoxicity, and caspase activation in an in vitro model of primary rat cerebellar granule neuron (CGN) cultures. Apoptosis was measured morphologically by Hoechst staining to visualize nuclear size and morphology, in addition to bright field imaging or immunocytochemistry to visualize neuronal processes and the microtubule network, respectively. To further investigate the pro-survival pathway that carnosic acid activates to block caspase-dependent cell death, we used several different inhibitors, including wortmannin to inhibit PI3K, PD98059 to block MAPK (MEK1/2), and Akt inhibitor XIII to inhibit Akt-dependent pro-survival signaling. Our data demonstrate that rosmarinic acid and carnosic acid show overlapping and unique neuroprotective effects against diverse stressors that cause neuronal cell death. The unique neuroprotective effects of these two polyphenols has direct implications for designing future preclinical studies to evaluate the therapeutic potential of these compounds in neurodegenerative diseases.

Rosmarinic acid and carnosic acid each protect CGNs from nitrosative stress induced by sodium nitroprusside (SNP), an NO donor, which results in the formation of RNS and cell death. The efficacy of rosmarinic acid and carnosic acid to protect CGNs against SNP-induced nitrosative stress was examined. By assessing the nuclear morphology and by examining the state of the neuronal processes under bright field imaging, we show cytotoxic effects of SNP on CGNs. When incubated with SNP, the nuclei become condensed and fragmented compared to the nuclei of untreated control cells (Figure 2A). Additionally, the neuronal cell bodies are drastically diminished in size and the neuronal processes are essentially destroyed by SNP (Figure 2A). These detrimental effects of RNS were substantially reduced by co-incubating the CGNs with either 50 µM rosmarinic acid or 10 µM carnosic acid (Figure 2A). Quantification of these results is shown in Figure 2B as the percentage of apoptotic cells counted using Hoechst staining to assess nuclear morphology. Rosmarinic acid significantly reduced apoptotic cell death at concentrations of 50 µM and 100 μM. Carnosic acid demonstrated a more potent protective effect from RNS at concentrations of only 10 µM and 20 µM. Interestingly, for both compounds, the protection observed was somewhat greater at the lower concentration tested. Of note, at concentrations of over 20 µM and 100 µM for carnosic acid and rosmarinic acid, respectively, the compounds were somewhat toxic on their own to CGNs (data not shown).

5K apoptotic medium is a non-depolarizing, low potassium medium that causes cellular stress and subsequent caspase activation in CGNs [31,32]. Caspases induce apoptotic cell death when activated. There are several pro-survival signaling pathways that can be inactivated by 5K medium to allow caspase activation resulting in cell death. Stimulation of these pathways under 5K conditions can therefore lead to cell survival and neuroprotection. The specific pathways we tested in subsequent experiments were the pro-survival PI3K/Akt pathway and PI3K-dependent activation of a MEK/ERK pathway. As expected, incubation in 5K medium induced apoptosis of CGNs as seen by the characteristic nuclear condensation and microtubule disruption (Figure 4A). Carnosic acid co-incubation significantly protected CGNs against 5K-induced apoptosis. These results were again quantified from Hoechst-stained images and the percentage of apoptotic cells was determined (Figure 4B). To confirm the protective effects of carnosic acid against caspase-dependent apoptosis, we performed an MTT assay of cell viability. CGNs incubated in 5K medium caused significant cell death and cell viability is restored when co-incubated with carnosic acid (Figure 4C). Our data confirm the protective effects of carnosic acid against low potassium induced caspase-dependent apoptosis. In contrast to the results described above for excitoxicity, rosmarinic acid did not display any discernible protective effect against caspase activation while carnosic acid nearly completely protected against the 5K apoptotic insult at 10 μM and 20 μM concentrations.

Cerebellar granule neurons (CGNs) were isolated as previously described [52] from seven-day-old Sprague Dawley rat pups. Cells were plated on poly-l-lysine coated six-well plates (35 mm-diameter), with a density of approximately 2 × 106 cells/well in Basal Medium Eagle’s supplemented with 25 mM potassium chloride, 2 mM l-glutamate, 10% fetal bovine serum, and 2 mM penicillin-streptomycin (100 U/mL/100 µg/mL). Cytosine arabinoside (10 µM) was added to the culture medium 24 h after plating to inhibit the growth of non-neuronal cells. Cultures were ~95% pure for granule neurons. The resulting CGNs were then incubated at 37 °C in 10% CO2 for six to seven days in culture prior to experimentation. All animal manipulations were performed in accordance with a protocol approved by the University of Denver Institutional Animal Care and Use Committee.

Treatment with glutamate/glycine and SNP:CGNs were co-treated with either carnosic acid or rosmarinic acid and the stressors SNP (100 μM) or glutamate/glycine (100 μM/10 μM), for 24 h before fixation and Hoechst staining for quantification of cell death. For all experiments, an untreated control and an SNP- or glutamate/glycine-only control was used to compare cell death and neuroprotection. Prior to treatment, the plating medium was removed and replaced with serum free medium containing 25 mM potassium chloride to prevent any potential protective effects of the serum.

4.3.2. Protocol for Treatment with Inhibitors

Following treatment, CGNs were washed once with phosphate buffered saline (PBS; pH = 7.4) and fixed for one hour at room temperature in 4% paraformaldehyde. Cells were then washed again with PBS and stained with Hoechst at a concentration of 10 µg/mL. After washing with PBS, the cells were imaged using a Zeiss Axiovert-200M epi-fluorescence microscope. Five images were taken per well to assess apoptosis, with either duplicate or triplicate wells per experiment. Cells were counted and scored as either living or apoptotic based on nuclear morphology; CGNs having condensed or fragmented nuclei were counted as apoptotic. In some cases, the microtubule network was visualized by staining with an antibody to β-tubulin and a fluorescein isothiocyanate (FITC)-conjugated secondary antibody.

As an alternative means of assessing cell death, some experiments were evaluated using an MTT viability assay. MTT (3-(4,5-dimethylthiazol-2-yl)-2,5-diphenyltetrazolium bromide) is a tetrazolium dye which is reduced by NAD(P)H-dependent cellular oxidoreductase enzymes, primarily within the mitochondria of viable cells, to yield an insoluble formazan derivative which can be solubilized and assayed colorimetrically as an indicator of cell viability. MTT data presented were obtained from four wells per treatment.

Each experiment was performed using either duplicate or triplicate wells for each treatment, with each experiment being performed four independent times. Data are presented as the means ± SEM of the total number of experiments. Data was analyzed using a one-way ANOVA with a post hoc Tukey’s test. A p value of <0.05 was considered statistically significant.

This study was funded entirely by internal funds provided by the University of Denver to D.A.L. 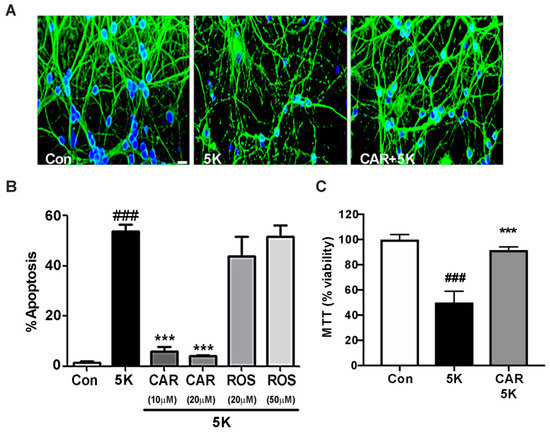