The neuropeptides, orexin A and orexin B (also known as hypocretins), are produced in hypothalamic neurons and belong to ligands for orphan G protein-coupled receptors. Generally, the primary role of orexins is to act as excitatory neurotransmitters and regulate the sleep process. Lack of orexins may lead to sleep disorder narcolepsy in mice, dogs, and humans. Narcolepsy is a neurological disorder of alertness characterized by a decrease of ability to manage sleep-wake cycles, excessive daytime sleepiness, and other symptoms, such as cataplexy, vivid hallucinations, and paralysis. Thus, the discovery of orexin receptors, modulators, and their causal implication in narcolepsy is the most important advance in sleep-research. The presented work is focused on the evaluation of compounds L1–L11 selected by structure-based virtual screening for their ability to modulate orexin receptor type 2 (OX2R) in comparison with standard agonist orexin-A together with their blood-brain barrier permeability and cytotoxicity. We can conclude that the studied compounds possess an affinity towards the OX2R. However, the compounds do not have intrinsic activity and act as the antagonists of this receptor. It was shown that L4 was the most potent antagonistic ligand to orexin A and displayed an IC50 of 2.2 µM, offering some promise mainly for the treatment of insomnia. View Full-Text
Keywords: orexin A; suvorexant; orexin receptor modulators; narcolepsy; structure-based virtual screening orexin A; suvorexant; orexin receptor modulators; narcolepsy; structure-based virtual screening
►▼ Show Figures 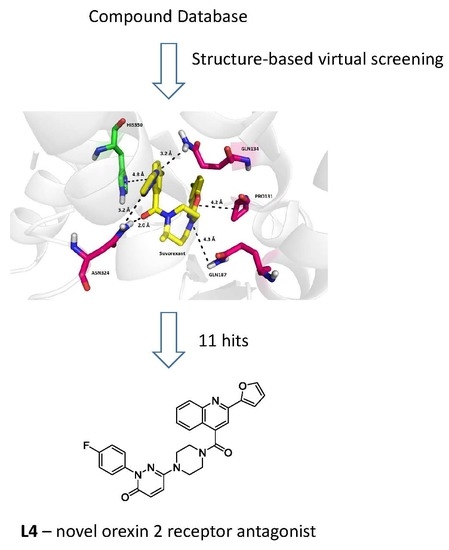