Oncidium is an important ornamental crop worldwide, and in recent years, the characteristics of the flower aroma have become a concern for breeders. This study used headspace solid-phase microextraction (HS-SPME) and gas chromatography/mass spectrometry (GC-MS) analysis of the volatile compounds to study the aroma characteristics of Onc. Rosy Sunset. A total of 45 compounds were identified, with the major compound being linalool. Onc. Rosy Sunset had the highest odor concentration from 10:00 to 12:00 and lowest from 20:00 to 24:00. The inflorescence emitted the highest quantities of volatile compounds during stages 3–6, which then decreased with the aging of the flowers. In Onc. Rosy Sunset, the sepals and petals were the major parts for the floral fragrance emission, in which linalool content was the highest, whereas the lip and column had a different composition of major volatile compounds, of which benzaldehyde, β-myrcene, and β-caryophyllene dominated. View Full-Text
Keywords: fragrance; Oncidium; headspace solid-phase microextraction (HS-SPME); flowering period; daily rhythm; perianth fragrance; Oncidium; headspace solid-phase microextraction (HS-SPME); flowering period; daily rhythm; perianth
►▼ Show Figures 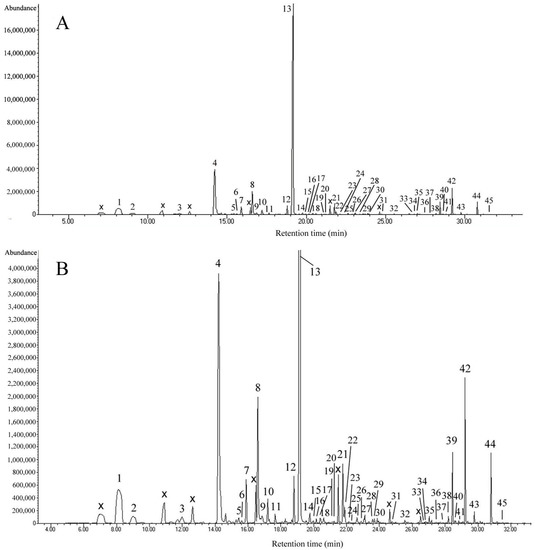