Supercritical CO2 Extraction of Nannochloropsis sp.: A Lipidomic Study on the Influence of Pretreatment on Yield and Composition
Previous Article in Journal

There are six tocol analogs present in palm oil, namely α-tocopherol (α-T), α-tocomonoenol (α-T1), α-tocotrienol (α-T3), γ-tocotrienol (γ-T3), β-tocotrioenol (β-T3) and δ-tocotrienol (δ-T3). These analogs were difficult to separate chromatographically due to their similar structures, physical and chemical properties. This paper reports on the effect of pressure and injection solvent on the separation of the tocol analogs in palm oil. Supercritical CO2 modified with ethanol was used as the mobile phase. Both total elution time and resolution of the tocol analogs decreased with increased pressure. Ethanol as an injection solvent resulted in peak broadening of the analogs within the entire pressure range studied. Solvents with an eluent strength of 3.4 or less were more suitable for use as injecting solvents. View Full-Text
Keywords: palm; supercritical fluid chromatography; tocol analogs; tocotrienol palm; supercritical fluid chromatography; tocol analogs; tocotrienol
►▼ Show Figures 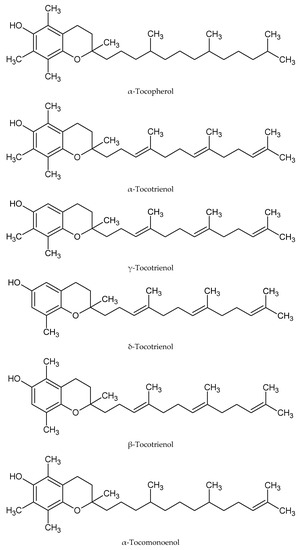