Substantial evidence has highlighted the crucial role of sustained inflammation in the pathogenesis of Type 2 diabetes (T2D) during the past decades. It is well established that liver inflammation caused by high fat diet (HFD) and obesity impairs hepatic glucose and lipid metabolism, leading to local and systemic insulin resistance, ultimately contributing to the development of T2D [1,2]. In particular, accumulating evidence suggests that inhibition of hepatic inflammatory response improves HFD and obesity-induced metabolic disorders, such as insulin resistance and hyperglycemia [3,4]. Though the role of liver inflammation in the development of T2D has been widely investigated, the triggering mechanisms underlying HFD and obesity-induced hepatic inflammation remain to be elucidated.
Nicotinamide adenine dinucleotide (NAD+), in addition to acting as a coenzyme, has been demonstrated to act as a key mediator in regulating a wide spectrum of physiological and pathological processes, such as metabolism, circadian rhythm, aging and cancer. Accumulating evidence has indicated that the level of NAD+ is declined due to the compromised NAD+ biosynthesis and the enhanced NAD+ breakdown in various tissues, including liver and fat, under HFD and obese conditions [5,6]. Recently, it is well established that loss of NAD+ is involved in the development of HFD and obesity-induced metabolic disorders, such as steatosis, dyslipidemia and insulin resistance [7,8]. Therefore, improving NAD+ metabolism has emerged as a potential therapeutic strategy for T2D and its complications. However, whether the dysregulation of NAD+ metabolism contributes to liver inflammation during T2D and the mechanisms underlying these effects remain to be investigated.
The NLR family, pyrin domain-containing 3 (NLRP3) inflammasome is an important member of the innate immune system, which is a cytoplasmic multi-protein complex composed of NLRP3, apoptosis-associated speck-like protein containing a CARD domain (ASC) and pro-cysteine aspartate-specific protease-1 (pro-caspase-1). Over the recent past, the importance of NLRP3 inflammasome-mediated caspase-1 activation and subsequent pro-inflammatory cytokines release as one of the contributing mechanisms to T2D has been recognized [9,10]. Indeed, emerging evidence demonstrates that NLRP3 inflammasome activation leads to hepatic metaflammation, contributing to abnormal lipid and glucose metabolism, exacerbating T2D and its complications [11,12]. Nevertheless, the mechanisms of NLRP3 inflammasome activation mediated by HFD and obesity are not fully understood.
Purple sweet potato color (PSPC) is a class of naturally occurring anthocyanins that is derived from purple sweet potato storage roots that reportedly has a variety of pharmacological properties including strong antioxidant, anti-inflammatory and neuroprotective effects [13,14,15]. Our previous work revealed that PSPC treatment protected mouse liver from D-galactose-induced oxidative stress, inflammation and hepatocyte apoptosis [16,17]. Recently, our studies indicated that PSPC treatment inhibited HFD-induced hepatic insulin resistance partly via repressing oxidative stress and endoplasmic reticulum stress (ER stress) [18]. Thus, PSPC could be regarded as a suitable candidate for pharmacological intervention of T2D. However, whether PSPC attenuates HFD-induced hepatic inflammation has never been investigated.
In the present study, we hypothesized that PSPC treatment might inhibit NLRP3 inflammasome activation-mediated hepatic inflammation via improving NAD+ metabolism in HFD-fed mice. The improvement of NAD+ metabolism could be a novel protective mechanism of PSPC against T2D and its complications. This study is designed to address these issues.

The mice fed an ND showed higher food intake than that of mice fed HFD due to the low energy density of the ND (Figure 1A). PSPC treatment did not significantly affect the food intake in either ND-fed mice or HFD-fed mice (Figure 1A).
Feeding HFD to mice for 20 weeks induced a marked increase in body weight, as well as in epididymal adipose tissue mass (Figure 1B,C). Moreover, HFD significantly elevated the levels of fasting blood glucose, serum insulin and HOMA index in mice (Figure 1D–F).
HFD-fed mice had remarkably higher levels of liver index and serum aminotransferase (ALT) than control mice (Figure 1G,H). The results of histological analysis showed that HFD treatment caused hepatocyte hypertrophy and vacuolization and inflammatory cell infiltration in mouse livers (Figure 1I), which confirmed an occurrence of obesity-related liver injury.
Interestingly, PSPC dramatically lowered body weight, epididymal adipose tissue mass, fasting blood glucose, serum insulin, HOMA index, liver index and serum ALT, and effectively improved these histopathological changes of livers in HFD-treated mice (Figure 1). There were no significant differences in obesity and liver injuries among the HFD + PSPC, PSPC and the control groups. These results indicate that PSPC effectively ameliorates obesity and liver injuries in HFD-treated mice.

Eighteen weeks after HFD feeding, some mice of the HFD group were divided into two subgroups: HFD-control group and HFD-NR group. NR (BOC Sciences, Shirley, NY, USA) was solubilized in phosphate buffered saline (PBS). Mice received a daily 300 mg/kg/day dose of NR or an equal volume of PBS during two weeks via oral gavage (see Table 2 for details). The NR dosage used in this study was based on the literature [54,55].
Food intake was measured every three days. After 20 weeks of treatment, mice were fasted overnight, anaesthetized and sacrificed. The liver, epididymal fat and blood were immediately collected for experiments or stored at −70 °C until analysis.

The preparation of liver homogenates were performed as described in our previous work [23,56]. The protein concentration were determined using the bicinchoninic acid assay kit (Pierce Biotechnology, Rockford, IL, USA) according to the manufacturer’s instructions.

The amounts of ROS were quantified as previously described based on the oxidation of 2′,7′-dichlorodihydrofluorescein diacetate (H2-DCF-DA) to 2′,7′-dichlorofluorescein (DCF) [23,56]. Briefly, the homogenate was diluted 1:20 (v/v) with ice-cold Locke’s buffer [154 mM NaCl, 5.6 mM KCl, 3.6 mM NaHCO3, 2.0 mM CaCl2, 10 mM D-glucose and 5 mM 4-(2-hydroxyethyl)-1-piperazine-ethanesulfonic acid, pH 7.4] to obtain a tissue concentration of 10 mg/mL. The reaction mixture (1 mL) containing Locke’s buffer, 0.2 mL of homogenate and 10 μL of 5 mM H2-DCF-DA was incubated for 15 min at room temperature to allow the H2-DCF-DA to be incorporated into any membrane-bound vesicles and the diacetate group to be cleaved by esterases. After 30 min of further incubation, the conversion of H2-DCF-DA to the fluorescent product DCF was measured using a Molecular Devices M2 plate reader (Molecular Devices Corporation, Menlo Park, CA, USA) with excitation at 484nm and emission at 530 nm. Background fluorescence (conversion of H2-DCF-DA in the absence of homogenate) was corrected by the inclusion of parallel blanks. ROS formation was quantified from a DCF standard curve. ROS level was expressed as pmol DCF formed/min/mg protein.

Liver slice collection and hematoxylin-eosin staining were performed according to the protocols described in our previous work [23,56]. The liver sections stained with hematoxylin-eosin (Sigma-Aldrich, St. Louis, MO, USA) were examined by an expert liver pathologist blinded to the treatment groups.

NAD+ levels were measured using EnzyChromTM NAD+/NADH Assay kit (BioAssay Systems, Hayward, CA, USA) following the manufacturer’s instructions. Briefly, ~20 mg liver tissue from each sample was homogenized in 100 μL NAD extraction buffer. Liver extracts were heated at 60 °C for 5 min and were then neutralized by the addition of 100 μL of NADH and 20 μL assay buffer. The NAD containing supernatants were obtained by centrifuging the liver extracts at 14,000 rpm for 5 min. 80 μL working reagent was added to 40 μL of NAD standard and samples in a 96-well plate. OD at time “zero” was read at 565 nm. OD15 was read after a 15-min incubation at room temperature. The OD0 values were subtracted from OD15 values for concentration analysis. The NAD levels of unknown samples were calculated from the standard curve and expressed as pmol/mg liver. 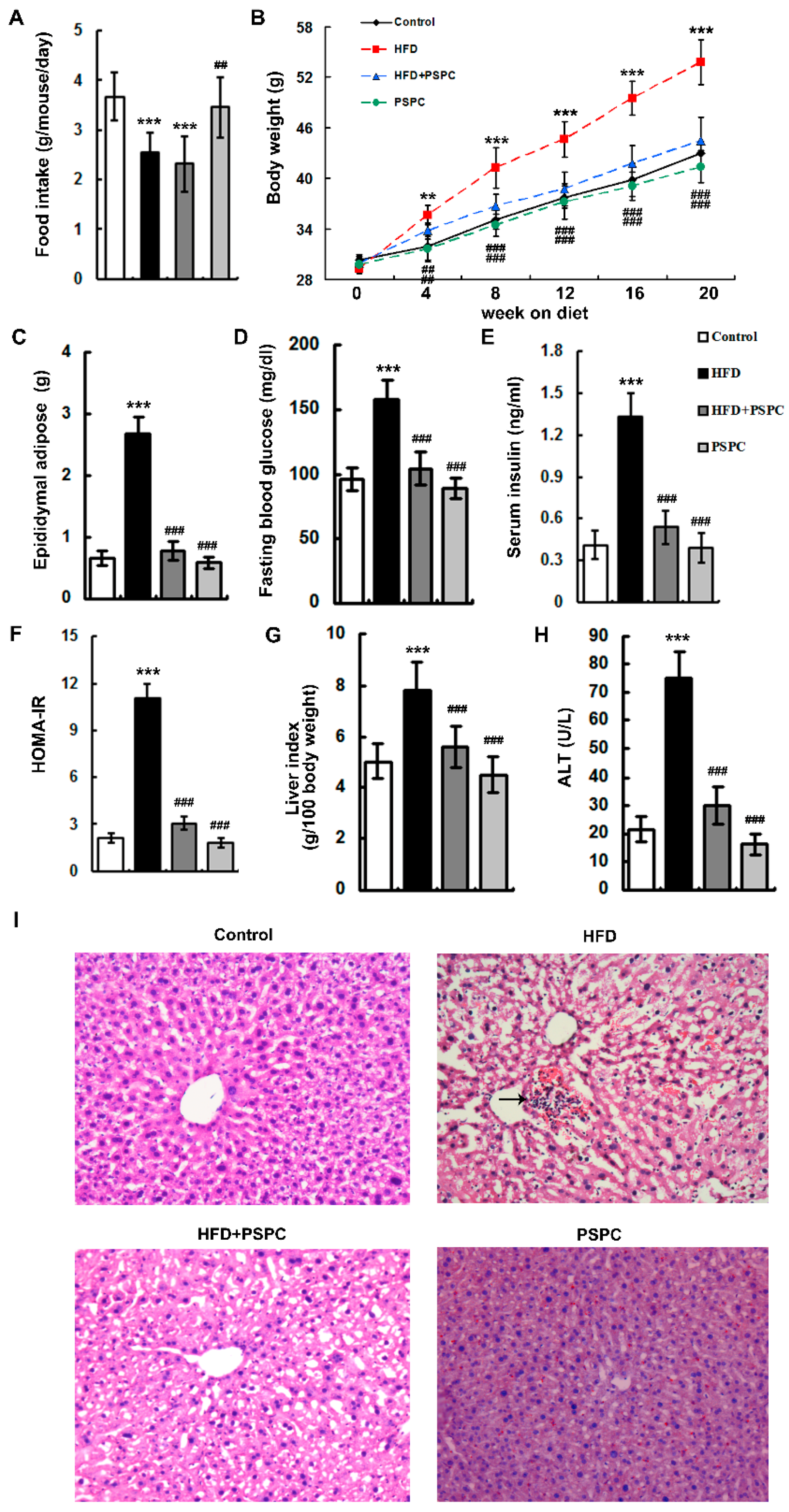 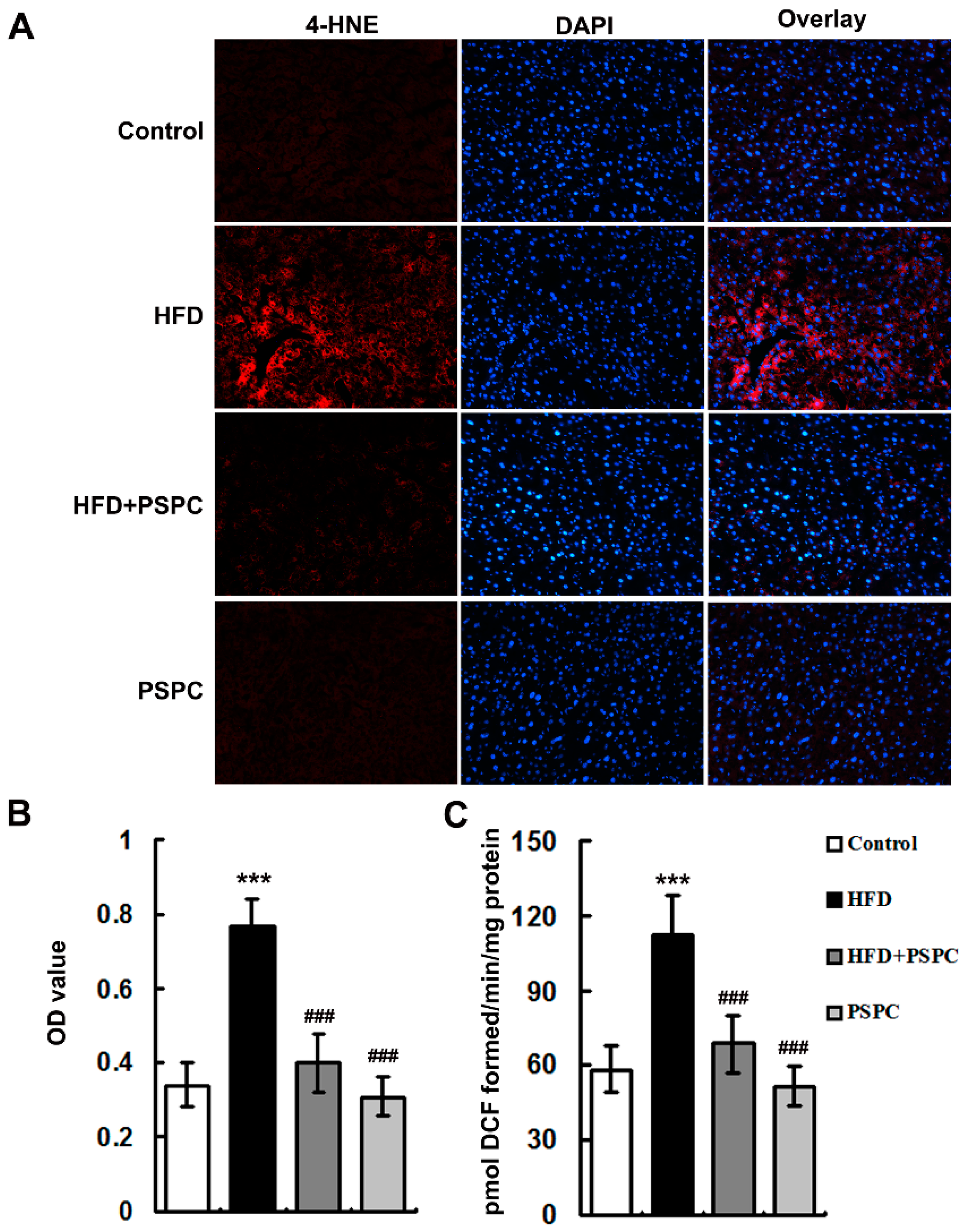 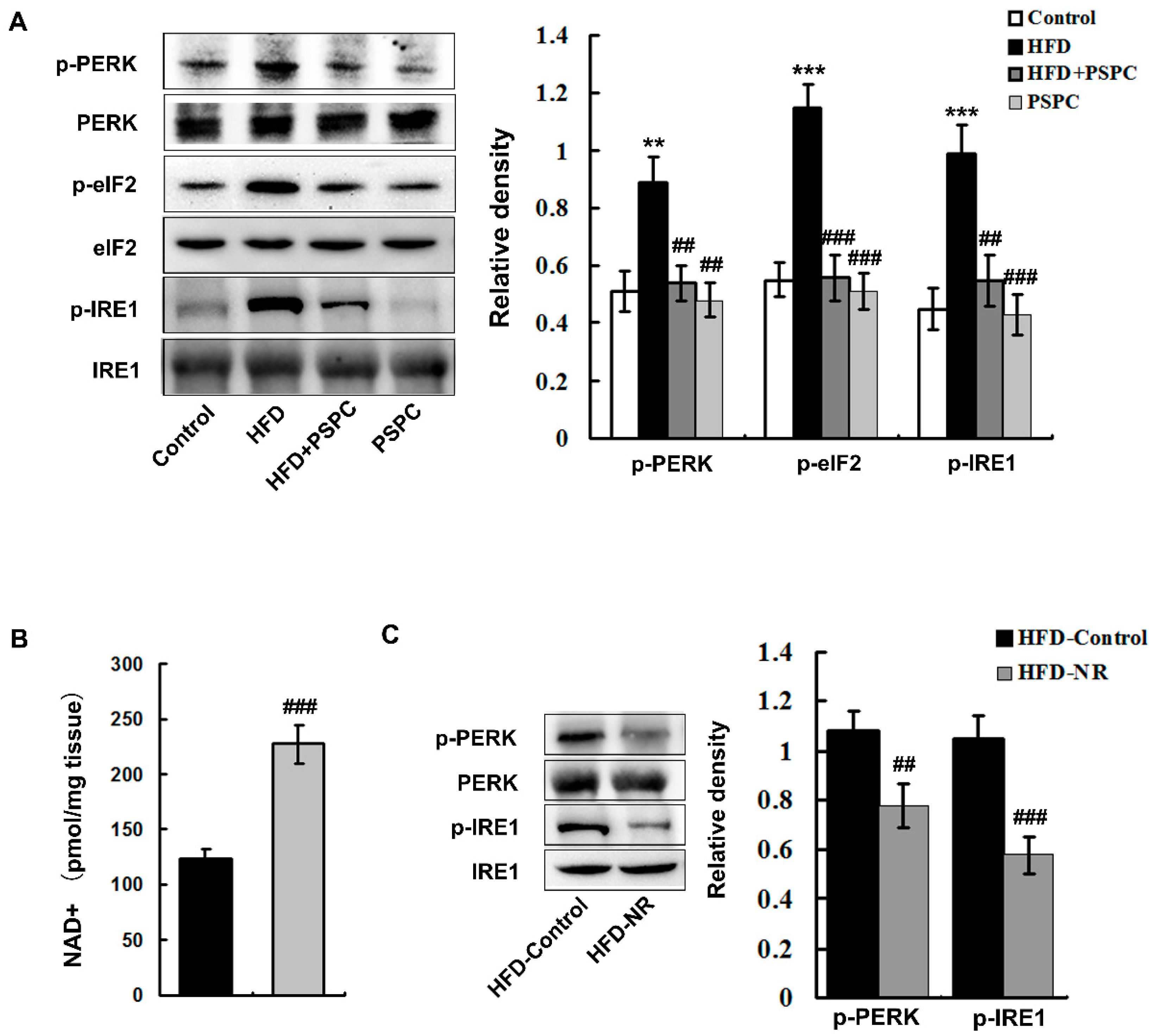 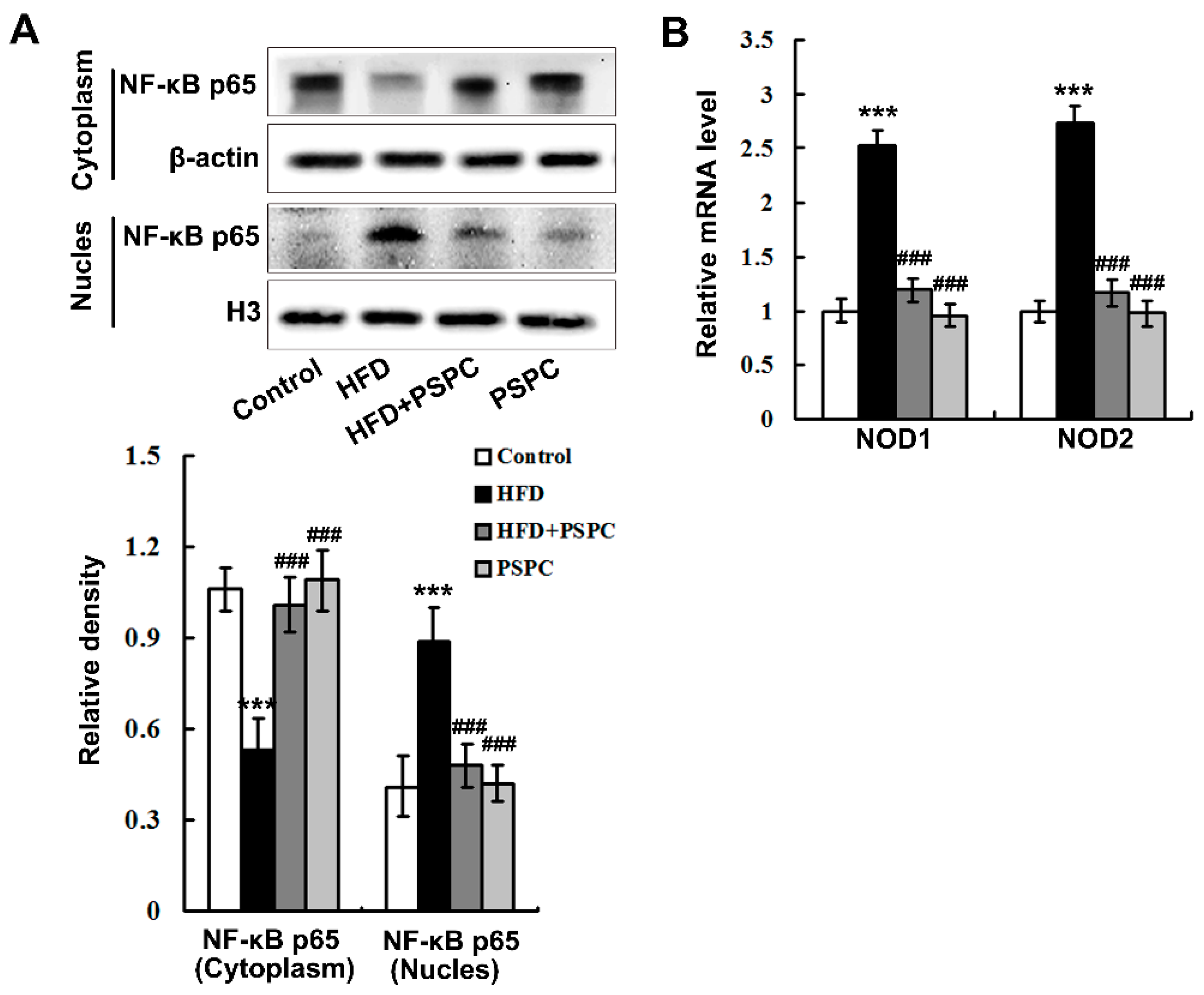 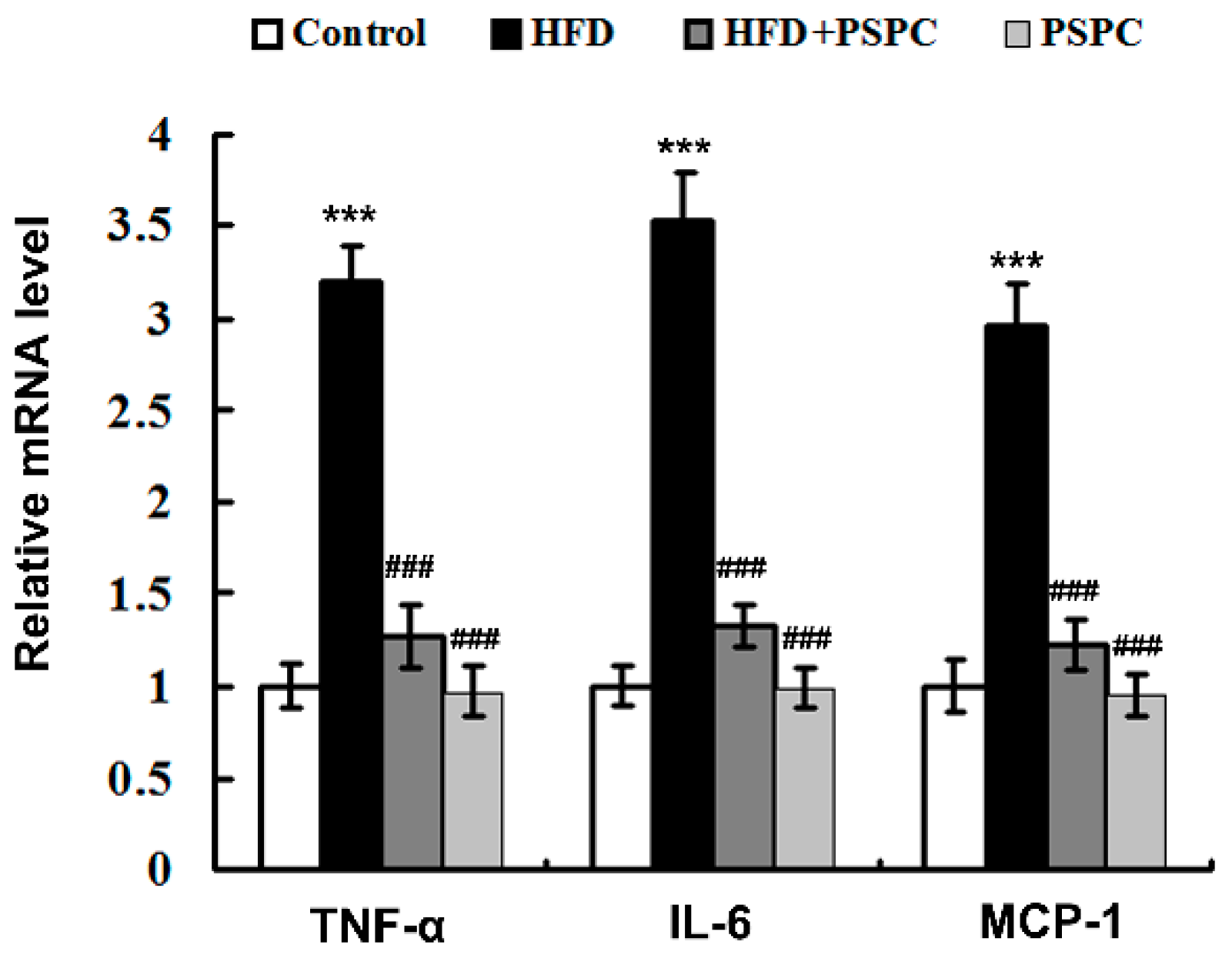