Characterization and Purification of Bergamottin from Citrus grandis (L.) Osbeck cv. Yongjiazaoxiangyou and Its Antiproliferative Activity and Effect on Glucose Consumption in HepG2 cells
Next Article in Special Issue

Synthesis of Compounds of the Pyrimidine Series Based on the Reactions of 3-Arylmethylidenefuran-2(3H)-ones with N,N-Binucleophilic Reagents
Previous Article in Journal

Recently, we demonstrated that the natural cytokinin nucleosides N6-isopentenyladenosine (iPR) and N6-benzyladenosine (BAPR) exert a potent and selective antiviral effect on the replication of human enterovirus 71. In order to further characterize the antiviral profile of this class of compounds, we generated a series of fluorinated derivatives of BAPR and evaluated their activity on the replication of human enterovirus 71 in a cytopathic effect (CPE) reduction assay. The monofluorination of the BAPR-phenyl group changed the selectivity index (SI) slightly because of the concomitant high cell toxicity. Interestingly, the incorporation of a second fluorine atom resulted in a dramatic improvement of selectivity. Moreover, N6-trifluoromethylbenzyladenosine derivatives (9–11) exhibited also a very interesting profile, with low cytotoxicity observed. In particular, the analogue N6-(3-trifluoromethylbenzyl)-adenosine (10) with a four-fold gain in potency as compared to BAPR and the best SI in the class represents a promising candidate for further development. View Full-Text
Keywords: fluorinated N6-benzyladenosines; synthesis and antiviral activity; SAR; enterovirus 71 fluorinated N6-benzyladenosines; synthesis and antiviral activity; SAR; enterovirus 71
►▼ Show Figures 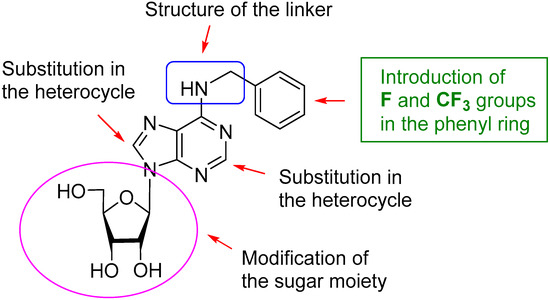