In this paper, a Whole-Bacteria SELEX (WB-SELEX) strategy was adopted to isolate specific aptamers against Shigella sonnei. Real-time PCR amplification and post-SELEX experiment revealed that the selected aptmers possessed a high binding affinity and specificity for S. sonnei. Of the 21 aptamers tested, the C(t) values of the SS-3 and SS-4 aptamers (Ct = 13.89 and Ct = 12.23, respectively) had the lowest value compared to other aptamer candidates. The SS-3 and SS-4 aptamers also displayed a binding affinity (KD) of 39.32 ± 5.02 nM and 15.89 ± 1.77 nM, respectively. An aptamer-based fluorescent biosensor assay was designed to detect and discriminate S. sonnei cells using a sandwich complex pair of SS-3 and SS-4. The detection of S. sonnei by the aptamer based fluorescent biosensor platform consisted of three elements: (1) 5’amine-SS-4 modification in a 96-well type microtiter plate surface (N-oxysuccinimide, NOS) as capture probes; (2) the incubation with S. sonnei and test microbes in functionalized 96 assay wells in parallel; (3) the readout of fluorescent activity using a Cy5-labeled SS-3 aptamer as the detector. Our platform showed a significant ability to detect and discriminate S. sonnei from other enteric species such as E. coli, Salmonella typhimurium and other Shigella species (S. flexneri, S. boydii). In this study, we demonstrated the feasibility of an aptamer sensor platform to detect S. sonnei in a variety of foods and pave the way for its use in diagnosing shigellosis through multiple, portable designs. View Full-Text
Keywords: shigellosis; aptamer-based fluorescent biosensor; whole cell-SELEX; DNA aptamer shigellosis; aptamer-based fluorescent biosensor; whole cell-SELEX; DNA aptamer
►▼ Show Figures 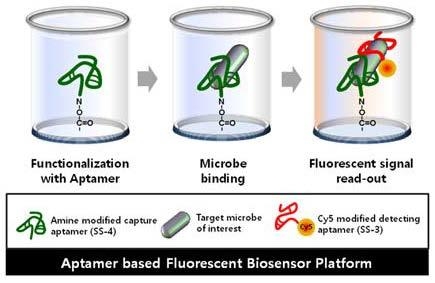