Bioassay-Guided Isolation of Anti-Inflammatory Components from the Bulbs of Lilium brownii var. viridulum and Identifying the Underlying Mechanism through Acting on the NF-κB/MAPKs Pathway

The present study investigates the involvement of the l-arginine-Nitric Oxide-cGMP-K+ ATP pathways responsible for the action of anti-allodynic and antihyperalgesic activities of zerumbone in chronic constriction injury (CCI) induced neuropathic pain in mice. The role of l-arginine-NO-cGMP-K+ was assessed by the von Frey and the Randall-Selitto tests. Both allodynia and hyperalgesia assessments were carried out on the 14th day post CCI, 30 min after treatments were given for each respective pathway. Anti-allodynic and antihyperalgesic effects of zerumbone (10 mg/kg, i.p) were significantly reversed by the pre-treatment of l-arginine (10 mg/kg), 1H [1,2,4]Oxadiazole[4,3a]quinoxalin-1-one (ODQ), a soluble guanosyl cyclase blocker (2 mg/kg i.p.) and glibenclamide (ATP-sensitive potassium channel blocker) (10 mg/kg i.p.) (p < 0.05). Taken together, these results indicate that systemic administration of zerumbone produces significant anti-allodynic and antihyperalgesic activities in neuropathic pain in mice possibly due to involvement of the l-arginine-NO-cGMP-PKG-K+ ATP channel pathways in CCI model.
Keywords: zerumbone; chronic constriction injury (CCI); neuropathic pain; nitric oxide; NO-cGMP pathway zerumbone; chronic constriction injury (CCI); neuropathic pain; nitric oxide; NO-cGMP pathway

Neuropathic pain has become a common issue that affects millions of people around the world [1]. Moreover, the Quick Reference Guide on Management of Cancer Pain, 2010, from the Ministry of Health in Malaysia, classified neuropathic pain as a challenging pain syndrome critically in need of adjuvant analgesics and additional interventions. The International Association Study of Pain (IASP) defines neuropathic pain as a pain that is caused by a lesion or disease on the somatosensory system. Thus, this type of pain is often associated with diseases or injuries to the peripheral and central nervous system that usually causes abnormal processing of sensory input [2,3].
Existing treatments such as non-steroidal anti-inflammatory drugs (NSAIDs) and opiates show little success with a limited response to neuropathic pain [4]. Additionally, commonly used medications for neuropathic pain result in numerous side effects, have unpredictable effectiveness, require complex dosing, with delayed analgesic onset, and also somehow reduces the patient’s quality of life [2,5].
Zerumbone is a bioactive sesquiterpene isolated from Zingiber zerumbet Smith. Zerumbone has been studied extensively in both in vivo and in vitro models [6]. Zerumbone has medicinal properties, with reports on its anti-nociceptive [7], anti-inflammatory [8] and, anti-tumor activities [9,10]. Our previous report showed that zerumbone possesses anti-allodynic and antihyperalgesic activities in chronic constriction injury (CCI) in animal models of neuropathic pain [11]. Other than that, we have recently reported the involvement of the serotonergic system in the anti-allodynic and antihyperalgesic activities of zerumbone in neuropathic pain [12]. Therefore, these findings suggest that the mechanism of action of zerumbone may also be linked to pathways associated with the neuropathic pain mechanism, one of which is the l-arginine-nitric oxide-cyclic guanosine monophosphate (cGMP)-K+ATP pathway.
l-arginine synthesizes nitric oxide (NO) from calcium-dependent constitutive isoforms of NO synthases (NOS)—neuronal NOS (nNOS), endothelial NOS (eNOS), or calcium-independent inducible NOS (iNOS) [13]. Previous reports have shown the involvement of NO in nociceptive synaptic transmission in both the central (CNS) and peripheral nervous systems (PNS) [13,14]. Increase in NO synthesis leads to release of excitatory neuropeptides, cytokines, and neurotransmitters. Indeed, NO is said to be involved in the maintenance of allodynia and hyperalgesia as NO synthases are up-regulated after nerve injury [14,15,16,17,18,19,20,21,22,23,24]. The enzyme guanylate cyclase (GC) is activated by NO, whereby its activation promotes the production of cGMP from GTP [25]. Previous studies have also suggested the possible role of the NO-cGMP pathway in activating other targets such as cGMP dependent protein kinase (PKG) and potassium channels (K+) [26,27,28,29]. Opening of potassium channels due to the l-arginine-NO-cGMP pathway allows regulation of the neuronal excitability through K+ ions permeating the membrane [30]. Studies have shown that opening of potassium channels results in antinociception [31,32].
On the basis of our previous work, zerumbone has shown to induce the antinociceptive effect in the chemical model of nociception in mice through the inhibition of the l-arginine-nitric oxide-cGMP-K+ATP channel pathways [7]. Hence, we hypothesized similar involvement of this pathway in the mechanism of action of zerumbone in neuropathic pain. This study attempts to verify the possible mechanisms of action of zerumbone through the involvement of NO/cGMP/K+ATP pathway linked to the anti-allodynic and antihyperalgesic activities of zerumbone, which could be a good prospect for the development of a new treatment in relieving neuropathic pain.

The cyclic GMP involvement was investigated by using the soluble guanosyl cyclase blocker (ODQ) and it demonstrated that cGMP is associated with the zerumbone anti-allodynic and antihyperalgesic effect. Pre-treatment of ODQ (2 mg/kg) with zerumbone significantly blocked the anti-allodynic effect of zerumbone (10 mg/kg) (p < 0.001) (Figure 3). Similarly, pre-treatment of ODQ (2 mg/kg) also reversed the antihyperalgesic effect caused by zerumbone (10 mg/kg) (p < 0.001) (Figure 4).

In order to evaluate the sedative effect of treatments, mice from the sham, vehicle and zerumbone (10 mg/kg, i.p.) groups, were tested for their ability to balance on the rotating bar. The figure (Figure 7) clearly depicts that all the mice from the three groups were able to maintain their balance throughout the entire length of testing.

Male ICR mice (25–35 g) were used in this study. All mice (n = 8 mice in each group) were housed under 12 h light-dark cycles with the environment maintained at 20–24°C. The animals were allowed free access to tap water and commercial pellet. All experiments were conducted between 8:00 a.m. and 5:00 p.m. The handling of mice was based on Zimmermann [71] in accordance with Ethical Guidelines for Investigation of Experimental Pain in Conscious Animals as issued by the International Association for the Study of Pain. The protocol and procedure of the experiment has been approved by Institutional Animal Care and Use Committee (IACUC) UPM (UPM/IACUC/AUP-R060/2013).

Neuropathic pain was induced in mice by performing chronic constriction injury (CCI) of the common sciatic nerve as previously described by Bennett and Xie [72,73]. The CCI model has proven to be the best animal model, compared to other models, as it produces the most sustained response in peripheral nerve injury [4]. Briefly, mice were deeply anesthetized with tribromoethanol (250 mg/kg, i.p.) and the fur on the left thigh region was shaved. The left common sciatic nerve was isolated from adherent tissue and exposed at the mid-thigh by blunt dissection through the biceps femoris.
The common sciatic nerve that is proximal to the trifurcation was loosely ligated with one ligature using chromic silk suture Deme Tech until a slight twitch was observed in the expected hind limb. Then, the skin layer was immediately sutured with the absorbable synthetic braided suture Vigilenz (Brilon, Germany). Lastly, iodine was applied externally with a cotton swab on the site of the incision. Another group that consisted of sham mice were used for lesion-injured mice or the control group. This group of animals were subjected to the same procedure, excluding the ligation of the sciatic nerve.

4.3. Preparation of Zerumbone for Experiments

Zerumbone was prepared by dissolving in dimethylsulfoxide (DMSO), Tween 20 and normal saline (0.99% NaCl) in a 5:5:90 (v/v/v) fraction. The final concentration of DMSO did not exceed 5% and caused no detectable effect by itself.

4.4. Preparation of Drugs and Chemicals

Tactile allodynia was evaluated by measuring the hind paw withdrawal response to a semi-flexible von Frey filament using an Electronic von Frey Anesthesiometer (IITC, Woodland Hills, CA, USA). Mice were placed individually in clear Plexiglas boxes on top of a wire mesh grid to allow the access to the ventral surface of the hind paws. Prior to the test, mice were allowed to habituate for at least 10 min, until their exploratory behaviour diminished before stimulation was initiated. A semi-flexible probe was applied vertically to the midplantar left and right hind paws with a gradual increase in pressure until the paw was withdrawn or elevated slowly which indicated a maximal force. Hence, the maximum applied pressure was noted when the probe was retracted. Both ipsilateral and contralateral hind paws were tested. These steps were repeated three times and the average measurement was calculated and recorded [74]. Mice that exhibited motor deficits during the pre-operative day and the post-operative days were excluded from further study.

The response towards mechanical hyperalgesia was assessed according to a Randall-Selitto Pressure Analgesiometer (IITC, Woodland Hills, CA, USA) based on the method previously described by [75]. The mice were habituated to the testing procedure a day before the experiment. They were restrained using a clean cloth and one paw at a time was placed in between the pressure applicator. An incremental pressure was applied gently onto the dorsal surface of the ipsilateral and contralateral paw, and the pressure (g) that showed the first nociceptive response such as squealing or paw withdrawal was recorded as the pain threshold. The stimulus was applied on both paws with a cut-off pressure of 250 g. Mice that exhibited motor deficits during the pre-operative day or the post-operative days were excluded from further study.

Rota rod analysis was carried out to test the possible sedative effect of zerumbone treatment. Mice in the sham, vehicle, and zerumbone groups were placed on the rota rod (UgoBasile, Varese, Italy) bar rotating at 20 rpm, 30 min after drug administration. The time spent by the mice on the rotating bar was recorded and a cut-off time of 3 min was employed after which the mice were returned to their respective home cages.

Zerumbone displayed inhibition to nitric oxide production, which can indirectly reduce the activation of NOS. The presence of cGMP is essential for zerumbone to exhibit its anti-allodynic and antihyperalgesic activities. Zerumbone is also suggested to exert its activity by the opening of K+ channels that help in reducing membrane excitability. In brief, we conclude that the anti-allodynic and antihyperalgesic activity of zerumbone is mediated through the l-arginine/NO-cGMP/ATP-sensitive K+ channel pathway. These findings suggest that zerumbone acts as a promising novel therapeutic agent for neuropathic pain. More extensive studies are needed to elucidate the detailed mechanism of action involved in zerumbone.

The authors thank the Faculty of Medicine and Health Sciences, Universiti Putra Malaysia, and the Physiology Laboratory for providing the necessary equipment for this study. This research was supported by the Fundamental Research Grant Scheme (5524278/04-01-13-1197FR) from the Ministry of Higher Education, Malaysia. 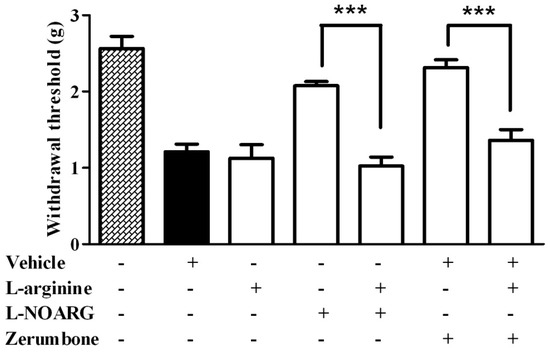 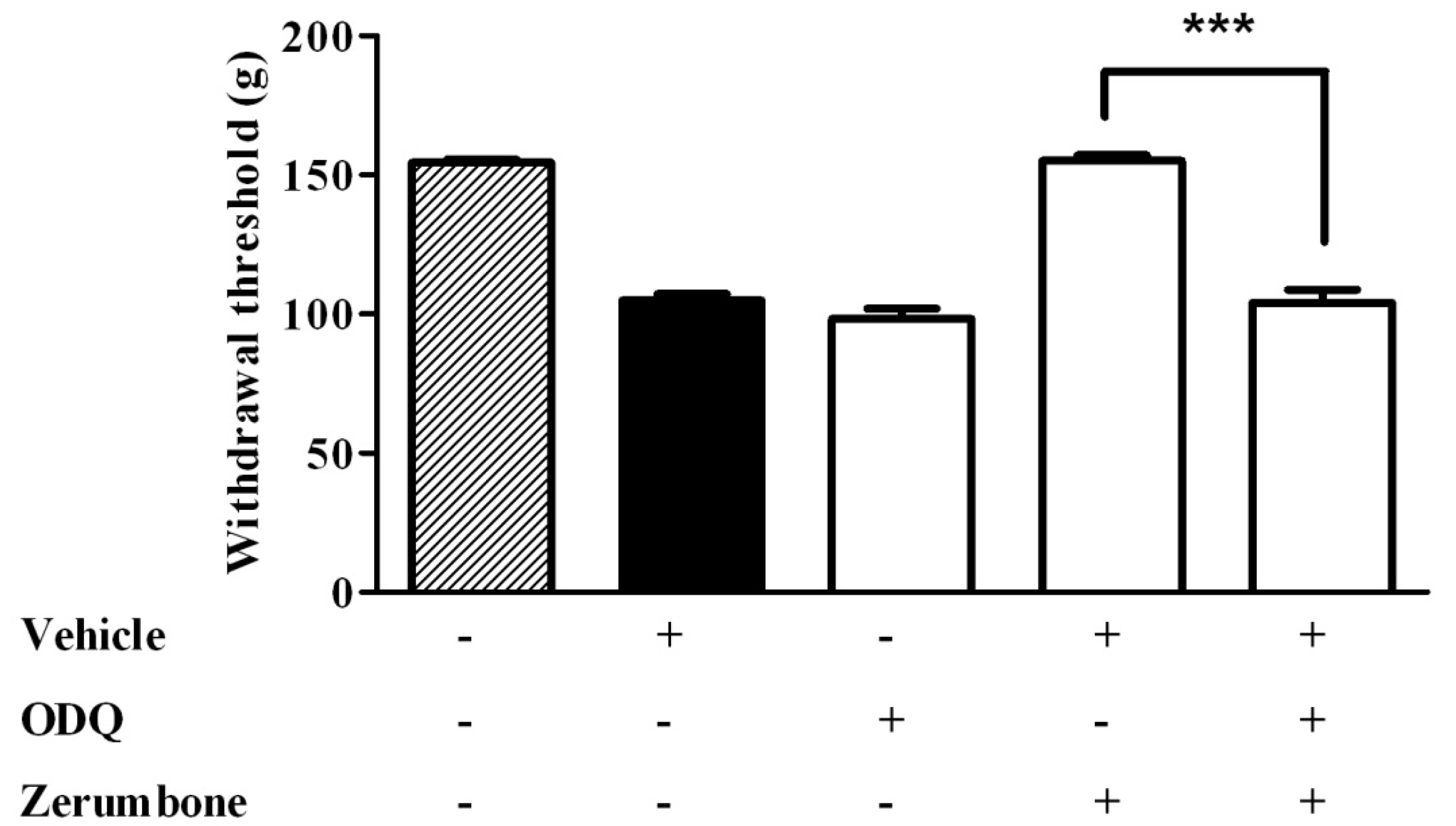 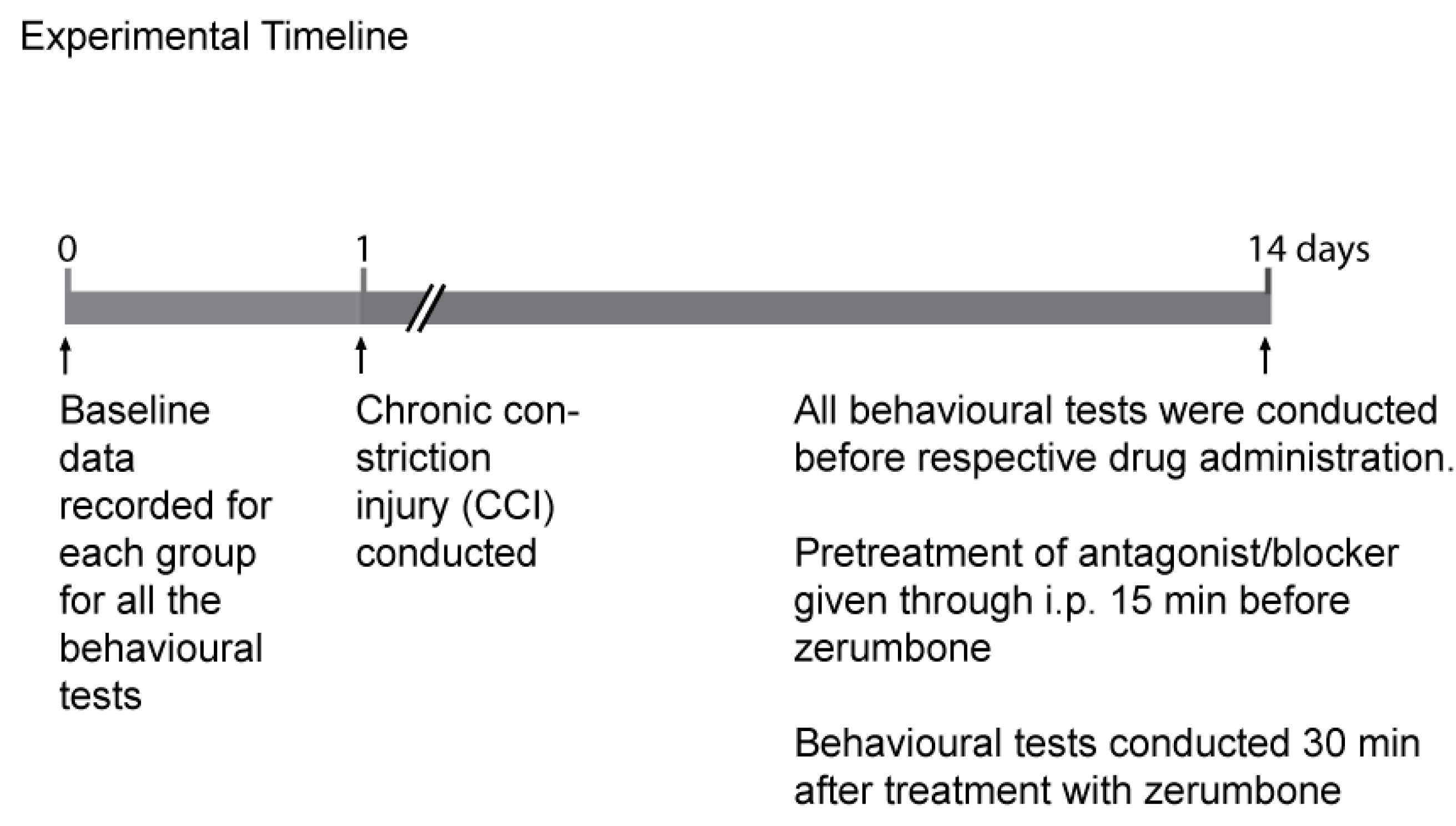 Table 1. Experimental Groups.
Table 1. Experimental Groups.
© 2017 by the authors. Licensee MDPI, Basel, Switzerland. This article is an open access article distributed under the terms and conditions of the Creative Commons Attribution (CC BY) license (http://creativecommons.org/licenses/by/4.0/).
We use cookies on our website to ensure you get the best experience. Read more about our cookies here.
Accept
We have just recently launched a new version of our website. Help us to further improve by taking part in this short 5 minute survey here. here.
Never show this again