Synthesis and Cytotoxicity of N-Substituted Dibenzo[a,j]xanthene-3,11-dicarboxamide Derivatives
Next Article in Special Issue

Solanesol is a non-cyclic terpene alcohol composed of nine isoprene units that mainly accumulates in solanaceous plants. Solanesol plays an important role in the interactions between plants and environmental factors such as pathogen infections and moderate-to-high temperatures. Additionally, it is a key intermediate for the pharmaceutical synthesis of ubiquinone-based drugs such as coenzyme Q10 and vitamin K2, and anti-cancer agent synergizers such as N-solanesyl-N,N′-bis(3,4-dimethoxybenzyl) ethylenediamine (SDB). In plants, solanesol is formed by the 2-C-methyl-d-erythritol 4-phosphate (MEP) pathway within plastids. Solanesol’s biosynthetic pathway involves the generation of C5 precursors, followed by the generation of direct precursors, and then the biosynthesis and modification of terpenoids; the first two stages of this pathway are well understood. Based on the current understanding of solanesol biosynthesis, we here review the key enzymes involved, including 1-deoxy-d-xylulose 5-phosphate synthase (DXS), 1-deoxy-d-xylulose 5-phosphate reductoisomerase (DXR), isopentenyl diphosphate isomerase (IPI), geranyl geranyl diphosphate synthase (GGPPS), and solanesyl diphosphate synthase (SPS), as well as their biological functions. Notably, studies on microbial heterologous expression and overexpression of key enzymatic genes in tobacco solanesol biosynthesis are of significant importance for medical uses of tobacco. View Full-Text
Keywords: solanesol; function; biosynthetic pathway; key enzymes solanesol; function; biosynthetic pathway; key enzymes
►▼ Show Figures 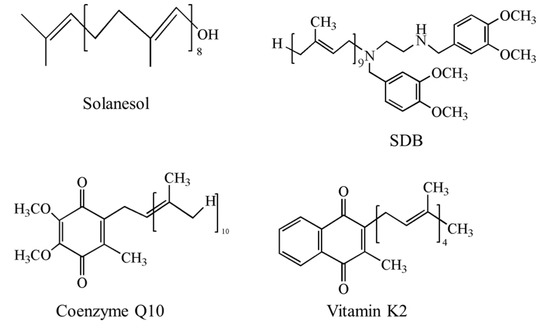