Species of Tagetes, which belong to the family Asteraceae show different characteristics including, bloom size, shape, and color; plant size; and leaf shape. In this study, we determined the differences in primary metabolites and carotenoid yields among six cultivars from two Tagetes species, T. erecta and T. patula. In total, we detected seven carotenoids in the examined cultivars: violaxanthin, lutein, zeaxanthin, α-carotene, β-carotene, 9-cis-β-carotene, and 13-cis-β-carotene. In all the cultivars, lutein was the most abundant carotenoid. Furthermore, the contents of each carotenoid in flowers varied depending on the cultivar. Principal component analysis (PCA) facilitated metabolic discrimination between Tagetes cultivars, with the exception of Inca Yellow and Discovery Orange. Moreover, PCA and orthogonal projection to latent structure-discriminant analysis (OPLS-DA) results provided a clear discrimination between T. erecta and T. patula. Primary metabolites, including xylose, citric acid, valine, glycine, and galactose were the main components facilitating separation of the species. Positive relationships were apparent between carbon-rich metabolites, including those of the TCA cycle and sugar metabolism, and carotenoids. View Full-Text
Keywords: Tagetes; marigold; carotenoid; metabolic profiling; GC-TOFMS Tagetes; marigold; carotenoid; metabolic profiling; GC-TOFMS
►▼ Show Figures 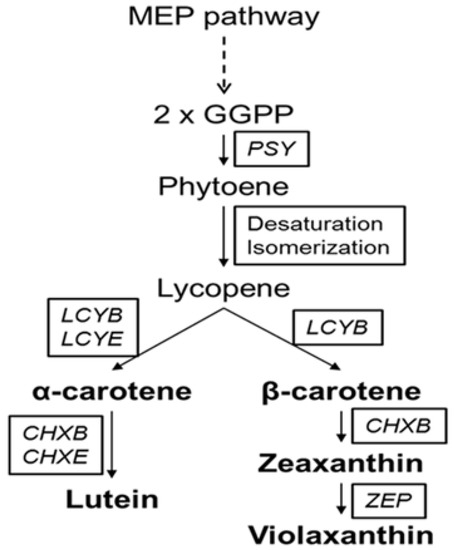