Eucommia ulmoides is a model representative of the dioecious plants with sex differentiation at initiation. Nevertheless, the genetic mechanisms of sexual dimorphism and sex determination in E. ulmoides remain poorly understood. In this study de novo transcriptome sequencing on Illumina platform generated >45 billion high-quality bases from fresh leaves of six male and female individuals of E. ulmoides. A total of 148,595 unigenes with an average length of 801 base-pairs (bp) were assembled. Through comparative transcriptome analyses, 116 differentially expressed genes (DEGs) between the males and the females were detected, including 73 male-biased genes and 43 female-biased genes. Of these DEGs, three female-biased genes were annotated to be related with the sexually dimorphic gutta content in E. ulmoides. One male-biased DEG was identified as putative MADS box gene APETALA3, a B class floral organ identity gene in the flowering plants. SNPs calling analyses further confirmed that the APETALA3-like gene was probably involved in the sex determination in E. ulmoides. Four other male-biased DEGs were potential sex-associated genes as well with segregated SNPs in accord with sex type. In addition, the SNPs density was 1.02 per kilobase (kb) in the expressed genes of E. ulmoides, implying a relatively high genetic diversity. View Full-Text
Keywords: Eucommia ulmoides; dioecious plant; sexual dimorphism; sex-associated genes; transcriptome sequencing Eucommia ulmoides; dioecious plant; sexual dimorphism; sex-associated genes; transcriptome sequencing
►▼ Show Figures 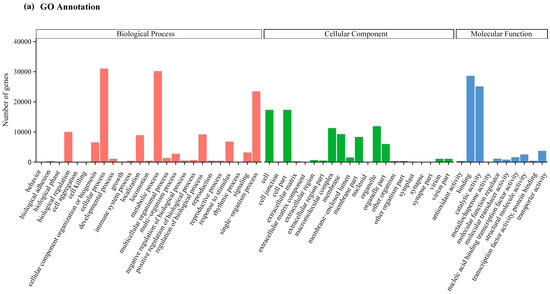