The bacterioferritin from E. coli (BFR), a maxi-ferritin made of 24 subunits, has been utilized as a model to study the fundamentals of protein folding and self-assembly. Through structural and computational analyses, two amino acid residues at the B-site interface of BFR were chosen to investigate the role they play in the self-assembly of nano-cage formation, and the possibility of building aromatic interaction networks at B-type protein–protein interfaces. Three mutants were designed, expressed, purified, and characterized using transmission electron microscopy, size exclusion chromatography, native gel electrophoresis, and temperature-dependent circular dichroism spectroscopy. All of the mutants fold into α-helical structures and possess lowered thermostability. The double mutant D132W/N34W was 12 °C less stable than the wild type, and was also the only mutant for which cage-like nanostructures could not be detected in the dried, surface-immobilized conditions of transmission electron microscopy. Two mutants—N34W and D132W/N34W—only formed dimers in solution, while mutant D132W favored the 24-mer even more robustly than the wild type, suggesting that we were successful in designing proteins with enhanced assembly properties. This investigation into the structure of this important class of proteins could help to understand the self-assembly of proteins in general. View Full-Text
Keywords: nano-cage; ferritin; B-site interface; self-assembly; protein–protein interaction; protein design nano-cage; ferritin; B-site interface; self-assembly; protein–protein interaction; protein design
►▼ Show Figures 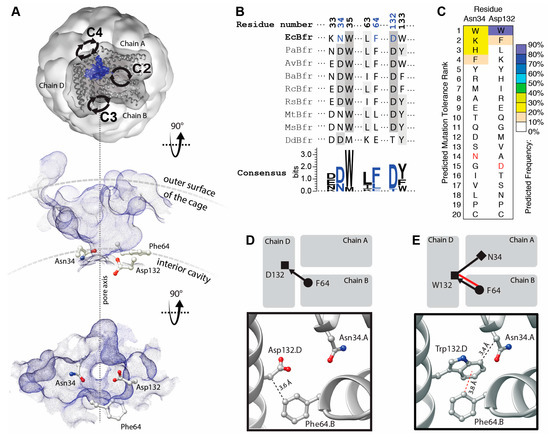