Angelica gigas Nakai (AGN) is a crucial oriental medicinal herb that grows especially in Korea and the Far-East countries. It contains chemically active compounds like pyranocoumarins, polyacetylenes and essential oils, which might be useful for treatment of several chronic diseases. It has been used for centuries as a traditional medicine in Southeast Asia, but in Western countries is used as a functional food and a major ingredient of several herbal products. The genus Angelica is also known as ‘female ginseng’ due to its critical therapeutic role in female afflictions, such as gynecological problems. However, it is well-documented that the AGN pyranocoumarins may play vital beneficial roles against cancer, neurodisorders, inflammation, osteoporosis, amnesia, allergies, depression, fungi, diabetes, ischemia, dermatitis, reactive oxygen species (ROS) and androgen. Though numerous studies revealed the role of AGN pyranocoumarins as therapeutic agents, none of the reviews have published their molecular mechanism of action. To the best of our knowledge, this would be the first review that aims to appraise the biosynthesis of AGN’s major active pyranocoumarins, discuss effective extraction and formulation methods, and detail the molecular action mechanism of decursin (D), decursinol angelate (DA) and decursinol (DOH) in chronic diseases, which would further help extension of research in this area. View Full-Text
Keywords: natural medicine; Korean dang-gui; apoptosis; cancer; decursin natural medicine; Korean dang-gui; apoptosis; cancer; decursin
►▼ Show Figures 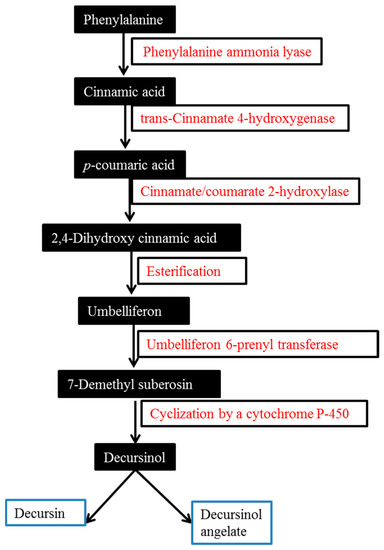